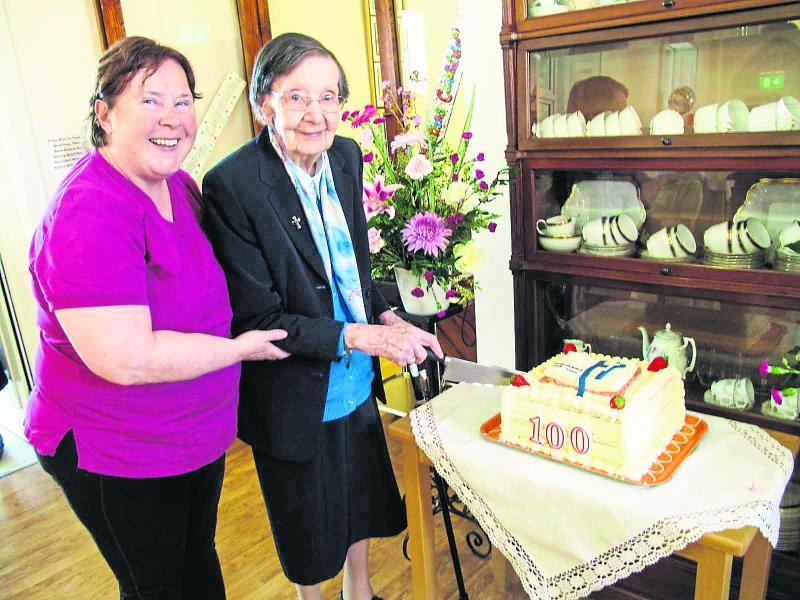 Sr Mary DeChantal, Convent of Mercy, Longford, cutting the cake to mark her 100th birthday. Also in the photo is Monica Smith

Sr Mary De Chantal Gilfillan celebrated her 100th birthday on Monday, May 11 in the Convent of Mercy, Longford.

Here in Longford, where the Sisters of Mercy have been for almost one hundred and sixty years the last remnant finds itself in lockdown, cocooned as a result of the coronavirus. Consequently Sr De Chantal was unable to enjoy the presence of her dearly loved relatives, nursing colleagues and friends at the celebration.

She was born on May 11, 1920 in Kilmore, Carrick-on-Shannon, Co Roscommon and was christened Josephine Mary in St Brigid’s Church, Dangan.

She was the second youngest child of Thomas and Brigid Gilfillan and she had four brothers and four sisters.

Now at one hundred years of age she is the sole surviving member of her immediate family.

Josephine attended the Marist secondary school in Carrick-on-Shannon and then spent a year in the College of Home Economics, Ardagh. There she became acquainted with the Sisters of Mercy in Longford and in 1940 entered Longford Convent.

According to the custom of the time she was given the name Sr Mary De Chantal at her reception.

This was the beginning of eighty years answering her call as a Sister of Mercy.

Five years later she went to train as a nurse in the Mater Hospital, Dublin.

In 1950/51 she trained as a midwife in our Lady of Lourdes Hospital, Drogheda and did her work experience in the Coombe Hospital, Dublin.

Some years later she was asked to work in Our Lady’s Manor, Edgeworthstown where, with Sr Veronica Kiernan, she admitted the first maternity patient in February 1952.

Six and a half happy years later she was asked to leave the Manor to take care of the students’ health and domestic needs in St Mel’s College, Longford. Two other sisters were also assigned to this ministry.

1960 saw her back in St Joseph’s Hospital where she enjoyed her work with the, mainly, elderly patients and later in the adjacent Mount Carmel Hospital where she put her midwifery skills to good use. She retired from nursing in 1985.

The retirement was short lived and August of the same year saw her en route to Ely, Nevada – a small mining town in the Rocky Mountains where the Ardagh & Clonmacnois Mercy Sisters had a mission.

She worked there as a Parish Sister and returned to Longford Convent in 2001 where she has since resided except for the years 2012 – 2014 while the 1870s convent was being refurbished. During that time she lived in Ballymahon Convent.

Sr M De Chantal, now 100 years old, whose whole life was lived quietly and unobtrusively but very effectively is filled with gratitude and appreciation for the happiness and fulfilment she experienced in her life and work as a Sister of Mercy.

What was it that endeared her so much to her family, to the sisters with whom she lived, to her nursing colleagues, to the patients in the health care/nursing area and to so many others?

On reflection it was above all the quality of her presence. She had a peace-filled presence bringing calm everywhere she went.

Hers was a pleasant, encouraging, good humoured, healing presence that was greatly appreciated by her patients - a Christ-like presence bringing good news. To have journeyed with her even for a short while was a good experience. We are all on a journey. We are, all of us, a pilgrim people on the way to the Father whose unconditional love is revealed anew to us every day, especially through people like Sr De Chantal.

In hindsight hers was a life that began in the troubled times of the 1920s and continued in the 1930s and ‘40s through World War II. Throughout the peaceful years that followed she could never have imagined that she would celebrate her 100 birthday while another world war was being fought, this time with an invisible enemy, Covid-19.

The words of St John Henry Newman may resonate in some way with her now:

“So long Thy power hath blest me, sure it still will lead me on,
o’er moor and fen, o’er crag and torrent, till the night is gone
and with the morn those angel faces smile,
which I have loved long since, and lost awhile!” and “Keep thou my feet I do not ask to see the distant scene
One step enough for me.”

Who would ever have dreamt of “a distant scene” like 2020?