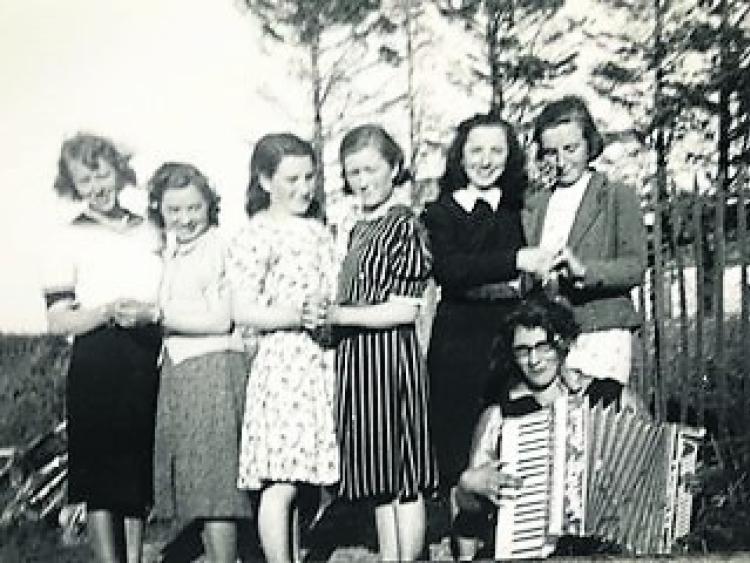 As a young lady, the late Mary Ellen Fletcher loved to play camogie and here she is pictured with Maureen Cox, Peggy Kerrigan and other friends from the area

The late Mary Ellen Fletcher (nee Cox) was blessed from the day she was born on a very special St Patrick’s Day morning, March 17, 1924.

Mary lived an amazing 95 years and died on May 6, 2019. Mary sometimes wondered why she wasn’t called Patricia after St Patrick and instead she was named after her mother, Mary Ellen Cox (nee Robinson). Mary would be known as little Mary Ellen. Her father was Peter Cox from Yard who built their two storey home in 1927.

Mary grew up in Cuilbeg, Rooskey, in the parish of Whitehall. Mary went to school in Slatta and walked to school every morning with her friend Peggy Kerrigan. She always admired the wild primroses and daffodils as she walked.

Mary also helped her mother run the small popular shop attached to the side of the house.

It was a ‘rambling’ house with a big open fire where friends and neighbours came calling to play music, cards and chat.
Mary was a raven haired beauty. As a teenager, Mary loved to play camogie with her friends in Casserly’s field, near Ballytoohey.

She enjoyed dancing and attended dances at the Tower Ballroom in Tarmonbarry.

Mary had three older brothers, Michael, Peter and John Paddy Cox. Peter went on to famously win a Renault 14 car on Spot the Ball in 1981. Michael went to Arva with his bride Maureen McGowan and they had two sons, Peadar and Tony. John Paddy had one of the only cars in the 40s and operated a taxi service.

Mary was given a new name at National School as there were two Marys, so she was Maureen for the rest of her school life. 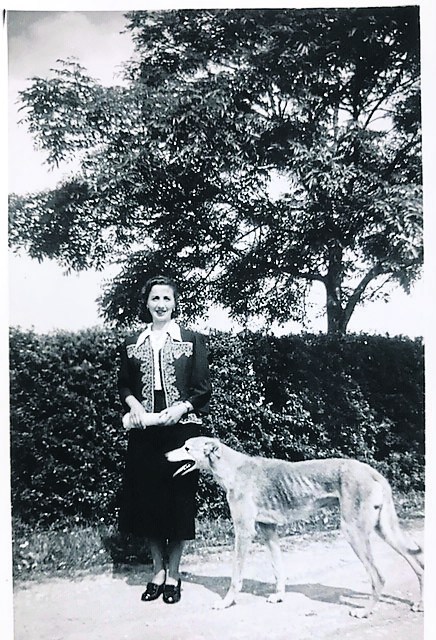 Above: The late Mary Ellen Fletcher pictured following her graduation from the technical college Longford circa 1940. Mary enjoyed taking part in the family pursuit of greyhound breeding and racing, producing one famous winner they called ‘Cuilbeg Prince’

She was a good student with beautiful handwriting and continued her education at the Technical School at Longford, cycling the twelve miles every day.

She graduated with flying colours and went to England where she started secretarial work. Before long, she met her husband Jack Fletcher, a tall handsome man from County Limerick. They got married in the Holy Ghost and St Stephen’s church in Shepherd’s Bush and set up home nearby. They had one daughter Helena. They lived happily going to the Irish club in Gayford Road to remind them of home.

Jack sadly died in 1991 and was buried in the family plot in Scramogue graveyard.

Mary was a devout Catholic and involved in the church, putting all her faith in her favourite saint, St Anthony.

Her devoted daughter Helena, an interior designer, was always on hand for support. Helena got married to Lee Davison in 2002 and they had a son Lucas. This made Mary’s life complete. She was a delighted Granny.

Mary lived a good and long life, always with great wit, humour and familiar Irish sayings. She was a great woman with amazing strength. She died peacefully at home on May 6, 2019.

After a requiem mass in her church, The Holy Ghost and St Stephen’s, her family brought her home to Cuilbeg to repose at her home.

The next day, a beautiful funeral service was held in St Anne’s Church in Slatta, next door to her childhood school.

Father Martin Mulvaney conducted a fitting and uplifting funeral mass for Mary. Lucas, her grandson, played her favourite tune, Danny Boy on the flute. Eimear and Andrew Reynolds sang beautifully throughout. The eulogy was read by her daughter Helena. Mary was laid to rest in Scramogue cemetery next to Jack and her family.

The reception afterwards was held in the Richmond Inn, Clondra. Coincidentally, Des McPartland had been their local landlord in the Orchard Pub in Askew Road, Shepherd’s Bush in the 1970s and knew Jack from there.

McPartland’s was Mary’s favourite pub in later years and she came ‘home’ often up until 2018.

We miss her life and spirit so much. She was a great woman with great strength.

A huge thank you to Father Martin Mulvaney, Tom Crosby funeral services, grave diggers, Tony and Rose Cox, Kathleen Coyle and Kathleen McHugh for their help. Eimear and Andrew Reynolds, Des McPartland and his staff and all who made the effort to attend the house and the funeral and those who sent mass cards.