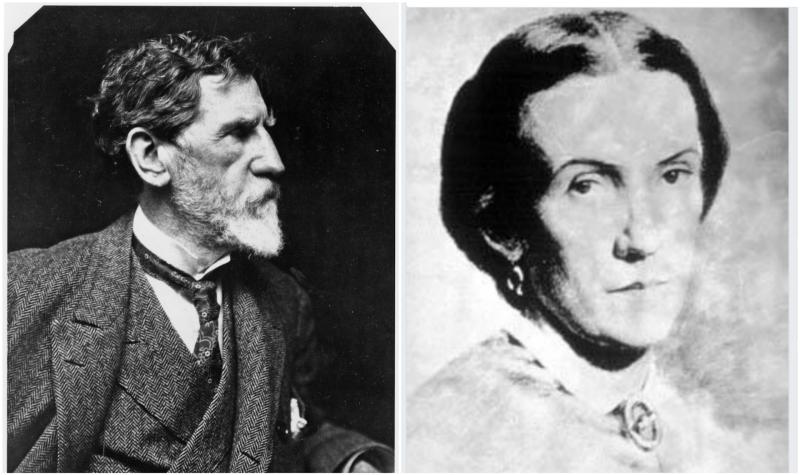 Generally acknowledged to be the foremost American sculptor of the late 19th century, Augustus Saint-Gaudens was actually born in Dublin.

He was born on March 1, 1848 to Bernard Saint-Gaudens, an itinerant cobbler from the south of France, and his Irish wife, Mary McGuinness, of Ballymahon, County Longford.

Bernard and Mary met in a shoe factory where they both worked, Arthur McGuinness, Mary’s father worked in a Dublin plaster mill.

In 1848, the family, with six-month-old Augustus, left Ireland for America, and settled in New York City.

The young Augustus grew up in the Bowery, attending Sunday school at Saint Patrick’s Cathedral on Mulberry Street.

The French-Irish boy survived numerous fights with the street gangs who targeted him and other Celtic immigrants.

His father opened a store and young Augustus sold his father’s Boots and Shoes, to the homes of New York’s prominent families. He had to work from the age of thirteen.

After a customer admired his drawings of the workmen in his father’s shop, he was allowed to follow his artistic bent and was apprenticed to a cameo-maker.

From polishing stones and running errands he graduated to carving cameos himself.

He also went to the free evening art classes at Cooper Union, returning home to draw far into the night. He moved on to study at the National Academy of Design.

His earliest work in sculpture was a bronze bust in 1867, of his father, Bernard P.E. Saint-Gaudens.

In 1868 he went to Paris and became a pupil of Jouffroy in the École des Beaux-Arts. Two years later, with his fellow-student Mercié, he went to Italy, where he spent three years. At Rome he executed his statues Hiawatha and Silence.

He then settled in New York, in 1874 he-made a bust of the statesman, William M. Evarts, and was commissioned to execute a large relief for St Thomas's Church, New York, which brought him into prominence.

In 1884 he completed the Robert Gould Shaw Memorial, in 1887 Abraham Lincoln: The Man, was unveiled.

Many other commissions followed including another sculpture of Lincoln, titled, Abraham Lincoln: The Head of State, the Double Eagle Twenty Dollar Gold Piece coin, American, 1848-1907, was also his work.

In all he completed over thirty major sculptures in his lifetime, including the Charles Stewart Parnell monument in Dublin.

According to Augustus his most treasured possession was a pencil sketch of his mother Mary McGuinness, from Ballymahon.

Augustus was diagnosed as having cancer in 1900, he became increasingly sick during the period covered by the Dublin commission. He never visited the site.

The finished Parnell sculpture did not arrive in Dublin until 1907, the year of his death, and the obelisk, which was erected under the supervision of George Patrick Sheridan, probably from the designs of Henry Bacon of New York, was not completed until 1911.