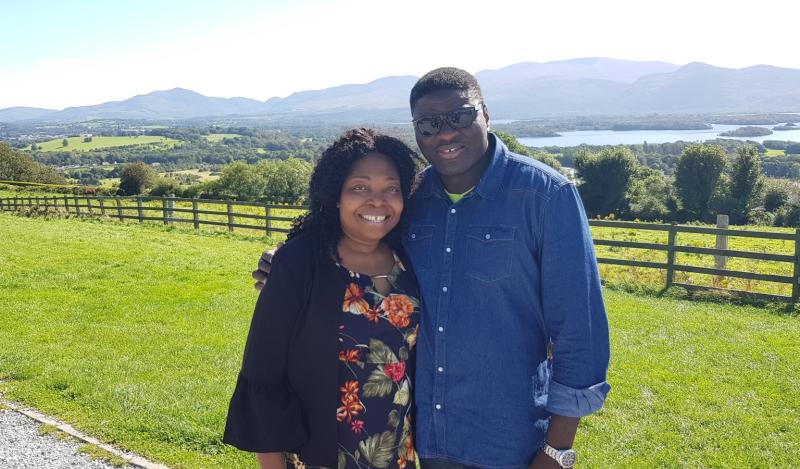 At the time of going to print on Tuesday afternoon, there were 91 cases of Covid-19 confirmed in Longford, as figures nationwide reached 15,652, with a total of 687 people sadly losing their lives to the virus.

But the government has indicated that social distancing measures, combined with the current lockdown restrictions have been proven to have an effect, with Chief Medical Officer Dr Tony Holohan announcing in recent days that the curve has been flattened - and with no peak.

There are still rising numbers of cases in the country, but it’s important to look for the positives by noting the recoveries too.

Edgeworthstown couple, John and Uchenna Opabola are two local people who were recently infected by the virus and are currently on the road to recovery.

Both were hospitalised and both survived the virus, with John suffering far more severe symptoms than his wife, Uchenna.

“I experienced a lot of symptoms. It all started with a dry cough and then fever with very high temperature, followed by aches and pains then vomiting and diarrhoea started,” John told the Longford Leader, adding that, after some time, he started to experience breathing difficulties and a “pepperish” feeling at the bridge of his nose.

“Because I was too weak and bent over, after seven days I noticed the breathing issue. My nose bridge breathing area felt as if I had spent a very long time swimming at the deep end of the pool,” he said.

“The vomiting and diarrhoea started around four or five days after my fever (aches and pain) started. However, it escalated so much that sometimes I vomited two to three times a day.”

It was in the early hours of Saturday morning, April 4, that John felt he needed urgent medical attention.

“Around 4am, my wife gave me lemon, ginger (pressed) and garlic (clove) in warm water. I drank the fluid and started chewing the garlic clove,” John explained.

“It triggered a shock in my system and my wife helped me to the toilet to vomit. This time, I vomited a red bloody substance.

“Since I know this is rare, I immediately told my wife to call the ambulance. I was so weak, tired with aches and pain. I could no longer stand without help.”

Read also: Right side up while inside out: taking care of our minds and bodies during Covid-19

Before his experience with Covid-19, John had never been admitted to hospital before, but the level of care he received over the course of his three days in Midlands Regional Hospital Mullingar was second to none.

While John was at the more severe end of the scale, Uchenna was lucky enough to escape the horrific symptoms her husband suffered.

“We didn’t know she was infected. She was only invited to St James’ Hospital for a check-up. However, they discovered that she was Covid-19 positive after they ran a test,” John explained.

Uchenna suffered a dry cough and high temperature but no fever, no vomiting, no pain or aches, no diarrhoea and no breathing issues.

Despite that, she was kept at St James’ Hospital for five days to be monitored.

“It was very painful because I had just returned home from the hospital on Monday, April 6, and my wife was admitted the next day,” said John.

“We were worried for each other. My wife was more worried about my welfare. Her main concern was my feeding, coupled with the fact that I had just returned home from the hospital. At this point, I was still vulnerable, looked weak, had lost weight and needed some monitoring.”

But, he added, both John and Uchenna received the best of care while they were in hospital. Nurses and doctors in both hospitals were empathetic and professional.

“The doctors made sure my wife was feeling better before leaving the hospital. They faxed her prescription to our pharmacy at Edgeworthstown and also called the pharmacy to explain how to take the medication,” said John.

“The nurses and doctors call regularly to find out about her health and breathing. They certainly went above par.”

Since returning home to Edgeworthstown, both John and Uchenna are recovering well and are staying isolated.

“We are both recovering. We still have some aches and pain on the joints, back and pelvis,” said John.

“I’m still coughing, though not as bad as before. I get tired easily if I go up and down the stairs. I’m short of breath if I talk for long. My wife experienced stomach cramps and pains on her pelvis too.

“Being isolated made it very difficult to do the normal things I would. At home, I couldn’t eat the food I like nor visit friends or neighbours. Exercising was impossible. Through it all, I think feeding has more effect on me.”

Fortunately, the couple has had a few guardian angels in the area, with their neighbours Mr and Mrs Tola Omotola providing three sumptuous meals per day to help with recovery.

John Tully from Tully’s Pharmacy in Edgeworthstown was even so kind as to drop Uchenna’s prescription to the house so that she wouldn’t have to leave.

John and Uchenna are through the worst of the virus, thankfully, and have only one message to impart to others:

“Please stay at home and keep social distancing. Think of the family you’ll destroy if you infect a family member and they die. Think of what could happen to you if you get infected.

“It’s only for a while and things will be alright again. Please save lives; stay at home.”

Read also: Age Action and the Irish Red Cross to offer Covid-19 Hardship Fund of up to €500 to the over 70s