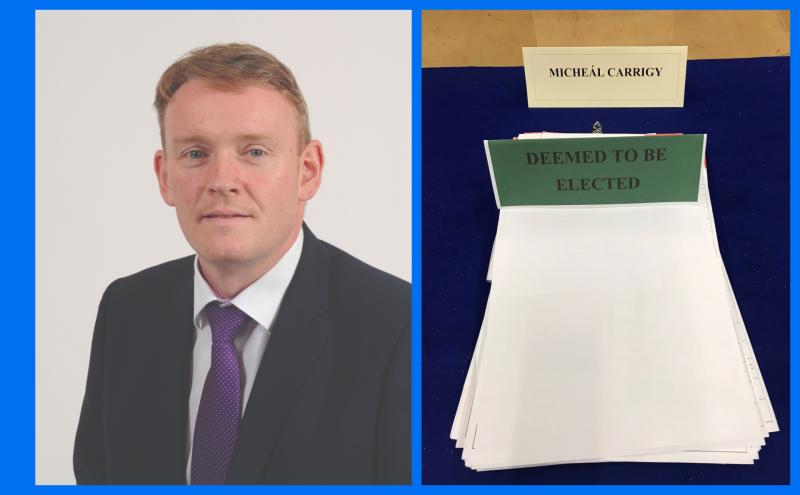 Longford County Council Cathaoirleach, Cllr Micheál Carrigy has been elected to the Seanad.

Senator Carrigy, who polled 6,334 first preference votes in his maiden general election bid last February and was eliminated on the ninth count, was one of 13 ‘inside candidates’ chosen by Fine Gael to run for the Upper House.

Following the 23rd Count, Senator Carrigy, on 116,000 votes, was the first of the nine candidates from the Industrial and Commercial Panel deemed elected. The second candidate elected was Barry Ward (114,000 votes). Senator Carrigy’s surplus will be distributed during Count 24.

On the transfer of the first parcel of O’Shea’s votes - the value credited to Carrigy is greater than the quota and therefore he is Deemed To Be Elected. #seeforyourself #Seanad2020 pic.twitter.com/ujRcGuDH9q

The twenty-third count has been completed for the Industrial & Commercial Panel. Carrigy and Ward, have reached a vote value greater than the quota and are deemed to be elected. Carrigy's surplus will now be distributed to the remaining candidates #seeforyourself #Seanad2020 pic.twitter.com/HnaalSlv8c

From 2016 to 2020, Longford had no representation from the county in the Houses of the Oireachtas, now it has two representatives in the shape of Fianna Fáil TD Joe Flaherty and Senator Carrigy, with Fianna Fáil’s Cllr Mick Cahill also hoping to join Carrigy in the Seanad.

Cllr Cahill was a candidate on the Administrative Panel and the counting of votes for  that panel are scheduled to begin at 11.30am tomorrow, Friday, April 3.

He is married to Una and they have 3 children, Braiden, Odhran and Davin. A Postmaster in Ballinalee he is deeply rooted in numerous organisations in the local community and county.

An exceptionally hard working and effective representative, he previously served as Longford GAA’s representative on Central Council in Croke Park, having prior to that held the roles of Youth Officer, Leinster Council Delegate and vice-chairman of the County Board.

He was a member of the Midlands Regional Authority from 2009 to 2014. He is currently on the Board of Management of Ard Scoil Phadraig in Granard and is also treasurer of the local Sean Connolly GAA Club.

Senator Carrigy was instrumental in securing funding for a monument for the late General Sean MacEoin in Ballinalee. He is also chairperson of the County Longford Tourism Committee, who working with Longford County Council completed upgrades to a 16km length of the Royal Canal towpath as a walking and cycling route.

As a result of his relentless work, a playground, funded through the Leader Programme, was opened in the village of Ballinalee and is a great amenity to have in the small picturesque village.