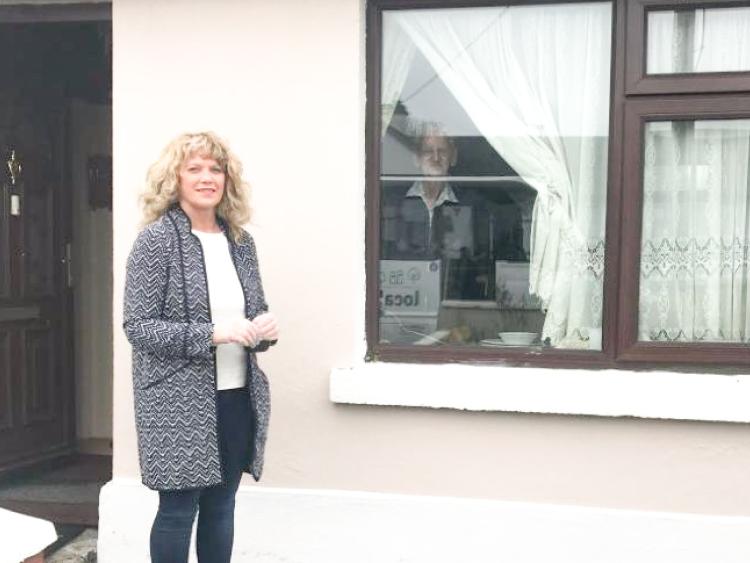 As the elderly members of our society adjust to life in isolation, it’s the kindness of the rest of us that they really rely on and, when Pat Lloyd was feeling sad about not being able to put flowers on his wife’s grave for her birthday, Breda Greaves and Local Link were quick to step up and help him out.

Breda, of Ballymahon Convent Day Care Centre has teamed up with Local Link to ensure the delivery of groceries and prescriptions to the more vulnerable members of the community and last week, she was more than happy to collect a bunch of flowers from florist, Mary Murtagh, and deliver them to the grave in Forgney.

“We were married 50 years. I spent 36 years in England. She was a widow with six children,” he said.

“When I moved in I said ‘I’m going to lay down a few rules and regulations - no arguments and no rows’. There was somebody knocking on the door looking for money to fix the washing machine so I said ‘tell him to come and pick it up and I’ll buy you one’.

“We were married 50 years and we never had one argument. Because life is too short.”

The late Ellen was 11 years and five months older than her husband, who will be turning 85 this August.

“But age doesn’t really matter. I loved every bone in her body. It’s very difficult to be here on my own without her,” said Pat.

Pat lives on Leo Casey Terrace where his family has lived for decades and he was proud to tell the Longford Leader that he is one of eleven siblings and has seven sisters and three brothers.

“The eldest is 89 and the youngest is 69 - and all of us still living, can you believe that?” he chuckled.

Pat has been staying inside for most of his isolation. He takes a walk around his garden every day and keeps the house spick and span.

Pat has been self-isolating for a number of weeks in an effort to stay safe from the coronavirus, but happily told the Leader that his neighbours have been so helpful to him, as have Barney Steele, Breda Greaves and Local Link.

“It’s about time the younger generations copped themselves on, though. They think they’re immune to it but they’re not immune. They could be carriers,” he said.

“I heard about the big party in Longford with all the young people and I thought that was absolutely disgusting.”