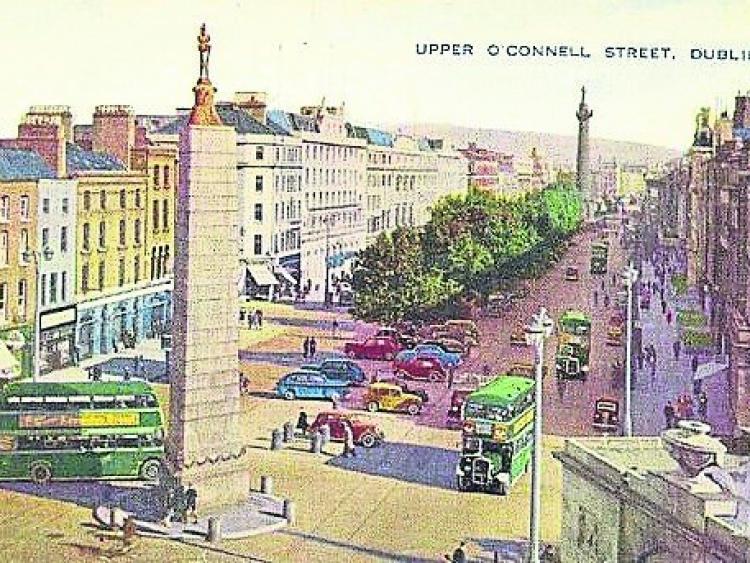 A very long time back, circa 60 plus years ago, I visited Dublin city for the first time. It was a magical experience.

Vast streets, capable of accommodating all the traffic easily, with the cars ambling along, in stately fashion, alongside many horses and what looked like trailers, to my young mind, but of course they were merely four wheeled carts, that carried coal, turf and other firewood to keep the city warm.

A new world it was. Creating a sense of bewildering wonderment.

O’Connell Street was overlooked by Nelson’s Pillar, standing tall and with Nelson erected on top, seeming to look down towards the other end of the promenade it made for a certain gravitas and steadfast critique of what was going on - in my mind at the time.

Frank Airlie was the driver for my father and I. We were visiting a hospital, which I wasn’t allowed into, only Daddy ventured therein.

Much later, I came to realise that at that time, my mother had given birth to another member of the household, and when she arrived home, with the newest bundle in her arms, all smiles, as my father fussed around the place as though his life depended on it.

My memories of Dublin at that time remain to this day.

The older the memory, the more it is embedded in the mind.

Mathematics dictate that this is so.

After all, at age ten, every year is 10% of your whole life. Whereas at seventy every year has become 70%. Much more to cram into the greatest computer ever in existence when you become seventy.

The short term memory is beginning to resist retention, and is ready to cast aside what isn’t important in order to keep what seems more relevant, and current.

The human memory cannot be added to, like a man made computer, where adding memory is very easy.

No, the human memory is a very well tuned machine still far beyond the reaches of scientists, but in fairness they have become very capable of inventing new ways to replicate the human brain.

In those days, Dublin had a certain style about it; it certainly had for me at least.

Later I realised that in those times the policy was that anyone could build - within reason - anywhere they wanted. Of course that sometimes wasn’t the best choice, but seemed only proper to allow.

If a person comes from an area, there is no satisfactory reason - except money - why they cannot build on their own land, or if a person acquires a plot from a neighbour.

It is the natural way of things, reflective of humanity in general.

But something has happened since then.

Back then, departments didn’t charge exorbitant fees to each householder to ‘service’ the house. Funny how the householder still pays through the nose for such services as water, heating, etc., to this day.

Today we can see the change all around us, as county councils refuse permission for anything that makes sense for some rural householder, or for some that can acquire a plot here or there.

Nowadays the planning is in the hands of the planners. Isn’t that amazing?

The land that Irish people already own, has become a plaything to profit those in the know. It’s a whole new way of thinking.

Some humans were never designed to live in clusters

The result of the gradual alteration in planning laws, has destroyed Dublin, a once proud city.

The ‘planners’ have lost the plot.

Successive Governments have insisted on herding people all over Ireland into clusters.

Some humans were never designed to live in clusters.

Nobody has any right to force them to live in towns and cities where they are inevitably unhappy, and sad.

Longing and flocking to the open spaces that they loved so dearly.

Look no further than Longford County Council, where getting planning has become a difficult journey through the brambles and the bushes with no guarantee that the applicant will achieve anything.

All sorts of conditions are laid down, all costing money, and when the building is finally underway, it appears that the council just collect their fees and forget about that case. Of course they don’t actually do that, but when too much time and ‘negotiation’ has absorbed the reserves of the applicant, nothing is examined too closely, the householder is exhausted and relieved to get planning.

Why do councils all over the country insist that rural dwellers move into town?

It’s a wrong decision, and a wrong policy, everything related to human nature is being cast aside in the interest of supposed economics. Some humans love to live in the country. Some love to live in the town. Why aren’t people allowed to live wherever they want to, within reason?

The cost of all this planning palaver has destroyed this country.

Almost every cluster has issues with criminality and rampant drug distribution. All an offshoot of the planning laws.