The presence of the gardaí is more noticeable than ever this week as members of An Garda Síochána patrol the streets ensuring members of the public observe social distancing.

And ready to keep them fed and caffeinated as they put themselves at risk is the Gallery Café, which is offering free coffee and toasties to all staff working on the front line.

The Gallery is also doing a call and collect service or drive-thru, Tuesday to Saturday, in an effort to keep business going during this difficult time.

Read also: Public asked to walk in a clockwise direction at the Mall and other Longford walkways

Garda cars and vans can be seen around the town, gardaí are visible at the Mall and other public places, and members can also be seen on the streets dispersing groups of more than four people.

Despite restrictions imposed by the government, and advice given by the Department of Health, there are still people gathering in large groups, as can be seen from the photograph below.

The photo, which was sent to this newspaper by a local reader, shows a large group of people who had been loitering at the Courtyard, being dispersed by two local gardaí who were on patrol at the time. 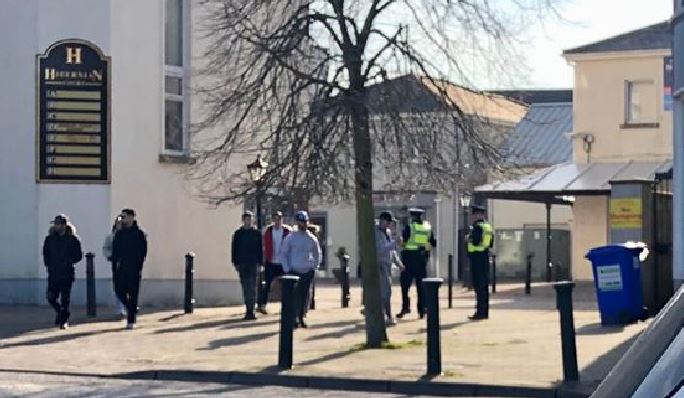