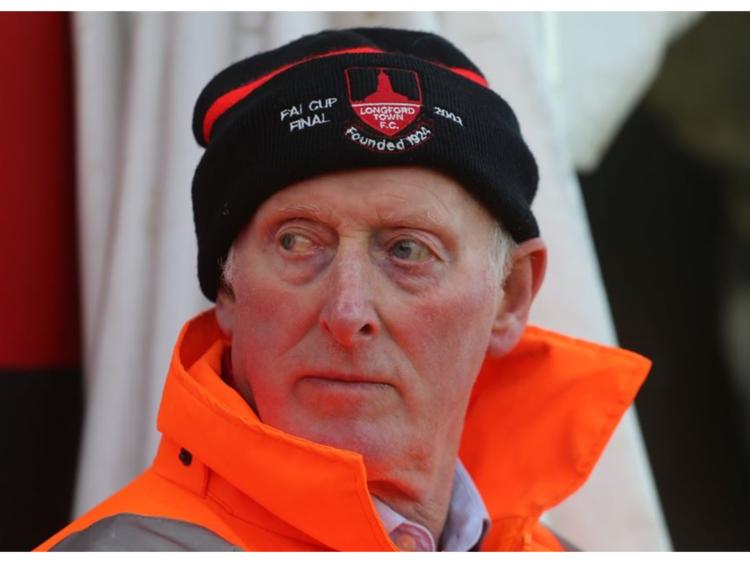 Many tributes have been paid this evening to the late Michael Ghee, who has been hailed as a Longford Town Football Club legend and one of the club’s all time great stalwarts.

The late Mick Ghee of Lisduff, Longford town, passed to his eternal reward, peacefully, today Friday, March 6, at his residence surrounded by his family.

In a tribute, posted on their Facebook page, Longford Town FC Supporters Club described Mick as ‘a pillar of the club for more years than he'd care to remember’.

The tribute continued, “When we talk of unsung heroes, Mick Ghee was a prime example. He truly walked the walk when many of us simply talked.

“He was always early for matches to facilitate the crowds park properly and efficiently and always with a warm welcome, kind words and a big smile. Later when we were already heading for home, he was on the pitch making sure the ref was safely escorted to the dressing room.

“His commitment to and pride in Longford Town FC knew no bounds. On bank holiday Mondays, he could always be counted on to help with the clean up. Despite being the least popular job and despite having plenty of other commitments, he seldom missed the clean up - and always with a smile and a positive attitude.

“Players, fans, supporters come and go but Mick Ghee was ever present. He'll be fondly remembered for as many seasons as de Town wear the red and black.

“We wish to extend our deepest sympathy to his heartbroken family and many, many friends. May he rest in peace.”

As a mark of respect to the late Mick Ghee, a minutes’ silence will be observed prior to the kick off of Saturday’s SSE Airtricity League First Division round three tie between Longford Town and Bray Wanderers at Bishopsgate.

Longford Town FC posted on their Facebook page that Mick, father of Tony and Robbie, will be sorely missed by everybody at the club.

“Mick has been a stalwart of the club for many years and was renowned for being an absolute gentleman who put in tremendous hard work for the club. Our condolences to Mick’s family and friends. May he rest in peace.”

A brave and strong man, Mick enjoyed working in the bog and spending time in his garden.

Donal Keogh, on Facebook, said the late Mick Ghee was a legend. “The club (Longford Town FC) has lost one of the all time greats.” Avid Town supporter Caomhaoin Ó Cairbre remembered Mick as, ‘a gentleman and a great clubman’.

Liam Healion also fondly remembered his former work colleague. “I worked with Mickey for almost 30 years at Wessel Cable. I also had the great pleasure of being involved with him for LTFC, a pure gentleman. RIP.”

Removal on Monday, March 9 to arrive at St Mel’s Cathedral for Mass of the Resurrection at 11am followed by cremation at Lakelands Crematorium, Cavan at 2pm.

Also read: Longford Town bid for another win at home to Bray Wanderers