First sitting of the 33rd Dáil: Local TDs take in the excitement of first day at Leinster House 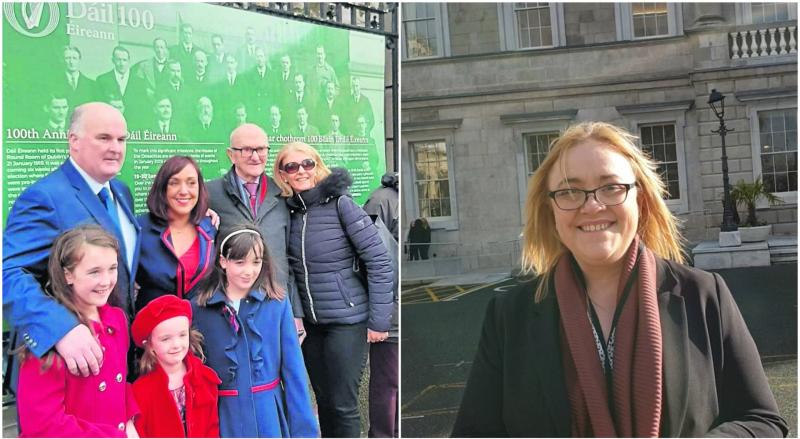 There was a real ‘first day at school’ feel at Leinster House last Thursday morning as TDs new and experienced milled about on the plinth ahead of the first sitting of the 33rd Dáil.

Crowds of people gathered outside the gates, peering in to see who they could spot in the crowd. Healy Raes played accordians and sang songs about ‘The Kingdom’, roaring “we’re back again!” amid cheers from their gathered supporters.

Protests on the perimeter saw people with megaphones and posters shout the same message: It’s time for change.

Meanwhile, members of the media were picking up on all the action as they nabbed a party leader here or a new TD there for interview, capturing all of the emotions of the day.

Passes were scarce for those who wanted to get past the iron gates and even the media had limitations.

“Your pass gets you to the plynth only,” this reporter was told when attempting to sneak inside the building.

But at least the plinth was inside the gates. Crowds of people peered in through the bars, waiting for one of their number who had a pass to come back - hopefully with a few more to get people in.

Families and close friends of the elected TDs were dressed up and ready to support their man or woman as they marched through the gates of Leinster House.

“On a personal level, it’s a very proud day for me,” said Longford TD Joe Flaherty who managed to steal a few moments away from the crowds to talk to his local newspaper.

“The people of Longford invested their faith and hope and dreams and aspirations in me, so today is a personal celebration but I’m deeply conscious of the sense of faith that the people have invested in me.

“Really, after today, it’s about pushing on. It’s about rectifying a lot of the wrongs and a lot of the ills that afflict us in the county at the moment.

“I think it’s incumbent on all parties to get on with the serious business of trying to form a government.

“My primary goal is to get the very best for Longford. I’m very partisan about this role that I have, it’s very much Longford, Longford, Longford, but at the same time, I am conscious of the national interest and we need to get a government formed as quickly as possible.”

He wasn’t the only brand new TD for the Longford/Westmeath constituency, though, and poll-topper Sorca Clarke of Sinn Féin was equally eager to brush aside the excitement of her election and get stuck into her new role.

“And those 11,000 plus people who put a number one beside my name… I haven’t forgotten about that and I’m not likely to forget about it.

“They come with me every time I walk through these doors. That’s the reality of being a politician. You’re here to represent the people who put you into the job and that’s what I intend to do.”

In fact, Deputy Clarke added, she’s already been working behind the scenes to get things done for her constituency.

“I’ve been in contact with a few departments over issues that have been raised with me so far. That’s going to continue,” she said.

“I want to be a TD that’s on the ground as much as possible. Obviously, we’re here on Tuesday, Wednesday and Thursday but Monday, Friday and Saturday, I’ll be on the ground.

The other two local TDs, Robert Troy and Peter Burke, weren't close to the action at the plinth when this reporter went looking, but they’re old hats at this game and had probably already taken their seats inside.

And, with Fianna Fáil’s Seán Ó’Fearghaíl being re-elected as Ceann Comhairle, the next big step for the newly-elected TDs is to form a government.