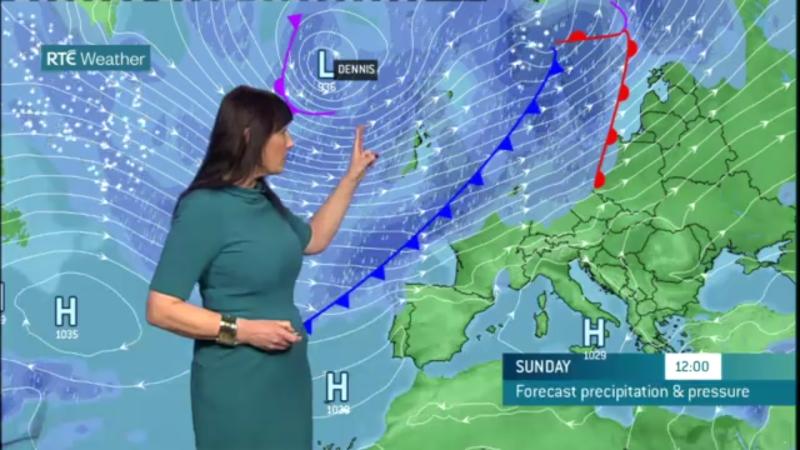 Met Eireann expects Storm Dennis to last right through the weekend and into Monday with the worst expected on Sunday.

Met Eireann meteorologist Jean Byrne delivered the latest on the eve of the storm after the RTE news on Friday night.

"Extremely unsettled over the weekend as  Storm Dennis tracks to the north and northwest of Ireland," she said

She said Status Yellow warnings are in operation for Saturday for very strong and squally southerly winds and heavy and thundery rain.

Further warnings are likely as the weekend goes on.

"We will be issuing warnings also for Sunday. If anything it looks like it would be even windier with a risk of stormy conditions particularly across parts of Connacht and parts of Ulster as well," she said.

However, Sunday is expected to be brighter with sunny spells especially in the east but there will also be squally showers of rain and hail.

The forecaster said the first affects of the storm will be felt on Friday into Saturday with wet and windy conditions coming into the west and southwest during the night turning heavier by morning in the west.

"That wet and windy will spread rapidly across the country in the morning with the heavy pulses and the risk of thunder a risk of flooding as well southerly gales or strong gales and sea areas," she said.

Ms Byrne went into more detail about what to watch out for on Sunday.

"Storm Dennis come of bit closer and as a does the winds will strengthen even further with a risk of stormy conditions through the north and west especially but on extremely windy everywhere through Sunday and Sunday night," she said.

The impact will linger into next week.

"It will still be windy through Monday and Tuesday the wings will be not quite as strong as over the weekend but it will be colder and some of the showers will turn wintry," she said.

Read Below the Met Eireann forecast issued at 6pm on Friday.

Saturday will be wet and windy with persistent and at times heavy or thundery rain leading to flooding in places. Very windy also with strong and very gusty south to southwest winds, with gales on coasts. Later in the afternoon, the rain will clear to showers and winds will become southwesterly and ease somewhat. Highest temperatures of 9 to 11 degrees.

Very disturbed weather through the rest of the weekend, with storm Dennis continuing to affect us. The storm centre will be well to the northwest on Saturday night but coming closest to us later on Sunday.

Saturday night: Further spells of heavy rain overnight with some thundery downpours likely and further flooding. Winds easing for a time inland, but gales will continue in coastal counties.

Sunday: Extremely windy and very showery on Sunday with stormy conditions in Atlantic coastal counties, especially northwestern counties, with very severe and squally winds. Widespread heavy rain and hail showers with thundery downpours at times, but drier and brighter at times in parts of the east and south.
Cold with afternoon temperatures of 4 to 8 degrees Celsius with a very significant wind chill factor. Showers and extremely windy conditions for a time on Sunday night.

Early days of next week: The severe winds will ease by Monday morning, but both Monday and Tuesday will still be windy and cold days with sunny spells and heavy blustery showers, especially in southwestern, western and northern counties. Some of the showers turning to snow at times, especially on higher ground. Drier in the south and east. Afternoon temperatures of 4 to 7 degrees Celsius with some frosts by night.