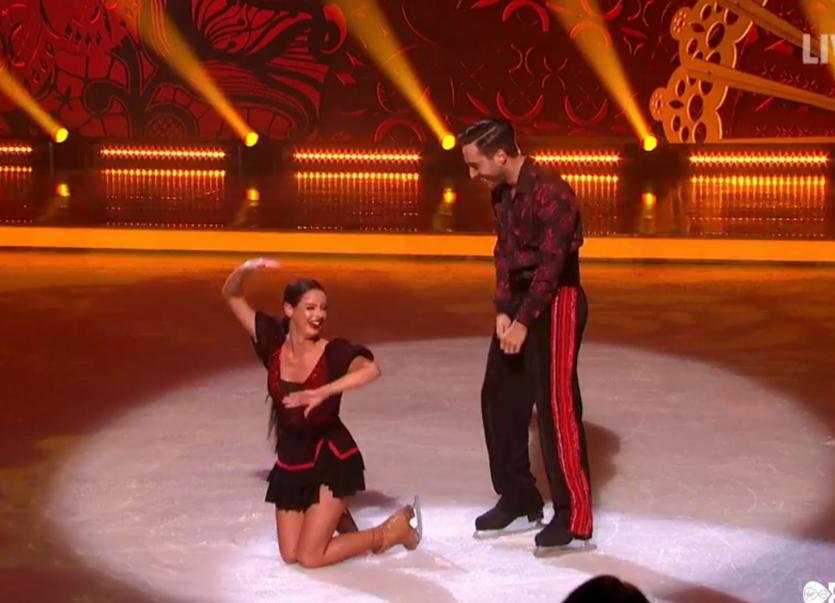 Maura and her partner Alexandar looking relieved after a successful headbang

In her initial Q&A ahead of Dancing On Ice, Maura Higgins admitted that the thing that scared her most about taking part in the competition was the headbanger.

Last week, on her own Instagram account, Maura posted a video of herself and said that rehearsals were so dangerous that she was being made to wear a helmet.

On Sunday night, Maura and her partner Alexandar Demetriou danced their most daring routine yet - a flamenco dance, which included the very move that scared Maura so much in the beginning - the headbanger.

“This is the first headbanger of the series - bye-bye, Maura,” she laughed in her video interview.

Medics were on standby for her first try in training and, while the helmet did hit the ice, it didn't put the daring Ballymahon woman off.

Skating to Don’t Let Me Be Misunderstood, Maura took a leap of faith and aced the death-defying move.

There were plenty of boos in the audience with the score, though. Three judges gave her 7.5 and one gave her 8, with a total of 30.5 being her highest score to date.

But with such a huge effort put in to such a dangerous move, surely she deserved a higher score than that?

Tune in to Dancing On Ice next Sunday at 6pm on Virgin Media One to see what daring moves she attempts next.