Appropriation exhibition to be launched at Longford's Backstage Theatre 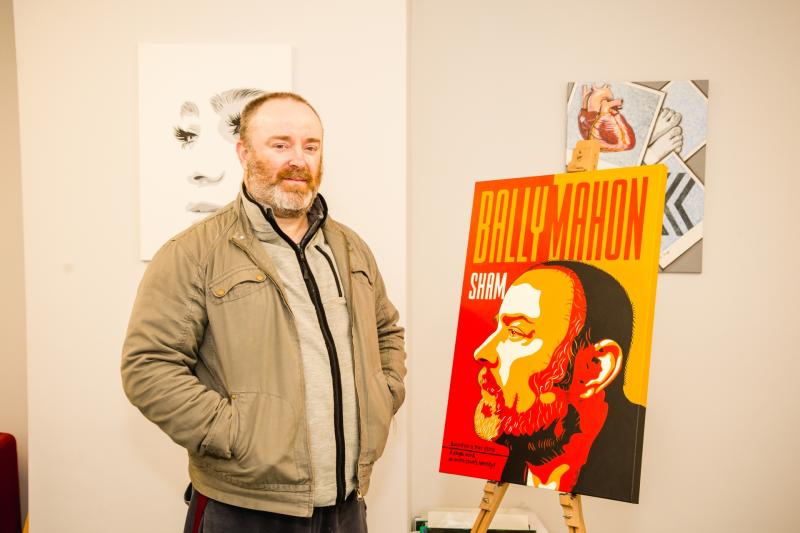 A year on from the opening of Garveys Yard Art Studios in Longford town centre, Engage, the artists-led group behind the venture have partnered with Backstage Theatre and Co Longford Arts Office in bringing the first exhibition by a studio artist to the public.

Pat Taaffe, a Longford based artist since 1998 and originally from Ballymahon , has been based at Garveys Yard Studios for the past few months, creating his striking new exhibition, Appropriation, which opens in the Atrium Gallery at Backstage Theatre on Wednesday, February 5, at 8pm.

The title of the exhibition is Appropriation, which, according to Pat is “based on the fact that most of what we apply our lives to reflects on a system that exists already; we borrow information, regurgitate, remix... appropriate!”

An apt title perhaps, as the studios were developed in former derelict buildings in the spirit of re-use, re-imagine, re-generation to address the lack of arts infrastructure in Longford , provide affordable workspaces for artists and create synergies within the local arts community,

“Several artists have benefited from the studios since last February and an open studio event last summer provided a chance for people to visit the studios and artists to show their work,” said Gary Robinson of Engage.

“Pat was one of those artists and that showcase led to an offer of this solo exhibition.”

Pat’s artwork originated from a keen interest in the natural world and was self taught from early childhood.

A degree in Design (Communication) at AIT brought a design perspective into the work, with a greater knowledge of colour, typography and digital media, all of which have a prominent impact.

Most of the recent work displays a pop, post-modern influence with a poster-based aesthetic, as a respectful tribute to designer/artists Peter Saville and Shepard Fairey.

The design concept de-constructs movie soundtracks, scores and music, with a more organic painted to canvas rendering, rather than print.