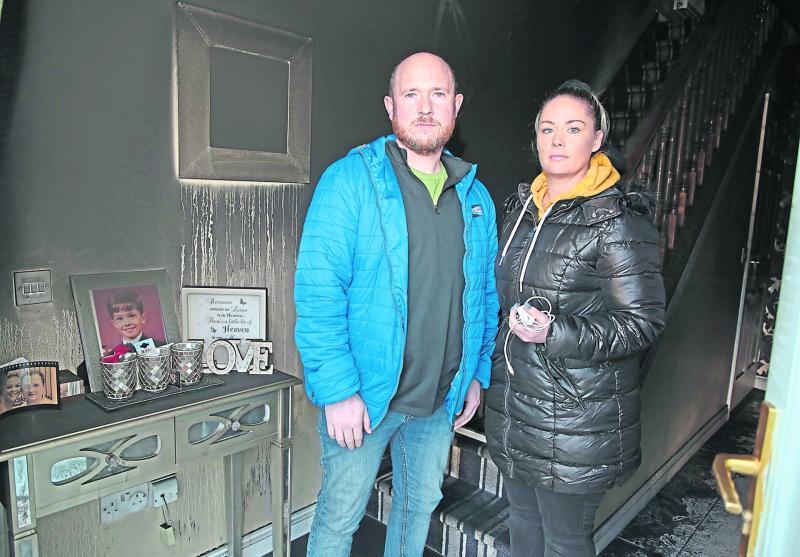 It was a tough start to the new year for one Longford family, after a recent tragedy resulted in significant damage to their family home.

Charlotte McGrath and her husband Richie, both in their 30’s, first moved to the Ballinalee area approximately eleven years ago, where they moved into their current family home. It is here they live with their 18-month-old daughter Frankie, though their life was turned upside down in the first week of January.

Charlotte told the Leader: “On Monday, January 06, we went about our normal routine. Richie was going to work and I was going to my parents house for a few hours.

“We had only left about an hour when we received a phone call from one of the neighbours to tell us our home was on fire.

“At this stage we didn't know how bad things were.”

Upon making their frantic return home, the couple were informed of the events by members of the local fire brigade. Although the fire was extinguished, it caused a significant amount of damage to the property.

The reason behind the fire was a phone charger which was left plugged into an extension lead in their absence.

Charlotte said: “Thankfully, the neighbours had the fire brigade called and they were on route.

Read also: ‘All they want to do is stick him into an old people’s home’, says worried Longford mother

“When Richie arrived at the house, he was greeted by the firemen who told him the fire was put out and what had happened.

“The fire had started from a phone charger which was left plugged into an extension lead in the sitting room.

“The sitting room is completely destroyed from the fire. The front window blew out from the heat. The rest of the house is covered in thick black soot and smoke damaged.”

The young family spoke of their devastation at not only the damage to their house, but also the loss of their treasured possessions.

Charlotte said: “We are devastated that this has happened to us, as this has been our home that we have loved and put a lot of work into through the years.

“We have lost all our worldly possessions that we have gathered over the past 11 years, such as photographs and more.”

In light of the McGrath family’s unfortunate start to 2020, the local community have rallied behind them in support, which in turn has led to the foundation of a gofundme page in their honour, with a €10,000 target. You can donate here.

The young mother stated: “We are completely overwhelmed by the support and generosity from families, friends the community and complete strangers who have gone above and beyond to help us in any way possible.

“We would like to personally thank the Edgeworthstown fire brigade for their quick response to the call, Granard gardaí, and also to our neighbours who contacted us both to offer us any help we may need. We are very grateful to you all.” she added.

“We would also like to thank a good friend of ours, Pauric Flaherty, who has set up a go fund me page to try and help us to get our home back. Every donation is very much appreciated.”

In conclusion, the Longford mother issued a warning to other families to be careful when leaving chargers plugged in.

She said: “Never did we think that a phone charger could be the cause for us to lose our home. You read and see stories of it happening to other people but you never think it would happen to you.

“I think every household is guilty of leaving chargers or other household appliances left plugged in while they go to work or school for the day.

“I just hope this story will make more people aware of the dangers of phone chargers or anything electrical being left plugged in,” she concluded.