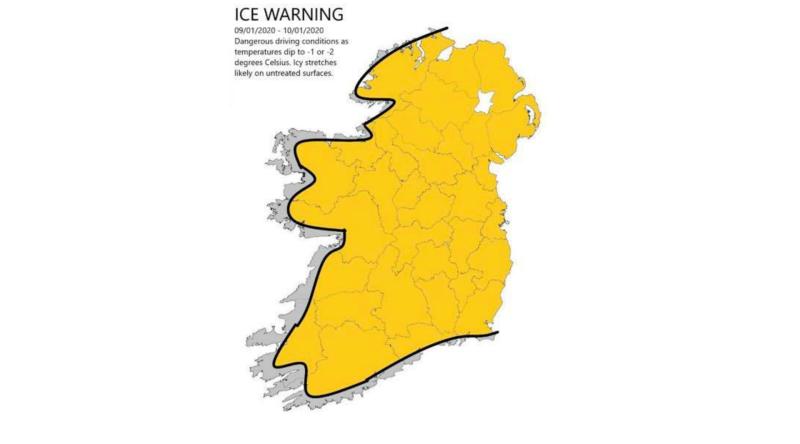 Temperatures are about to get even colder tonight, according to Ireland's Weather Channel's Cathal Nolan.

"After what was a bitterly cold day in many parts of the country temperatures will fall away further this evening and early tonight with a widespread sharp to severe ground frost developing in many areas," he said.

"Due to the combination of lights winds there is also the risk of some patches of fog developing in sheltered parts of the Midlands, South and East of the country causing an added risk to motorists on our roads late this evening and overnight.

"Do take care of you are travelling overnight or through the early hours of tomorrow."

TOMORROW - FRIDAY 10TH JANUARY
A cold and frosty start on Friday with some icy stretches. Dry with spells of sunshine for the first half of the day but cloud will steadily thicken from the west and rain will move in to affect western and northwestern counties during the afternoon. The rain will extend eastwards during the evening. Highest afternoon temperatures of 5 to 8 degrees but turning milder in the evening in freshening southerly breezes.

NATIONAL OUTLOOK
Outlook: Remaining quite unsettled over the weekend and early next week.

Saturday: Parts of the east will start off dry on Saturday but heavy and persistent rain will spread countrywide through the morning, eventually clearing to showers later in the afternoon. Fresh south to southwest winds will veer westerly with the clearance of the showers. Highs of 11 to 13 degrees.

Saturday Night: A mix of scattered showers and clear spells on Saturday night. Lows of 2 to 5 degrees with some frost patches and light to moderate southwest winds.

Sunday: Drier and brighter on Sunday with good spells of sunshine and scattered showers. It will be a cold day with afternoon highs of just 5 to 7 degrees in light westerly breezes.

Sunday night: Dry for most of the country on Sunday night although patchy outbreaks of rain will push into Atlantic fringes overnight. Cloud will keep temperatures up at 4 or 5 degrees in the west but cooler in the east with lows of 1 to 3 degrees, with patchy frost likely. Southerly winds will be mostly moderate, but fresher along Atlantic coasts.

Monday: Current indications are for a very wet and windy day on Monday with strong and gusty south to southeast winds and gales expected along all coasts. The rain will be heavy and persistent at times with localised flooding possible.