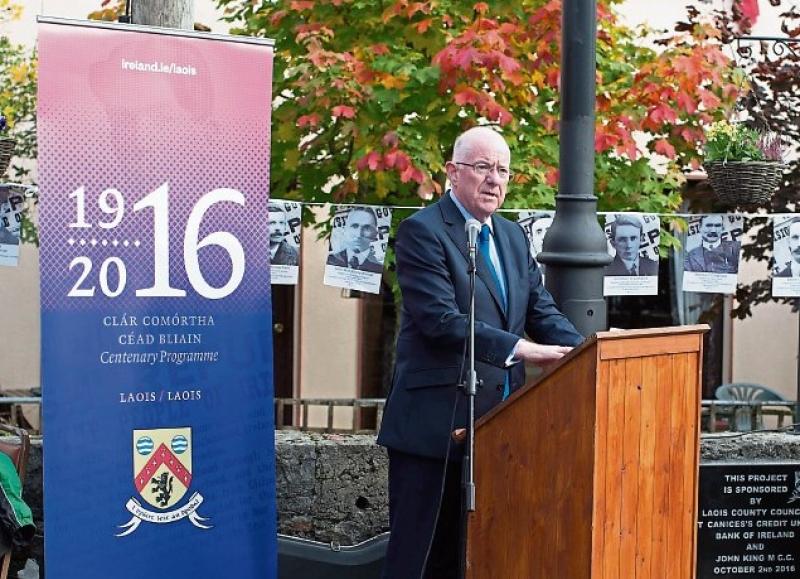 Minister for Justice Charlie Flanagan has announced the deferral of a commemoration of the Royal Irish Constabulary and Dublin Metropolitan police but he says the move will cause 'deep hurt' to many people.

Despite being backed by Taoiseach, Leo Varadkar, the Minister has bowed to pressure in announcing the event planned for Dublin Castle cannot take place in the 'atmosphere' which now exists.

Also read: 'In no other state would they celebrate the deeds of the oppressors', says Sinn Féin's Matt Carthy

Many politicians have said they would boycott the link because of the RIC's links with the Black and Tans. However, the Fine Gael Minister has described the response as 'disappointing' and he stood by the plan to hold an event at some stage.

"As a Government, we have at all times sought to have a national programme of commemorations that is authentic, sensitive and inclusive.

"We very much support the recommendation that there should be specific State-led initiatives to commemorate the Royal Irish Constabulary (RIC) and the Dublin Metropolitan Police (DMP).

"However, given the disappointing response of some to the planned event on 17th January, I do not believe that the event, as planned, can now take place in an atmosphere that meets the goals and guiding principles of the overall commemorative programme.  Therefore, I am announcing its deferral.

"I know that, regrettably, this decision will be a cause of hurt and upset to many people. I commit to proceeding with an alternative commemoration in the months ahead.  As a next step, I will consult further with the expert Advisory Group on Centenary Commemoration, with the all-party consultative group on commemoration and with other stakeholders, with a view to organising an event that is inclusive and fully respectful of all the traditions and memories on this island.

"As a Minister in two Departments over the last number of years, I have always been acutely conscious that commemorating the major events that shaped our nation one hundred years ago would in many cases be hugely challenging and hugely sensitive.

"Our island’s history is complex.  The events that led to the creation of an independent State had devastating consequences for many families and many communities.  We continue to live under the shadow of these events today.

"It has always been clear that the later period of the commemorative programme, including the War of Independence, the Anglo-Irish Treaty, partition and the foundation of Northern Ireland and the Civil War, would be particularly challenging".

Also read: 'It would be wrong': Minister Kevin 'Boxer' Moran announces he will not attend RIC commemoration

Minister Flanagan insisted that he is committed to acknowledging the role of the police forces which operated prior to independence from Britain.

"Thousands of Irish people have ancestors who served in the Dublin Metropolitan Police and Royal Irish Constabulary.  These personal histories are part of the history of our island.  I believe it is right that we acknowledge that history.

"There were those in the RIC who committed atrocities.  The horrific record of the Black and Tans and Auxiliaries is well known.  But there were thousands of other officers who behaved with dignity and honour in serving their communities.  And we should not seek to airbrush these people from our history.

"In general, I would like to emphasise that the Government’s approach to commemoration has always been to deepen mutual understanding without expecting anyone to abandon loyalties.  Alongside major commemorations for the 1916 Rising, we have marked the centenaries of the Ulster Covenant, the Home Rule Bill, the Dublin Lock-out, the First World War (including the Battle of the Somme) and the First Dáil.

"We have hosted a State event to acknowledge the British soldiers killed in the Rising.  The goal, above all, has been reconciliation.  We were all moved when Queen Elizabeth bowed and laid a wreath at the Garden of Remembrance, acknowledging those who died fighting for Irish freedom.

"In that context, and in that spirit, the Government accepted the specific recommendation that “consideration should [be] given to the organisation of specific initiatives to commemorate the Royal Irish Constabulary (RIC) and the Dublin Metropolitan Police (DMP) and to acknowledge their place in history,” he said.

Minister Flanagan said the Government has been guided by the principles set out by the Expert Advisory Group on Commemorations.