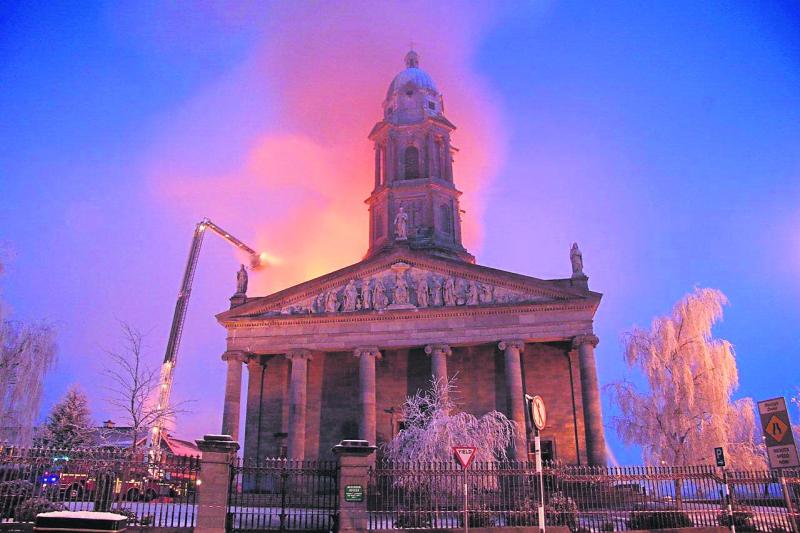 A decade ago Colm O’Reilly was Bishop of Ardagh and Clonmacnois and, on Christmas morning 2009, he received a 5am telephone call, informing him St Mel’s Cathedral was engulfed by fire.

Bishop Emeritus O’Reilly says that while nobody was dead nor was anybody injured he felt as if he was witnessing a struggle for the life of a dear friend, ‘our Cathedral’. In this article he recalls the intense shock and consternation in the aftermath of the fire.

The telephone by my bedside rang at 5am. A phone call received in the early hours of the morning was rare in my time as Bishop of Ardagh and Clonmacnois.

A phone call coming early on Christmas morning sounded especially alarming and immediately registered in my head as bad news.

Somebody is dead, I thought, before I picked up the phone. It was Father Tom Healy who was the caller.

“I am sorry to give you bad news,” he said. “There is a fire in the cathedral,” he added. This was indeed bad; so bad that I cannot recall what I said immediately in reply.

I can remember saying, as I got to my feet, that I would be at the cathedral as soon as I could.
Nobody was dead nor was anybody injured in any way in that night of a catastrophic fire. However, I can say that I soon felt as if I was witnessing a struggle for the life of a dear friend, our Cathedral.

I was so transfixed that I scarcely noticed that the night was bitterly cold with below zero temperatures.

What I remember most clearly still is the sound of windows exploding in the intensity of the heat and shattered glass crashing down.

The smells, caused by burning substances were suffocating in a way that I find unforgettable to this day.

When I was informed that the Fire Officer in charge wanted to talk to me, I immediately knew the fire was out of control. He said he was about to call all his fire-fighters out of the cathedral because their continued efforts put their lives in danger. Naturally, I expressed full agreement with his decision.

However, I must admit that knowing that the battle for the cathedral was lost set off in me a feeling of intense loneliness.

Even then I never doubted that the fire, however it originated, was accidental. I was also consoled by hearing that the sacristan was accompanied by one of the priests as they secured all the doors and made sure that nobody remained in the building after the Midnight Mass.

When people began to arrive for the early masses after day had dawned, there was shock and consternation of an intensity that I have never before witnessed around the cathedral.

The priests and I were the recipients of condolences as the ones most directly affected by what had happened.

I know I can speak for them as well as myself when I say that the sympathy of the people for us at that time is not forgotten.

Father Tom Healy was keeping me briefed on what I needed to do. He soon said to me that I needed to celebrate Mass in the Temperance Hall for the people who were as shocked and shattered as myself. I would also have to be interviewed for RTE radio and television.

I momentarily murmured about the need to do a live interview on television and in my own mind wondered if I would be calm enough to do this while the “fire had not finished its work” as someone put it later.

Then I quickly realised that at such a time I was duty-bound to offer consolation to people in need of hope.

I will be ever grateful for the advice I received to speak from the heart to a wide audience on that day of profound emotion.

In a matter of days after that awful Christmas Day, the people would rally to our need for help.

In the early days of the New Year, there was a generous response to the need for temporary alternatives to the Cathedral as places of worship.

Facilities at St Mel’s College, readily offered and splendidly adapted for Sundays and weekday Masses, became the perfect answer to our needs.

Allianz, our Insurers, bearers of hope

About midday on Christmas Day representatives of our Insurers and their Loss Assessors arrived. We were immediately impressed by their use of the plural pronoun “we”. They spoke about ‘what we must do together’.

They lived up to that manner of speaking, playing a role of quite incalculable importance to us in the protection of the cathedral, clearing the site of debris and much else.

For the Diocese and Parish the destruction of St Mel’s Cathedral presented a challenge for which there was no precedent.

The setting up of what we came to refer to as The Project Committee, chaired by Seamus Butler, was a very important step.

It was tasked with guiding a multimillion euro project, creating a Design Team with the key professionals for what was evidently a complex and challenging work of restoration and overseeing every stage of the project.

It was made up of five members, including its Chairman. A Secretary was appointed later. With the appointment of a Building Company called GemPurcell for the restoration work the responsibility of the Project Committee intensified. The work of this Committee was beyond praise.

I began this short memoir by referring to the ominous sound of a phone ringing in the early hours of Christmas Day 2009.

I was to receive another phone call on December 7, 2011, again bringing bad news. This time the caller was Niall Meagher, the Project Manager of the Cathedral restoration.

He gently broke to me the shocking news that our Lead Architect, Dr Richard Hurley, had died suddenly. Richard really wanted to receive this prestigious appointment as his last contribution to his profession. He worked with the utmost diligence from February 7 of that year until his death on December 6.

It is his vision that makes the restored St Mel’s greatly admired. His plans were carefully and expertly implemented by Colm Redmond MRIAI who had worked alongside him for the last productive phase of his life.

In conclusion, let me say to all who gave of their best to planning, supervising and assisting in any way in St Mel’s Cathedral Project that I feel deeply privileged to have come to know you and admire your dedication to the restoration of this House of God.