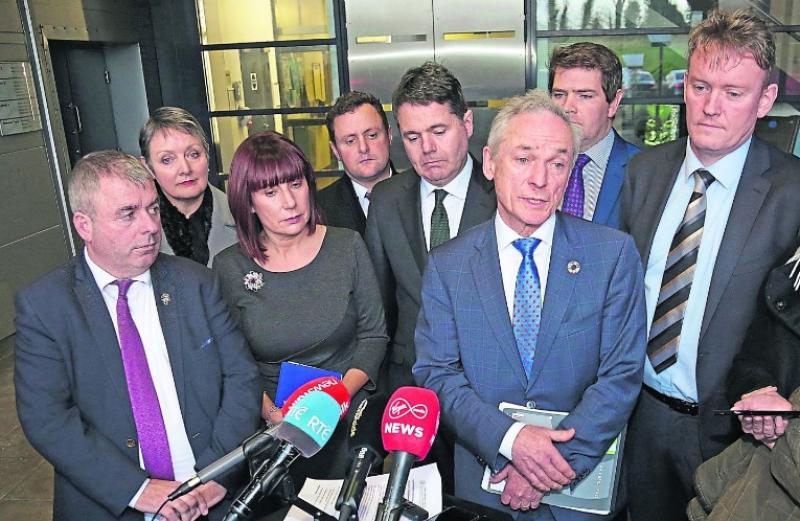 Minister for Communications, Climate Action and Environment, Richard Bruton, alongside the Minister for Finance, Public Expenditure and Reform, Paschal Donohoe, Minister for Culture, Heritage and the Gaeltacht Josepha Madigan and the Minister of State for the Office of Public Works Kevin Moran, was in Lanesboro on Monday, to discuss the planned closure of the ESB power plants at Lanesboro and Shannonbridge.

The ESB issued a statement last Friday, November 8, confirming that they will cease generating electricity at their Lough Ree and West Offaly power stations by the end of 2020.

After meeting with collaborative groups and workers earlier on Monday and taking a tour of a rehabilitated bog, Minister Bruton & Co then addressed the media and fielded questions outside of the Lough Ree power station. Minister Bruton also met with Union representatives and Oireachtas members.

Minister Bruton used the opportunity to reiterate the commitment of the government to the Midlands region.

He stated, “We are here to try and develop an alternative future for people, because whether we would like it or not, we have to exit peat much earlier than we had planned.

“We now have to make sure that we have alternative employment for people. We set out what we are hoping to do in the short run and how we are going to develop a Just Transition path in the longer term with the support of Kieran Mulvey (Just Transition Commissioner) working here locally.

“There is a lot of food for thought from what people have said, which we will work on and develop.”

He added, “Just Transition is at the heart of the government’s Climate Action Plan. We are here to listen to those affected and to see first-hand the new, sustainable opportunities that the transition to a low carbon economy will open up.”

Jobs and re-training opportunities will be at the heart of the government’s just transition plan:

l  400 jobs direct and indirect being created to retrofit homes in the Midlands.

l Up to 100 Jobs through the National Parks and Wildlife Service to rehabilitate bogland.

Minister Bruton said he understood the feeling of frustration among workers.

He stated, “As you can imagine there is a lot of frustration. These people have given their life to these power plants and you can well understand how they feel.

“They wanted to see that these job opportunities are turned into reality.

“Some of them would be naturally frustrated that it will take time to see these things come to reality, so there is a very strong message that we need to see these proposals realised.

“We have been forced to exit peat production early, but we need to create an alternative future. That is really the challenge the government has to take up.

“We are going to see this through,” he vowed.

Continuing he said, “The government is determined to create an alternative future for people. There will be alternative job opportunities that will be sustainable.”

Minister Bruton says there are funds of €31m available to support new initiatives.

He said, “As a government want to make sure that we now carve out alternative opportunities.

“We have pointed the way of certain paths that we can explore, but we want to do more. That is why we have flexible funds available to support new initiatives that can be sustainable.”

Minister Bruton praised many of the ideas presented during a meeting with the local collaborative group.

“I have heard from people numerous initiatives which people believe could be opportunities. An opportunity for a Food Hub was set out here in Lanesboro as a possible opportunity.

“There is a lot of ideas being developed here and I think the purpose of having a Just Transition fund is to allow the best of these ideas to be turned around to become feasible and implemented where they can be.”