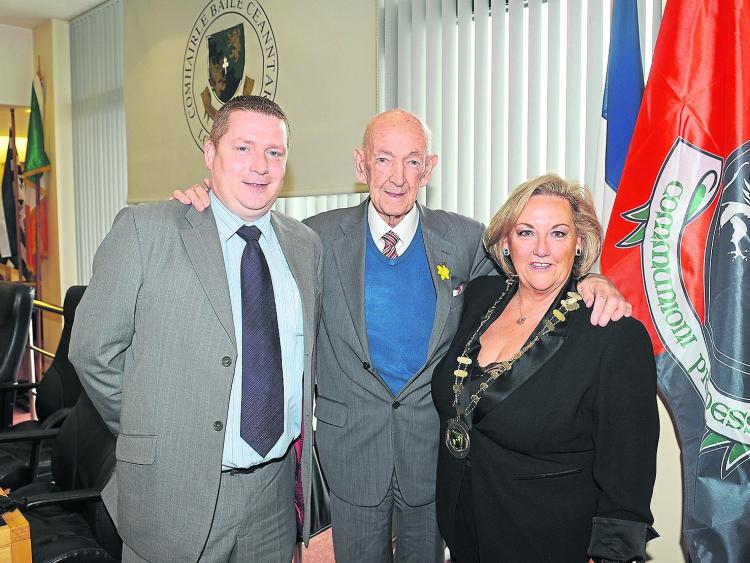 The late Mel McNally, pictured with Tony Flaherty and Peggy Nolan, during a 2013 reception held in his honour and organised by Longford Town Council

Tributes are being paid this week to renowned and well respected Longford photographer Mel McNally who passed away in London last weekend.

The much admired and proud Longfordian was arguably one of the county’s most instantly recognisable and esteemed figures across the Irish Sea where he remained a pre-eminent figure of London’s Irish, and Longford, communities for several decades.

Like so many of his peers, Mel, arrived in London during the 1950s as Ireland struggled for economic survival and quickly made a mark on the UK capital’s societal fabric.

Having worked as a photographer in Longford at the Midlands Photographic Company, he quickly found work as a barman in the West End.

And it was in London that he would ultimately meet his beloved wife Kathleen (‘Kit), a midwife from Castleconnor, in Sligo, at an Irish dance hall with their marriage coming the following year in Leytonstone.

The pair would later set up home in Essex during the early 1960s. The couple would later go on and have two children, son Mal and daughter Rita.

President of Harlow’s Irish Association for several years, Mel returned to his true calling of photography during the 1970s, enjoying a lengthy and distinguished spell with The Irish Post for many years.

Personal heartache would come in 2013 when Kit sadly passed away.

News of the man simply known as ‘Mel’ or ‘Mal’ to so many back home has sparked a wave of heartfelt memories and recollections from across the Longford communal divide.

Tony Flaherty, former Longford Town councillor and grand nephew of the late Mr McNally, described the much admired man behind the lens as the Longford communty's “go to man” in London.
“He was always very good to the councillors and general public who would travel over year after year for the London dinner,” said Mr Flaherty.

“He always made sure the Longford people got their proper and right positions in all the photograps which were taken and he never, ever forgot his Longford roots.”

Local Councillor Joe Flaherty alluded to the father of two’s enduring and close relationship with former British premier John Major and his late counterpart Albert Reynolds as being especially noteworthy.

In a post on his own Facebook page, Cllr Flaherty said: “At the time of intense peace talks with the Irish and British government (leading to the Good Friday Agreement) he was probably the only (doubt there ever will be another) photographer on first name terms with our then Taoiseach, Albert Reynolds, and the British PM, John Major.

“On the morning of a historic breakthrough approx 500 photographers filled Downing St for that elusive special shot.

“John Major famously walked towards the mass of cameras and called on his "good friend Mel" to come inside to take a personal photo of himself and Albert.”

The late Mel McNally is survived by his sister Rose in London, his son Malcolm and daughter-in-law Sarah, daughter Rita and son-in-law John, grandchildren Erin, Katie, Thomas and Sophia and many nieces and nephews in Ireland and Britain.