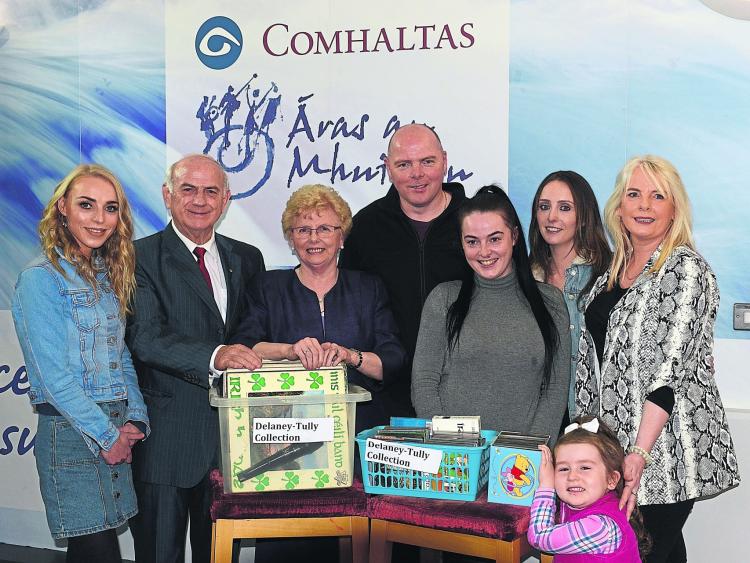 Last week The Archive at Aras an Mhuilinn was given an extraordinary collection of traditional and country music by Norah Tully from Esker, Ballinalee in Co Longford, herself an unrivalled collector of traditional Irish music over the past 60 years.

Norah’s collection consists of LPs, singles, CDs and cassettes over a variety of musical genres from traditional and ceilí band to Big Tom and Elvis Presley.

Norah Tully was originally Norah Delaney from Co Tipperary who immigrated to London towards the end of the 1950s.

There she met and married Ballinamuck native Willie Tully in 1963 and they then decided to return home to live the rest of their lives in Co Longford.

It was an emotional night in An Aras for Norah and her family as she handed over holding cases and boxes of a lifetime collection of her music to Camillus Glynn, An Cathoirleach of Aras an Mhuilinn at the Regional HQ of Comhaltas for the Irish Midlands.

Norah recalled the first record that she purchased as a young girl, back in Tipperary in the 50s of The Tulla Ceilí band and indeed of the countless others she purchased in music shops all over Ireland and England ever since.

Unfortunately Norah’s husband Willie passed away four years ago and it was then that she decided that she wanted to make a positive use of her vast musical collection by making them available to The Comhaltas archive in Mullingar.

The collection will be known as The Delaney-Tully Collection.

An Cathaoirleach of An Aras, Camillus Glynn thanked The Delaney and Tully family for their very civic minded donation.

He assured them that the collection would be checked by the archivist and would eventually be put on An Comhaltas website and made available to people throughout the world.