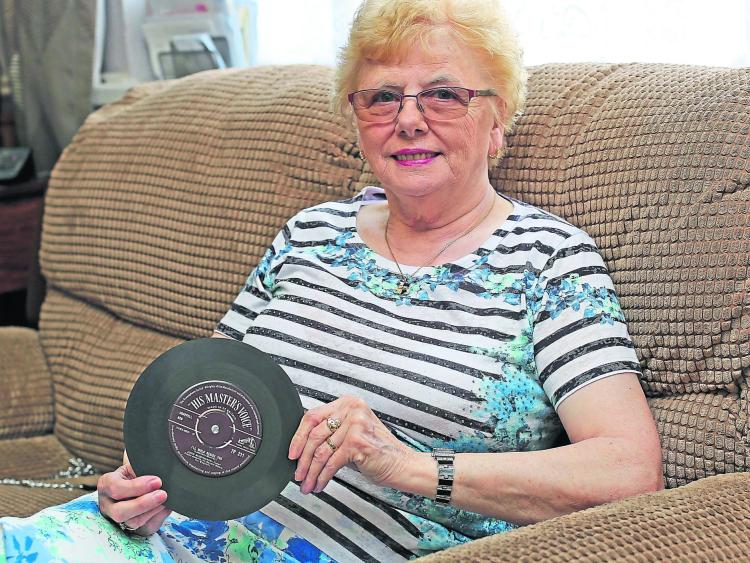 Norah with one of her last records Picture: Shelley Corcoran

Norah Tully, a resident of Ballinalee in Co Longford, inherited a deep passion for music from her late father, William Delaney, a passion which has continued for well over five decades.

Norah told the Leader: “My father played the accordian and most of his family played instruments.

“He gave me the love and appreciation of music.”

The Tipperary native first began collecting music at the age of 16 and throughout the years has built up quite a collection of records, a collection she has now donated to Comhaltas Ceoltóirí Éireann.

She said: “My mother and father went to England in 1948 and I went to school in the north of England. Then when I was 16, we moved to London and I then started working.

“Every week I used to buy a record out of my wages. If I saw one I liked, I would buy it. That’s how it started.”

The first record ever purchased by Norah was the Tulla Ceilí band, a record which remains in her extensive collection. Her collection varies in musical genres from country western, to traditional to showbands and over the years Norah continued to add to her vast array of records, something she has continued in Longford since meeting her husband Willie Tully, a native of Ballinamuck, in the 1960s.

“I married a Longford man in London in 1963. He then brought me back to Longford and here I am ever since,” Norah explained.

“I have a big collection of country western music. I even have LP’s of Big Tom and Elvis. Going back to the showband era, I had them all,” she remarked.

After over fifty years of marriage, Willie sadly passed away four years ago and it was Willie’s passing that started Norah thinking about what happen to her collection in the future. Her biggest fear was that it would all be discarded upon her passing, with nobody within her family holding any interest in that form of music.

She said; “I was in the front room going through all of my records one day.

“My son is going to inherit this house and I know in my heart when he moves in, all of that stuff would end up in the bin.

“So, I said to myself I will just ring up Comhaltas to find out if I could do anything with them.”

After contacting the CCE HQ in Dublin, Norah was put in the direction of CCE Mullingar, who were only delighted to take on her lifetime collection.

She said: “I told them about the collection and they were very enthusiastic.

“So, I got them all out and put them in boxes.”

Norah will now officially present her collection - The Delaney/Tully collection - to CCE Mullingar on Wednesday, September 4. Although she admits it will be a sad occasion to say goodbye to her collection, she is delighted to see they are going somewhere they will be appreciated and urged others to do the same with their own valued collections.

“There are a lot of memories,” Norah said of her collection, before adding: “The only sad part is that my father passed away before recording came in and I never had a recording of him playing.

She added: “My ultimate aim is that they are not just dumped in a bin and forgotten about. It will be in a way, in memory of my own father who loved music.

“They (Comhaltas Ceoltóiri Éireann) want to make other people aware that when relatives pass on and they have these relics or memorabilia, that they don’t have to throw it in the bin and they can donate it to CCE,” she concluded.

How 'thinking in fives' could protect you from Covid-19

How 'thinking in fives' could protect you from Covid-19