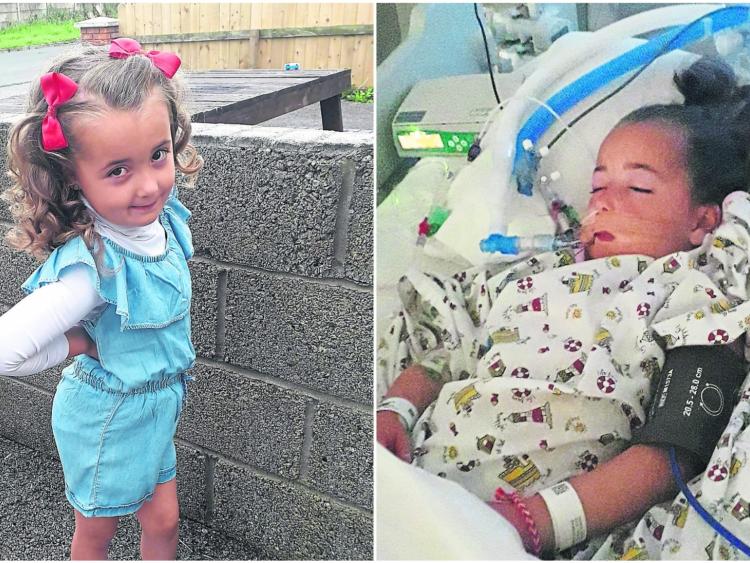 There’s not enough awareness out there for sepsis and the dangers of contracting the life-threatening illness. But Joelene Stokes hopes to change that with an awareness fundraiser which will be held at the Longford Wanderers FC Grounds on Saturday, September 7, from 2pm to 6pm.

Maliyah’s Dress Up Party and Family Fun Day will be a day of entertainment for children and families, with a bouncy castle, facepainting and plenty more, all to raise funds for the Temple Street Foundation and to raise awareness for sepsis.

And it all stemmed from five-year-old Maliyah Stokes’ own brush with the illness earlier this year, and the miracle recovery that had her back on her feet within a week.

“On May 24, or a day or two before, she had a stomach cramp,” Joelene explained to the Longford Leader.

Children get sick and have aches and pains all the time, so it’s easy to think nothing of it when they’re back up running around within the hour. But when Maliyah was feeling sick a third time, mother’s intuition kicked in.

“She wasn’t herself. She had a cramp again and was feeling sick this time and trying to get sick. She was drinking fluids but couldn’t keep it down as much. And she had a bit of tiredness and I thought it was a stomach bug,” said Joelene.

“But something told me to go and get it checked. I was worried and couldn't settle so I asked my brother if he could bring us to Midoc.”

Her condition was a mystery even to doctors that night, who said she was fine and to take her home, but stressed that if there was no improvement, she should be brought back in immediately.

“He said the worst case scenario was that she’d go to Mullingar for a drip, because she looked like she was dehydrated,” said Joelene.

The next morning, things got worse. Maliyah was feeling sick and exhausted and just wanted to lie on the couch but it was a change of colour in the little girl's complexion that set alarm bells ringing.

“I brought her down to the couch and I looked at her and her lips started turning blue and her fingertips. But she wasn’t giving out. She wasn’t complaining. She wasn’t able,” Joelene recalled.

“So we said, right straight to Mullingar because the blue lips would frighten you. So we brought her to Mullingar. She went for a checkup straight away and they didn’t know what it was. She had no cuts for sepsis. She had no loose teeth. She had nothing. All her symptoms were was a stomach bug.

“It took the doctors a while to figure out as well and they said what made you bring her? And I said her fingers and her nose and her lips went blue and they were going darker. And they said sepsis there and then.”

From there, it was a whirlwind for Joelene and her family. Maliyah was put in an induced coma and treated for her condition and the entire community banded around the family, sending well wishes and prayers for the little girl's recovery.

“It still hasn’t fully hit me but we know how close she could have been to death. We’re reading all these things about little babies getting amputations to arms, legs. It’s so serious. A throat infection could lead to it. It’s the smallest things that you wouldn’t bother bringing them to the doctor for,” said Joelene.

But someone was looking over Maliyah who, miraculously, made a full recovery and was back on her feet and out of hospital within a week of her ordeal.

“The doctors said she’s a miracle. She woke up and we had to try to get her to walk and she forced herself to walk. She didn’t want to be in the bed. She’s very proud. She doesn’t like anyone around her - she likes to do things herself. And she forced herself to get up and walk and the more she was doing, the more she got her strength back,” said Joelene who is still feeling so relieved that her only child is back to perfect health.

“I didn't really know what sepsis was. I knew it was serious because I heard about older people getting it. But not a five-year-old girl.

“They reckon Maliyah got hers by two children having two different bugs - like one child having a stomach bug and another child having a different bug - and they could cross and cause bacteria that could get into the body. But they still don’t know properly what it was from.

“That's my everything. She’s my only little girl. Nothing can happen to her. You don’t expect something like that, ever. Other people. Not us. And that’s what I’m trying to get out in the fundraiser because we thought it’d never be us but it was us.

Maliyah's Dress Up Party and Family Fun Day takes place on September 7 from 2pm to 6pm. All are welcome to come along and join in the fun. Dressing up is not necessary but children and adults are welcome to do so.

All funds raised through the sale of ribbons and donations will go directly to Temple Street. There is also a link for online donations. For more information, see Maliyah's Dress Up Party and Family Fun Day on Facebook.

Read also: ‘Give my daughter back her name’, demands Longford mother in Facebook row