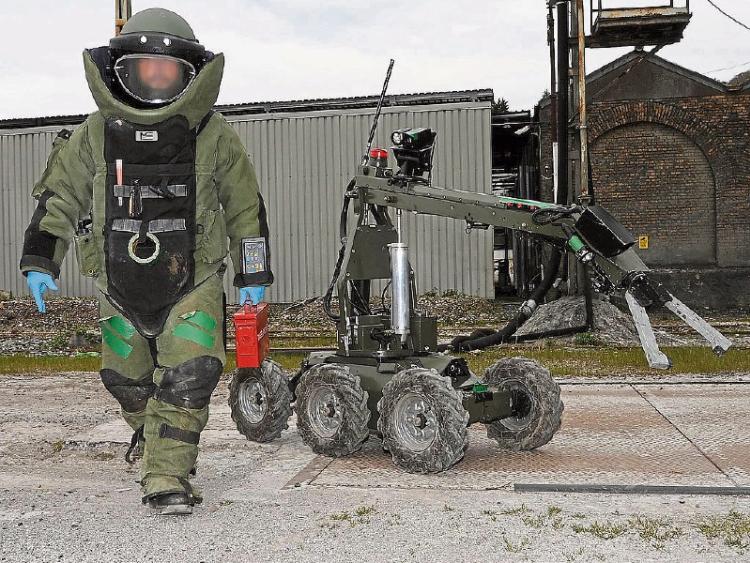 Army Bomb Disposal experts were called in to remove a viable suspect device found outside house in north Longford on Sunday night.

Gardaí have launched a public appeal for information after a viable pipe bomb was discovered in north Longford.

The device was found inside the front entrance to a house in the Killasonna area of Granard at around 9:30pm on Sunday evening.

The scene was immediately sealed off and army bomb disposal experts were called in to remove the suspect device before the scene was later declared safe at around 2am the following morning.

A follow up analysis of the item was later carried out at Custume Barracks in Athlone with gardaí confirming the device's viability this afternoon.

No arrests have yet been made, but senior detectives believe the incident is linked to an ongoing feud between two families from the local Travelling community.

Gardaí are also anxious to speak to anyone who may have noticed a navy Ford Focus, believed to be a 99'-2002 model with blackened out back windows and which was seen acting suspiciously in the area at around the time of the incident.

Detectives have carried out a thorough trawl of CCTV footage from the area and are satisfied the vehicle was involved in transporting the device to the location where it was found on Sunday night.

The car, which has since been retrieved by gardaí, had its registration plates interfered with in an effort to make them illegible to passing motorists and pedestrians.

Gardaí are also satisfied at least two people were in the car and have appealed for the public to assist them in their investigation.

As such, they want to speak to anyone who may have spotted the car travelling through the Killasonna, Lismacaffrey, Lisryan, Streete and Edgeworthstown areas between 7pm and 8:30pm on Sunday evening to contact Granard Garda Station at (043) 668512.