Harping on about Granard Harp Festival 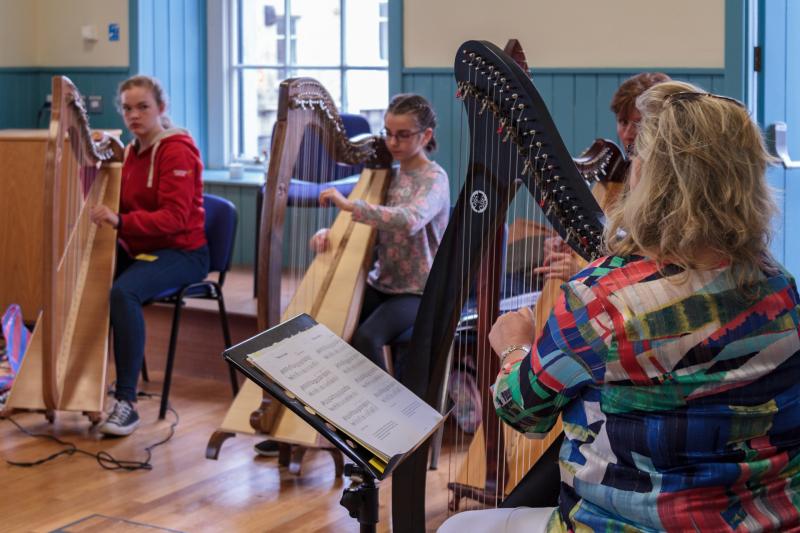 Sunday workshops at the Granard Harp Festival, which takes place this weekend

Granard is the home of the first harp festival in Ireland, which was in 1781. This year’s Granard Harp Festival is taking place from Thursday to Sunday, August 22 to 25, and forms part of the National Heritage Week programme.

The festival was first revived in 1981, led by local parish priest Canon Gilfinnan and the Trustees of the Granard Harp Festival.

Last year the festival was revived by a local committee, headed by the local John Dungan branch of Comhaltas Ceoltóirí Éireann (CCÉ) and the former Chair of the Granard Harp Festival, Jimmy Donoghue.

“Granard was always the home of the harp and we are delighted to have the harp festival up and running again with the support of Creative Ireland Longford,” Jimmy told the Longford Leader.

The Festival will kick off on Thursday evening with the official opening in the home of the first Harp Festival, old Market House which is now the beautifully restored Community Library.

Cathaoirleach of Longford County Council, Cllr Micheál Carrigy along with the Cathaoirleach of Granard Municipal District, Cllr PJ Reilly, will launch the programme. The young members of John Dungan Branch of CCÉ, along with harpers from County Longford, will perform on the evening.

St Patrick’s Church in Granard will be the venue for a traditional concert on Friday night, which will see a great line-up of musicians and performers including award-winning Cavan harpist Kavan Donohue, the Granard Folk Choir, local harpers and traditional musicians Gemma Columb, Aoife Leonard, Niamh Grier, Rosemary Connolly, Bernadine Farrelly and Olive Kilbane, to name a few.

The concert will also feature poetry by Granard-born poet Noel Monahan, who will recite excerpts from his evocative poem, Diary of a Town, and local man Des Taylor.

Read also: Festival fever continues in Longford as August gears up for even more festivities

Saturday morning will be devoted to five music workshops led by Conor Ward on fiddle, Kim Fleming on harp, Aidan Shannon on banjo, Elaine Reilly on tin-whistle and Fionnuala Reilly Maxwell on sean-nós singing. Booking is required, as numbers are strictly limited.

There will be a chance to explore Granard’s rich history on Saturday morning, with a walking tour of the town, led by local historian, Jimmy Donohue, which will include a visit to Granard Buttermarket and the Knights & Conquests Heritage & Visitor Centre.

Granard’s Main Street will be alive with music on Saturday afternoon, with thanks to the very popular traditional outdoor busking competition for children and teens. Ceol agus craic will continue into the evening, with sessions in the local pubs.

The festival will continue on Sunday with a special Mass in St Mary’s Church, featuring traditional music and St Mary’s Folk Choir.

From 3 to 5pm, Market Street will be buzzing from an open-air concert and Céilí Mór featuring local musicians. The winners from Saturday’s busking competition will be announced and prizes will be presented.

Máiréad Farrell, Chair of the John Dungan Branch CCÉ said: “We want the people of Granard to come out and enjoy the weekend and celebrate Granard’s great music tradition.

“We are very grateful for the support we have received from the local community and businesses, GAA, Longford County Council and Creative Ireland, and looking forward to a great weekend.”

Read also: Plenty of events as Longford celebrates times past during Heritage Week 2019