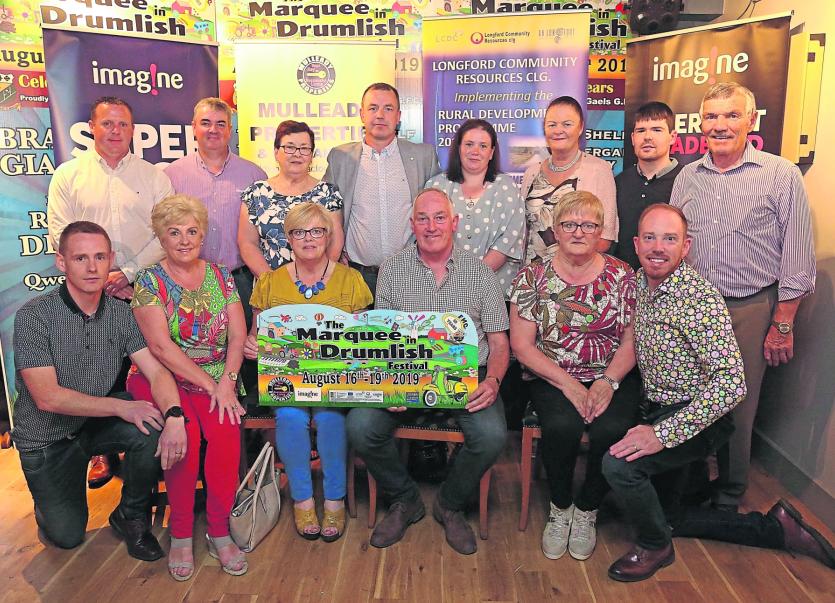 The Marquee in Drumlish Committee at the launch of the festival PICTURE: SHELLEY CORCORAN

This year marks the 10th anniversary of the first time the Marquee in Drumlish Festival was hosted in conjunction with Fr Manning Gaels.

Fast forward ten years from that date in 2009 and the festival partnership remains, with the event having become increasingly popular among music lovers over the past decade.

Now well-known throughout Ireland for showcasing some of the country’s top performers, this year’s marquee festival promises to be no different.

The first of the four nights of top class entertainment takes place on Friday, August 16, before the festival finishes up on Monday, August 19, with the culmination of the festival, dubbed ‘The Declan Nerney night’.

The festival action kicks off on Friday with some performances from local talents such as returning band, Brave Giant, Top Shelf and one of Ireland’s top DJs, Today FM's Fergal D’arcy.

Ciarán Lennon of the marquee festival organising committee told the Leader: “We have two local bands on night one with Top Shelf being from Ballinamuck, and Brave Giant from North Longford.”

Continuing he said: “Fergal D’arcy has also been with us the past few years as well and has proved very popular.”

On night number two of the festival, Saturday August 17, the music returns to country vibes, thanks to the talents of rising star Matthew O’Donnell, Robert Mizzell and Derek Ryan. Be warned now, you better bring the dancing shoes!

Ciarán Lennon told the Leader: “Matthew O’Donnell is a new kid on the block.

“We always like to give new talent a helping hand,” he continued.

Before all of this action commences on Saturday night, however, there is much more in store, especially for the younger generations.

This includes street chess on Saturday afternoon and everything is free of charge.

Read also: Host of stars to perform at Marquee in Drumlish Festival

Ciarán explained: “We have a few other events running in lieu with the marquee.

“On Saturday, Drumlish chess club have organised a street chess tournament that will be running throughout the day.

“Along with the street chess in the village, we have a kiddies disco running on the marquee site, from 2pm to 4:30pm.”

On Sunday, August 18, the action continues with performances from Queen tribute act - Qween, ‘The 4 of us’ and ‘Cronin’, who have played every Marquee for the past ten years. Read more about Cronin and their upcoming appearance on page 24.

“We are opening with the 4 of us, then we have Qween on stage,” Ciarán explained.

“They are actually one of the premiere Queen tribute acts in the country.”

The final night of the festival or ‘The Declan Nerney night’ as it is now known, will feature an array of Ireland’s finest country music stars, not to mention the marquee man himself.

“I have no doubt he will have more added in on the night,” Ciáran remarked.

Doors each night will open from 8:30pm, with music starting from 9pm. Admission can be paid on the door, but those attending have been advised to ‘get in early’ and be ready for four nights of musical action.

“Get there early and bring the dancing shoes,” Ciarán urged.

Organisers say the event, which is supported by Mulleady Properties, Imagine, Longford County Council, Longford Community Resources, LCDC, the Ledwith family of Quinn’s bar and many more, will be bigger and better than ever before, before thanking everyone who has supported them over the past decade.

“This year it is going to be bigger and better,” Ciarán vowed.

Before adding: “I just want to thank the Gray family here in Drumlish, who have provided the site for the marquee for the past ten years.

“There are also a lot of other businesses who come on board to support us in many different ways. Thank you to them.

“The biggest element is the volunteerism, it takes so many people to run the event.

“Thanks to all those volunteers, clubs, societies and organisations for supporting us,” he concluded.

Read also: Cronin among the stellar Marquee in Drumlish line-up