Host of stars to perform at Marquee in Drumlish Festival 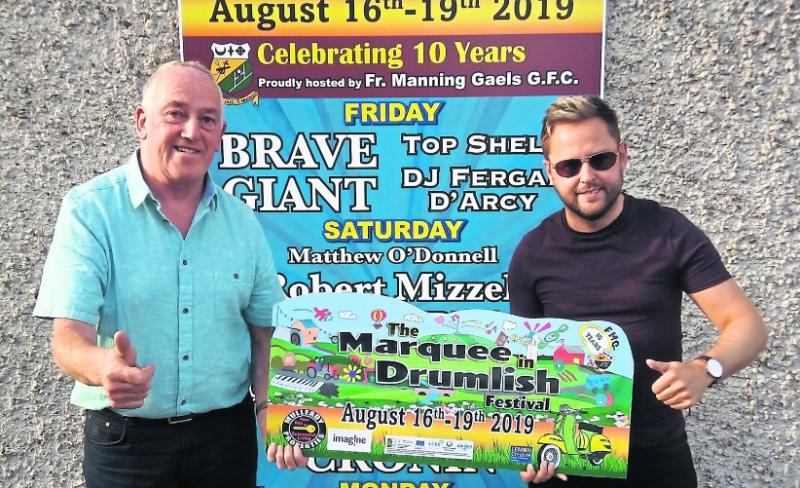 The team behind the Marquee in Drumlish Festival are to celebrate their tenth year hosting the event alongside Fr Manning Gaels.

The launch of this year’s event, which is supported by Mulleady Properties, Imagine, Longford County Council, Longford Community Resources, LCDC and many more, was held at Quinn’s bar on Saturday, July 20, with the Ledwith family, the official publican partner for the festival this year.

The marquee this year, promises to be bigger and better than ever before, with four fantastic nights of musical entertainment in store and many musical talents making their return to the stages in Drumlish.

Returning to the marquee on the first night is one of Longford’s finest musical talents - Brave Giant. They will also be joined by Top Shelf and Today FM DJ, Fergal D’arcy.

Night number two of the Marquee or Saturday, August 17, will see the festival turning country, thanks to the talents of Matthew O’Donnell, Robert Mizzell and Derek Ryan, ensuring a great night of dancing is in store.

On Sunday, August 18, the action continues with performances from none other than ‘Qween’, a Queen tribute act, ‘The 4 of us’ and ‘Cronin’, who have played every Marquee for the past ten years.

Ciarán Lennon remarked: “Johnny and Mick Cronin and their band will also be there. They are stalwarts of the festival.”

The final night of the festival has been dubbed the Declan Nerney night, with music from none other than the Marquee man himself, Declan Nerney, and a number of special guests.

“Declan has Mike Denver, Mick Flavin, Olivia Douglas, David James, Seamus Moore and I have no doubt he will have more added in on the night,” Ciáran remarked.

Doors open from 8:30pm, with music starting from 9pm. Admission can be paid on the door each night, but punters are advised to get in early.

“Get there early and bring the dancing shoes,” Ciarán urged.

The event will not only cater to an abundance of music, but also other forms of entertainment. This includes street chess on Saturday, August 17.

Ciarán explained: “Along with the street chess in the village, we have a kiddies disco running on the marquee site, from 2-4:30pm.

“There will be music, balloon modelling, different characters, facepainting and a magical puppet show as well. And, it is free of charge.”

On Sunday, August 18, the committee will also host Monster Bingo in the 98 memorial hall in Ballinamuck. Commencing from 3pm, the interest is expected to be huge.

“There is €2,500 worth of prizes on offer as part of a monster raffle and all proceeds of that will go to Longford Meals on Wheels.

“Each year we choose some local community and voluntary groups to support,” Ciarán added.

Ciarán said the event would not be possible without the support received from local businesses and the wider community, such as the Gray family who will host the event on their lands again this year.

“There are a lot of other businesses who come on board to support us in many different ways and our thanks goes out to them.

“I also want to thank the Gray family here in Drumlish, who have provided the site for the marquee for the past ten years.”

For those looking to don their volunteer hat and help out over the course of the festival, a volunteer registration night will take place this Friday, August 9, at Monaduff Clubhouse from 9pm to 10pm.

All welcome to attend and anyone who cannot but wishes to volunteer, can contact Lorraine on 0864017301.

Pictures: Fun and top class entertainment at The Marquee in Drumlish