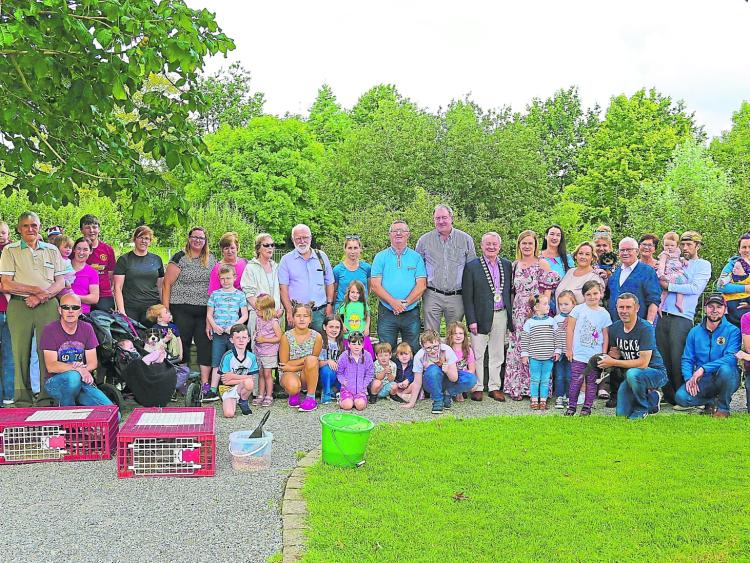 Club chairman Tommy Reynolds explained, “For over four decades the Club has actively contributed to wildlife conservation in Longford.

“Apart from releasing pheasants and mallard in the wild each year, we run a continuous predator control programme.

“The decision, in conjunction with Longford County Council and County Longford PPN, to release these colourful species of duck is most welcome and will contribute to a greater awareness of wildlife for visitors to the wonderful Mall complex”.

Jim O’ Hara, PPN contact for Templemicheal Shooting and Conservation Club said, “In the early 1980s, the club contributed to the Mall complex by releasing Mallard whose offspring are still a feature of the park.

“Sometime later, the club procured greylag wild goose eggs and hatched out 20 young geese. These were kept in a pen and fed in the Mall.”

Jim also went on to state that, unfortunately, after an attack by some dogs only four survived. On reaching maturity they stayed around for some time but eventually left. The club plan to repeat this project again in the not too distant future.

Siobhán Cronogue, PPN Development Officer said, “Bio-diversity programmes are on the increase in Longford with the canal nesting boxes and the swift conservation programme together with the increase in the number of beekeepers in the area.

“The PPN has been very focused this year on raising awareness around biodiversity and held one to one clinics with twenty Tidy Towns groups earlier in the year while also hosting two biodiversity workshops which were well attended by a very diverse range of their membership.”

She commended the Templemichael Club for giving up their time to apply for Council funding and for organising the purchase and release of the ducks.

She went on to say, “These amazing volunteers are the reason so many families get so much enjoyment when they visit the Mall.”