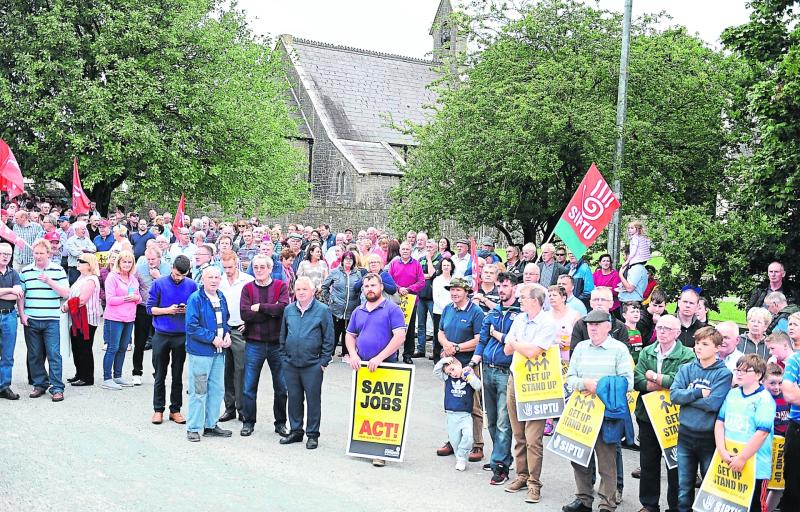 As people gathered in large numbers in Lanesboro for the Bord na Móna (BnM) workers protest, many political influences gathered to show their solidarity with those affected.

Among those to attend and lend their support to the workers, was Cathaoirleach of Longford County Council Cllr Micheál Carrigy.

He said: “I am here to support the 150-odd workers that have been treated shabbily by Bord na Móna.

“As chair of the council, you have the full support of all the members of Longford county council.”

Cllr Carrigy pledged to put pressure on Minister Bruton to find a resolution.

“I will do whatever I have to do to put pressure on Minister Bruton to make sure that this comes to a resolution,” he stated.

The general election candidate questioned the timing of the job losses and called the treatment of workers by a semi-state body ‘unacceptable’.

Also adding their support to the workers’ cause was Robert Troy TD, who described their treatment by BnM as ‘disgraceful’.

Troy said: “I think the manner in which a semi-state body has treated its workforce, is disgraceful, both its permanent workforce and its seasonal workforce.

“There is a responsibility on Minister Bruton to act.

“He has the power to act if he wishes to act.”

Mr Troy noted that although everyone is aware of the need to phase out fossil fuel use, a commitment was made by Bord na Móna that nobody would lose their jobs before 2027.

He then called on Minister Bruton to bring the CEOs of BnM and the ESB together to find a resolution, before adding that,

“Under no circumstances can the people in this region be used as sacrificial lambs.”

Minister ‘Boxer’ Moran, speaking at the protest, also pledged his commitment to the cause.

He stated: “I want to see no unemployment in this region.

“For far too long we have been left behind, but now we have voices.

“We are here with you, we are united and we will fight for ye until the day we die.”

Independent TD, Michael Fitzmaurice, was another to weigh in on the situation, and he dubbed the events an ‘unjust transition’.

“A year ago, we sat down with BnM. They showed us lovely glossy magazines of where they were going, called a just transition,” Fitzmaurice stated.

“This evening proves the unjust transition that’s going on.”

Fitzmaurice pledged his continued support to the workers and says he will demand a recalling of the Dáil if nothing changes.

Fitzmaurice remarked, “Minister Bruton has to make sure that jobs are protected.

“I will look for the recalling of the Dáil in the coming days if this is not sorted,” he vowed.
Former Minister for Communications, Climate Action and Environment, Denis Naughten, questioned why the workers were let go when a lot of work remains to be done on the bogs in question.

“We will not tolerate it,” said Naughten of job losses.

“What is really frustrating about this is that we are talking about 150 jobs, 150 people and families facing redundancies and being let off, when there is still work to be done. If there is never another tonne of peat taken out of our bogs, there is ten years work left in the 14,000 hectares of bog here in Mount Dillon that has to be rehabilitated.

“For every one of the 150 staff, both permanent and seasonal, there are 233acres of bog that needs to be rehabilitated.

“There is a decade of work to be done here,” he reiterated.

Read more: Save our jobs: Hundreds turn out for Bord na Móna protest in Lanesboro