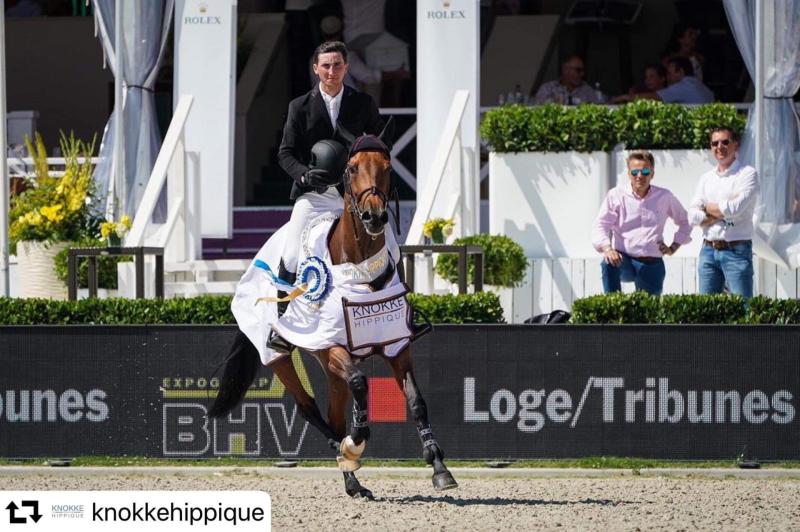 The horse riding enthusiast and former student of Ballymahon VS, has just made his way back from a hose show in Knokke Hippique, Knokke-Heist, Belgium.

“I started off week one with a lovely clear round from Jordan II in the 1.15 m and then Florida van maarle went and got a well deserved 6th in the 1 star 1.30m grand prix qualifier. Then with a qualification spot got for the grand prix, we just had to wait for Saturday.

“It was the 1 star grand prix, where a field of 81 competitors lined out. There was 13 clears going into the jump-off.”
At this stage, Jordan was 7th clear and Florida helped him storm into the lead.

He said, “It proved to be a fast class but Florida went in and stormed her way to the lead.

“It was an incredible day and an even better feeling winning my first international grand prix.”

Jordan spoke of his pride at hearing the Irish anthem blaring prior to his competing, reaffirming to him that all his hard work and effort was worth it.

“It really sank home that this is what all the hard work is about,” he said.

This wasn’t the end of the success for Jordan on his travels either.

He explained, “On Sunday, Jordan II produced a lovely double clear in the 1.15m class.

“Then on Sunday, I was also honoured to accept the prestigious under -25 young talent award, which was awarded on the combination of judging and results of the week.”

It was then onto week two for Jordan, who jumped with Under Fire du lozon and managed to clear 1.10m. He then achieved a clearance of 1.15m with Jordan II.

Jordan added, “On day two, Florida van Maarle was up to prove she wasn't just a one hit wonder and went and slotted into 6th place, to be granted my 1 star grand prix qualification.

“Day 3 consisted off the 1 star grand prix, with 97 competitors lining out. I was number 12 and produced the first clear and then there was only 7 clears to go forward for the jump off.

“Since I produced the first clear, I would then go first in the jump-off. I then, unfortunately, had one jump down and the winner was the only double clear, but it was still incredible to get second place, two grand prixs and two top-two placings.”

On Day four while jumping with Under fire du lozon and Jordan II in the 1.20 class, both horses jumped clear.
Jordan wished to thank the team at dagobertshausen and others, without whom he says his success wouldn’t have been possible.

He said, “It all wouldn't have been possible without the incredible team at dagobertshausen.

“I am also grateful to Rodrigo Pessoa (Irish chef d’equipe) for giving me Jordan II to team up with,” he concluded.