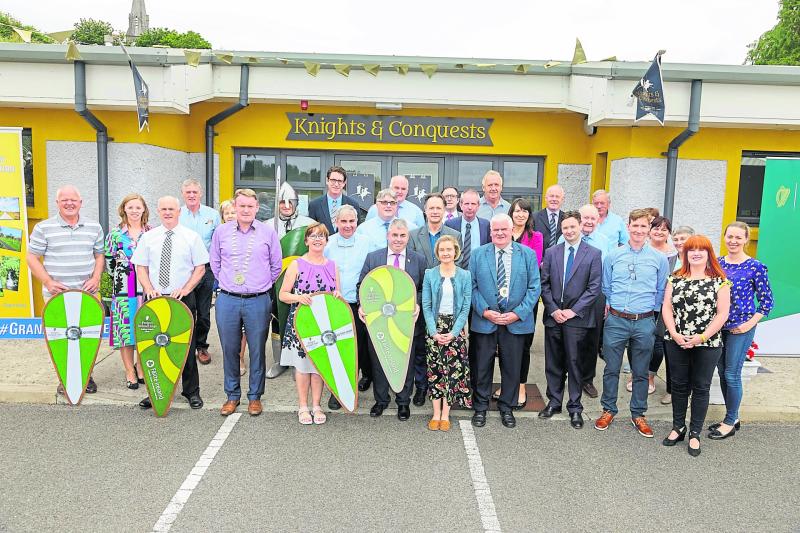 Longford's tourism renaissance is showing no signs of slowing following confirmation this week of a six figure cash injection which will bring a €3.8m heritage park to Granard.

State tourism agency Fáilte Ireland alloted €640,000 towards the onset of a ‘Norman Heritage Park' which will form the backdrop to the north Longford town's plush and recently developed Knights & Conquests Heritage Centre.

The six figure sum, combined with almost €3m in rural regeneration monies and funding from Longford County Council, brings the overall cost of the project to virtually €4m.

Minister of State for the OPW Kevin 'Boxer' Moran said the spectre of such a development would bring untold fiscal benefits to a county that's very much on the crest of an economic wave.

“There is no doubt that the Norman Heritage Park at Granard will be a key attraction in Ireland’s Hidden Heartlands and the team at Fáilte Ireland has helped to shape the project along with key partners,” he said.

“This idea, from conception to securing funding, has been a great example of the public sector and communities coming together to create a brilliant attraction for visitors and locals alike.”

Billed as “Ireland’s only authentically recreated Norman village”, the concept has been the best part of seven years in the making.

Fronted by a small, but dedicated band of local volunteers from the aplty named Granard Motte Community Enterprise CLG (GMCE), the development sits on 15 acres of land with a state of the art visitor centre and its 12th century motte in the background.

The village, according to its main protagonists, will provide an immersive experience for visitors that will transport visitors back 800 years to experience how people of that era lived, worked and played – all delivered through live acting, innovative displays and activities, as well as augmented and virtual reality.

“It’s a big day for the local community as well I would suggest,” said Fáilte Ireland's Head of Attractions Mary Stack when the suggestion was made the occasion was significant for Granard and the agency she represents.

“It is a community led initiative and it shows there is a confidence in tourism in Longford at the minute and is why Fáilte Ireland is here.”

“It’s a sign of yet more progress and advancement being made and through time the hope is this place will not just be fully developed but become a major tourist attraction for Granard and the midlands,” he said.

His north Longford political counterpart and County Council Cathaoirleach Cllr Micheal Carrigy said the investment illustrated the feel-good factor which was very much evident in the county at present.

“It’s not just for Granard, it’s for the entire north Longford area and the county in general,” he said, while referencing the imminent arrival of Center Parcs at the opposite end of the county.

“It will bring in the region of 40,000 people a year into the north Longford area when it is fully operational and will provide 25-30 jobs which is increased spending in the town itself and will give opportunities to maybe set up on the back of it.”

Cllr Carrigy heaped praise on locals and in particular those alligned to Granard Motte Community Enterprise committee whose foresight brought about the project's development.

And he took aim at recent statements made in the media over Longford's crime reputation, comments he said gave a distorted view of the county's current standing.

“I was very unhappy with the statements made in the media a couple of weeks ago linking us to certain crime gangs and I feel a lot of the things which were said were a total misrepresentation of the fact,” he said.