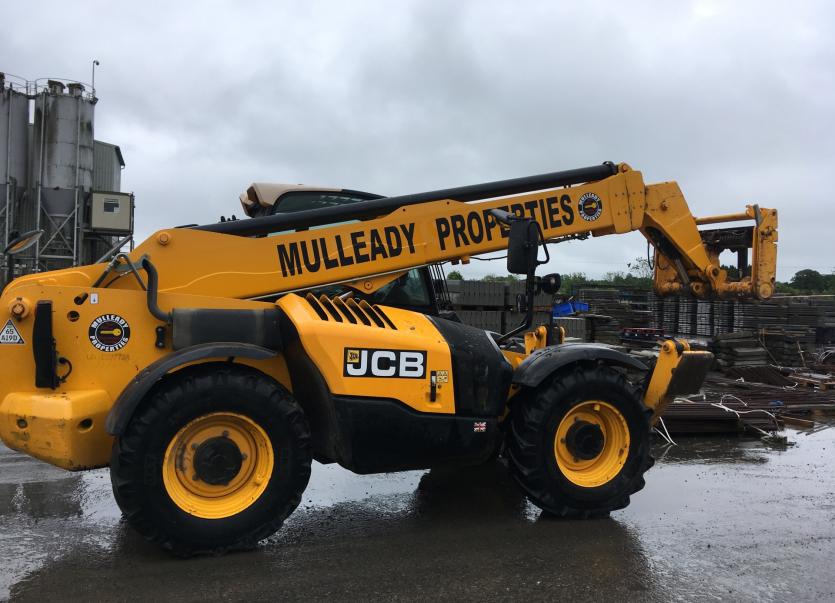 The JCB recovered in Hamburg

There has been some good news today for the owners of Longford company Mulleady Properties & Co Ltd, Friday May 31, as a JCB stolen from one of their sites in recent weeks has been returned safe and sound.

Owners of the Longford based business, which is owned and operated by brothers Martin and Mike Mulleady, awoke on the morning of Monday, May 13, to find their 2014 JCB 540-140 had been stolen from a site in Ballymahon.

The vehicle, which is valued at €50,000, was stolen at approximately 4:30am that morning and CCTV cameras at Center Parcs Ballymahon, confirmed a sighting of the JCB being transported down the road at that time.

“It was stolen at about 4:30 am in the morning.” Mike Mulleady told the Leader.

Although Mike Mulleady and his team had given up hope on recovering the stolen property, they were ecstatic to see it returned to Longford earlier today.

“It was sadly missed for two weeks, but it is back in use again,” he beamed.

The machine was located thanks to a built-in tracker, which the they only found out was working the Friday after it was stolen, three days later. The tracker showed the machine was in Dublin Port, but upon inspection they could not find it and the signal was eventually lost.

“We didn’t know when we bought the machine if the tracker was live or not. We only got the tracker going on the Friday morning, three days after.” Mike said.

“The tracker came alive on the Friday and showed it was in Dublin port. We checked out Dublin port, but we couldn’t find it as the JCB had been loaded at that stage.”

A few days later, the signal was recovered again and showed the JCB was travelling through Rotterdam, Holland and onto Germany. The tracker enabled police, Interpol and Gardaí to eventually recover the machine, all the way in Hamburg, Germany, much to Mike’s delight.

Mike said, “The tracker went dead for two or three days again, but it came live again in Rotterdam.

“It was eventually picked up about twenty minutes north of Hamburg,”

Mike said the machine was recovered thanks to the hard work of Gardaí, Interpol and police across the pond. He had a special mention for local gardaí, Sergeant David Bunn, Eugene O’Sullivan and Tom Killion.

He said, “There was huge work done by Interpol and Gardaí.

“JCB, they did savage work too because they had to set the tracker back. It was a huge effort by everyone.

“It is a magnificent story for everyone involved.”

Mike concluded by urging fellow machinery owners to ensure the trackers are working correctly on their machines and to ensure their sites are safe and secure at night.

"Only for the tracker, this machine would have never been found." he concluded.