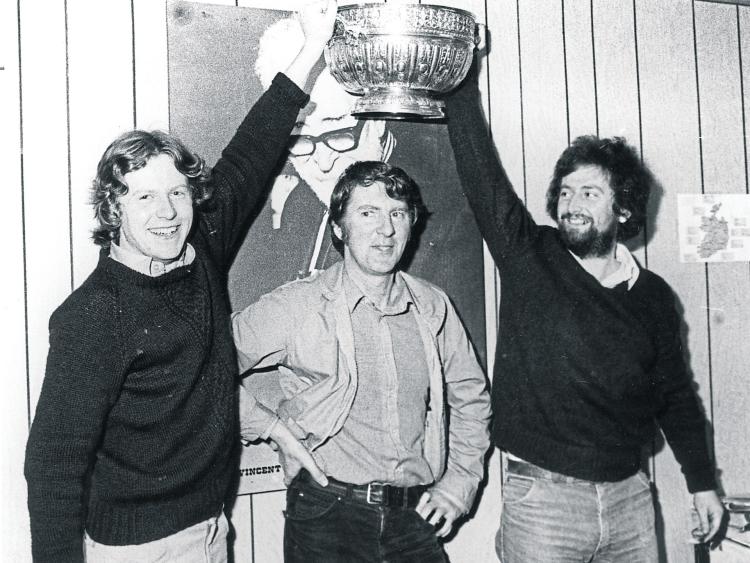 Eugene McGee wasn't a man who said an awful lot. I worked for him for eight years and for five of those years would have been his number two here at the Leader.

He rarely spoke. There was never much small talk but as I and anybody else who ever worked for him will attest, that didn’t matter. Because we would have gone through brick walls for him.

That was the respect he commanded. He didn’t need to speak much but in fairness, when he did, it was always succinct and oft times laced in that famed Colmcille sarcasm. His castle was at home with Marian, Conor and Linda. After those he was happiest I think amongst not the GAA community but his own people – Colmcille people.

I've lost count of the times I saw him shed quiet tears at the passing of another Colmcille stalwart and nobody was ever able to write a North Longford native's obituary like Eugene McGee.

In the early years of his time with the Leader, he continued to dabble in farming and I think he wanted to stay true to his roots. But in truth he was a bad farmer and he happily came to that realisation in time. He will be best remembered as a GAA manager and GAA writer but his words encapsulated much more. He embodied the challenges and delights that came with living in rural Ireland.

I remember articles from him after Dromard won the county final in 1999 and the half parishes to Mullinalaghta and Gowna won the intermediate and senior titles in Longford and Cavan respectively on the same day. Those articles were snapshots in time and oozed the love and respect that Eugene held for these communities.

He took over the Leader after a long running strike in 1983. It was an exceptionally brave move for a young man with plenty of debt. He was supported by good friends and investors – Padraig Gearty, Sean Murray and Michael Dolan. He was there for the halcyon days of the provincial media.

I doubt he would have coped well in today's social media charged landscape, but back then, Eugene was an icon and the Leader was a flagship title.

As the country flourished through the 1990s on what we now know to have been a false dawn, so too then the provincial press. Advertising and circulation revenue soared year on year. Eugene was always cautious but was never afraid of a punt or shirked the call to invest. The Cavan Leader was a case in point and he readily acceded to add to the newsroom if a compelling case was made.

I joined the Leader in 1997 after the death of John Hughes. Famously after the funeral, Eugene invited all the journalists in attendance back to the Leader for a reception. The drink from the nearby Market Bar flowed and when Eugene stood up to deliver his eulogy for the late John Hughes, we knew we were truly in the presence of a great man, a great leader, but above all else a gentle soul.

But he didn’t suffer fools lightly. A social drinker at best, he invariably went every Monday evening for a couple with another Leader house veteran and Colmcille native, Seamus Doyle. The destination of choice these days was John Browne's. But back in the 1990s, it would have been Gerry Gregg's on Ballymahon Street. They would have gone in early, kept to themselves, and rarely stayed beyond a couple.

Back then there was a local politician, who will remain unnamed, but invariably tried to snare Eugene in conversation. Eugene rarely rose to the bait. Anyway one evening the politician left perplexed and Eugene turned to Gerry Gregg and said: “You should put a sign in the window to say that fella drinks here. T'would pull the crowds in.”

He didn't suffer fools and nor was he renowned for his patience. I lost count of the times he'd walk away perplexed at the length of time it was taking photographer, Joe McDonagh, to develop a roll of film in the old dark room. And then there was the late Harry Farrell, who operated at a different pace to the rest of the newsroom.

At times Eugene grew frustrated but invariably bit the lip because much like he had the pulse of North Longford, he knew that Harry held the beating heart of old Longford town in his hand. And that was evidenced in Harry's many golden pieces in the Leader over the years.

We probably had more fun at Eugene's expense back in the day than he or we realised and that in itself was a measure of the man.

A young reporter from Meath, John Donohoe was with us for several months at this stage and was looking after the entertaining page. He decided to make them a little racier and used the pen name 'Johnny Dee'.

One Tuesday evening Eugene was examining the proof pages and exclaimed to all: “Who is this Johnny Dee fellah? Are we paying him?” There was silence for a few seconds before John Donohoe said; “Yes but not enough.” Eugene turned away with a wry smile.

Or there was the time that Joe McDonagh was teaching Tai Chi and he decided to assemble all 18 staff members in the newsroom on the first floor of the old Leader building on Market Square. It was a busy Tuesday morning and not the best of days for Tai Chi. We were stretching away and almost oblivious when Eugene burst through the door as only he could. Other bosses would have flipped. He simply retreated and came back later.

Over the years he assembled a motley crew of characters under the Leader banner. A favourite was the late Cormac McGill, a retired teacher from Donegal, who lived in Dromod and covered Leitrim GAA for us. He was an ardent Republican and when Eugene announced that the then UK ambassador was to visit the Leader offices, Cormac resolved to stage a protest. The visit went ahead, Cormac staged a silent protest and Eugene never batted an eyelid.

Cormac was larger than life and would have been 'a fair beast of a man' as Eugene might have said. One day we could all hear him coming up the stairs, chiming out an auld Republican ode to a dead hunger striker, “my body weak with hunger.”

We could see Eugene fighting back one of those famous wry grins of his, as the most unlikeliest embodiment of hunger striker came into the newsroom.

We learned an awful lot from Eugene McGee. Most of it was unsaid. But in a nutshell, he taught us to value the simplicity of life; the fragility of life but most of all he taught is to value all things Longford.

Pictured above: In this picture by photographer Willie Farrell, Eugene McGee, then Sports Editor of the Longford News, celebrates an Offaly Leinster Final win in that paper's newsroom with reporters John Byrne (left) and John Donlon (right), overlooked by a photo of founder Vincent Gill. Reporter John Byrne is now in Rockaway, New Jersey; John Donlon, a native of Moydow, Co Longford was orginally a Junior reporter with the Longford Leader, then Deputy Editor of the Longford News and latterly with the Sunday World PIcture: Courtesy derek cobbe