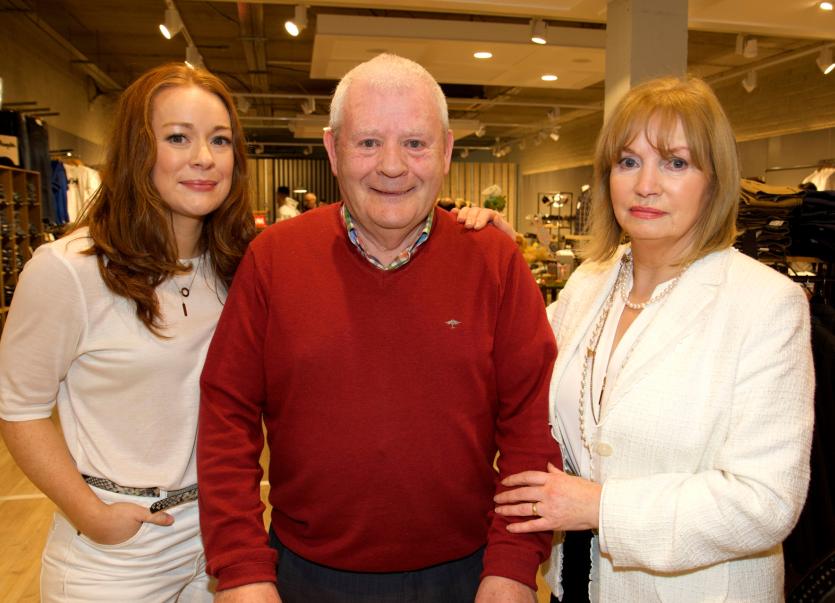 Durkins in Longford are fresh after a relaunch, which took place on April 20.

The family-run business was one first started in 1933 by one Con Durkin. Over the years the business has developed from life selling ‘solely’ shoes, to providing Longford with top quality footwear and clothes at an excellent value.

The business has now been in operation for 86 years and Claire Jr is the third generation Durkin to take the reins of this business, which has become synonymous with life in Longford.

Life for the Durkin family in the retail industry began with Claire’s Grandfather Con and his brother, the latter of which ran his own store.

“My grandfather was a shop boy in McGuinness’ store here in town. One part of the store was drapery and one part was a shoe department. He worked in the shoe department and served his time there,” Claire Jr told the Leader.

After learning his trade, Con decided to take the plunge and open up his own shoe store, which he did to great effect in Longford in 1933.

Little did he know that the establishment would go on to last three generations and counting, and have a lasting impact on the lives of the Durkin family, no more so than Claire’s father, Joe, who began to learn the trade from a very young age.

Claire remarked, “My father actually lived upstairs for most of his life, up until 1979. He worked alongside his father and then he eventually took it over in the late 60s early 70s.”

It was upon Joe taking over from his father, that things at Durkins really began to take shape and gather pace. It was Joe who was the man behind the implementation of many changes at the store and they haven’t looked back since.

“The shop was quite small at the time, it was about one-third the size of the store now,” Claire noted.
“My grandfather started it off as a shoe store and it was my father who really changed it. Dad expanded it over the years to include drapery in the 60s and sportswear in the 1980s. We used to even do children’s wear as well.”

While Joe was in command of the store, his wife Claire looked after their five young children. All five children played their own role in the store’s success throughout the years, spending their school holidays and weekends helping out in any way they could.

“We all worked in the shop from when we were very young. I started off when I was about ten, getting pocket money for ripping up boxes for the bins and helping out around the store,” Claire reminicised.

“It was always just a part of us.”

Also read - Letter to the Editor: Notre Dame or Mother Earth? We can save both but will we?

Claire Jr is now the only one of five children to retain an involvement in the store, after first moving back to the area in 2011 to set up her own photography studio. Although her intention was to focus solely on photography, life had other plans, and upon her father falling ill Claire jumped in and took control for the first time.

“I came home to set up my photography studio in 2011. I was on maternity leave when dad got sick and I just jumped in, out of necessity rather than planning and four years later I am still here,” Claire laughed.

Claire quickly became immersed in life within the doors of the family store and she has since taken it to even greater heights than ever before. Although Claire had put her photography career on hold for the past four years as she came to grips with life as a store manager, she aims to combine both passions in the future to the benefit of both businesses.

Reminiscent of her father first taking control of the premises, Claire set about putting her own stamp on Durkins'. This led to extensive planning and work into an ambitious relaunch, which was finally completed within the past few weeks.

“It was much needed,” said Claire of the redesign, “The last renovation was carried out some time in the 1990’s and I just saw an opening.

“As a photographer, I just wanted to put my stamp on it and bring it up to the 21st century.”

The first thing on Claire’s agenda was shaking off the old style image the store held.

“We had a really good business in the 1990s. It was very much on trend and a cool store, so I wanted to get that back a little bit. Coming in fresh, I saw gaps in the market.

“We combine a few talents together to make this just a little bit different than the average store.”

With the help of some local tradesmen, builders and suppliers, Claire and the family re-opened their doors on Ballymahon street, to what is now a cool and trendy, vibrant store.
Helping out with branding was Loretta Oasis design and TD combined building services carried out the majority of renovations, with the help of Woodhavens, Parkers Edgeworthstown and many local electricians.

Claire said, “I designed the store myself. All of the providers we used were local. In fact, everybody we used were local, we believe very strongly in that.
“We understand the importance of shopping local and as best we could, we did. I would say 90-95% of it was completed by local people .”

Although a lot has changed in Durkins as of late, the ethos behind the store most definitely has not.

“Our staff are well known for being really friendly, approachable and not pushy in any way. Our bag says quality of service and I think we definitely offer that.”

The team of eight staff pride themselves on offering great value for money, in standing with the Durkin traditions.

“It is definitely still a store where you will find value for money. We are always conscious of our price points.

“It is a mixture of fashionable, good quality clothing at a good price,” Claire added.

Claire took time to thank the people of Longford for their support over the past 86 years and says their success is down to the loyalty shown.

“We have some very loyal customers and we are very fortunate that throughout the past three generations people have continued to support us. We can’t thank them enough for that.

“To the people who haven’t been into the store in a while, they should come in and check us out. We have a great new look at I think they will be pleasantly surprised.”