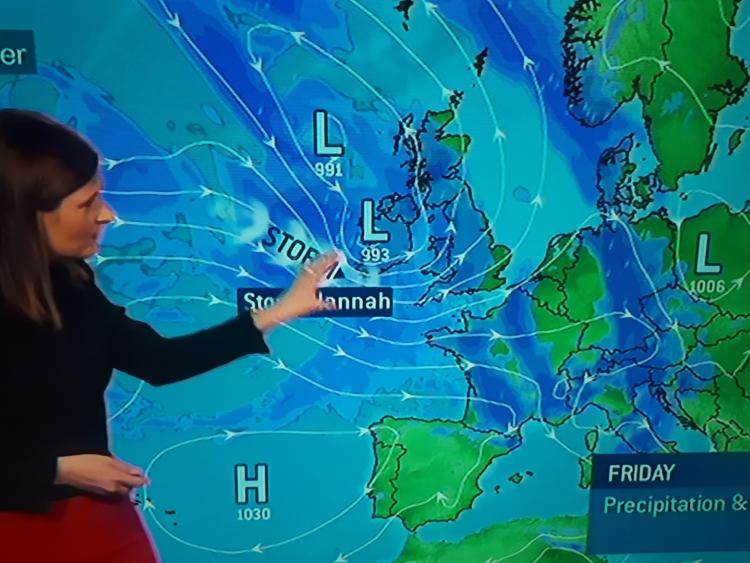 Storm Hannah will bring winds up to 130 km an hour and heavy widespread rain according to the latest weather forecast from Met Éireann.

In her forecast after the RTÉ News, meteorologist Michelle Dillon gave the latest on the storm. She forecast that winds of up to 130km would hit with Cork, Kerry Limerick and Clare worst impacted.

"Storm Hannah will push across the country tomorrow evening and tomorrow night," he said.

The first sign of the storm will be rain in the early afternoon that will become widespread as the storm barrels in.

She warned that this would be followed by 'severe and damaging' gusts of storm force winds particularly in coastal parts from Friday evening.

Ms Dillon said the worst of the wind will have passed by midnight but it would remain windy through the night clearing on Saturday which will be cool.

Status Orange and Status Yellow warnings are in place for the storm which was named on Friday.

In a commentary issued on Thursday, Met Éireann said the storm track directly inland across the southern portion of Ireland on Friday evening/night. After that it will move away towards Britain and slowly fill, losing most of its strength on Saturday morning.

Friday morning will be mostly cloudy across the country with patchy outbreaks of rain. During the afternoon a spell of more persistent rain will extend across the country accompanied by strengthening southerly winds. In the evening winds will increase, with severe and damaging gusts developing in the southwest of the country as Storm Hannah approaches. Highest temperatures of 10 to 12 degrees.

NATIONAL OUTLOOK
Early on Friday night it will be very windy or stormy in Munster and Connacht, especially in coastal areas with very strong, gusty west to northwest winds. Strong, gusty northwest winds will extend to all areas later in the night and rain will clear eastwards from most areas. Lowest temperatures of 3 to 6 degrees.

On Saturday morning, rain in the east and northeast will clear and the strong, gusty northwest winds will gradually ease. It will be a cool bright day with sunny spells and scattered showers. Highest temperatures of 9 to 12 degrees.

Sunday will be mild and mostly cloudy with patchy rain or drizzle in many areas. Amounts will be small. Highest temperatures of 12 to 16 degrees with moderate southerly breezes.

On Monday, a band of rain will move eastwards across the country, clearing later with scattered showers following. Highest temperatures of 11 to 14 degrees with moderate southerly winds.

Current indications suggest that Tuesday and Wednesday next will bring sunny spells and scattered showers. Highest temperatures between 13 and 15 degrees with mostly light breezes.