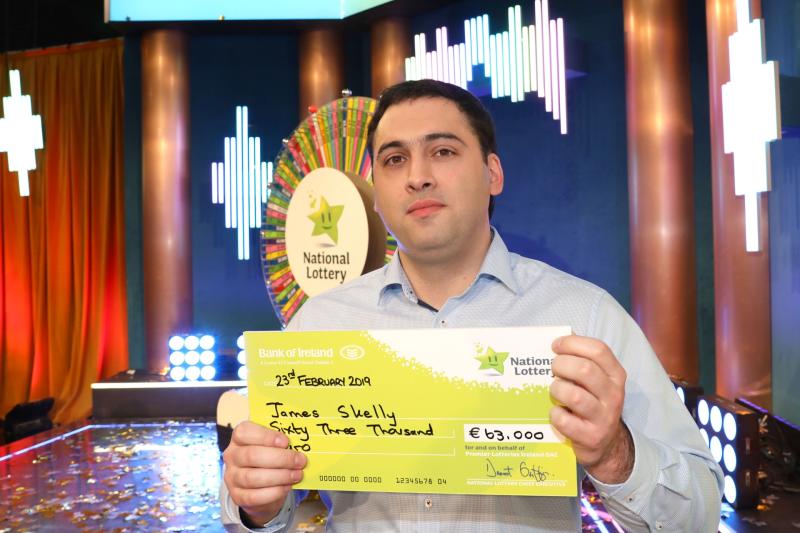 James Skelly from Killashee, but now living in the capital, got his Winning Streak appearance off to a flier after he won an electric car worth €25,000. He went on to win another €8,000 in cash from the show and finished strong as he won €30,000 on the wheel.

James got a call from his uncle Jack last Saturday evening to tell him his name was selected to appear on the game show. James gave a laugh and thought his uncle was playing a practical joke. He hung up the phone and then his dad, Jim, came running into the room roaring and shouting in celebration.

James had bought his Uncle Jack a couple of Winning Streak scratch cards a few weeks ago and with three stars on both. He gave them to James and instructed him to put his name on them and send them into the National Lottery. Fast forward a couple of weeks and those lucky tickets got James on the show and landed him the €63,000 windfall.

James was cheered on by his parents: Jim and Eileen, and his two siblings Treasa and Darragh and other family and friends in the Winning Streak studio.

He completed his Masters recently in Intellectual Property Law from Trinity College and now works in the Law firm Cullen & Co. Solicitors in Dublin.

James hasn’t thought much about what he wants to do with his winnings but he says he will look after his uncle and will put it towards savings for a house of his own.

The National Lottery game show, co-presented by Marty Whelan and Sinead Kennedy, features some perennial favourite games as well but also brand new games including Play or Pay, Roll for Riches, WinFall and Electric Dream – where one player will win an electric car worth €25,000.

A brand new-look Winning Streak scratch card is available in the 5,900 National Lottery retailers all over the country, where as well as the chance to appear on the Winning Streak TV game show if you  get three stars, players will also be in with a chance to win some great cash prizes up to €5,000. The odds for those who purchase a Winning Streak to win is 1 in 1.76 to win a cash or three star prize.

Players can also send their scratch card stubs into the National Lottery where each week, on the show, one lucky player is drawn as the winner of a Luxury Cruise for two valued at €5,000. The winner of this week’s cruise is Adele Lennon from Gorvagh, Co Leitrim.