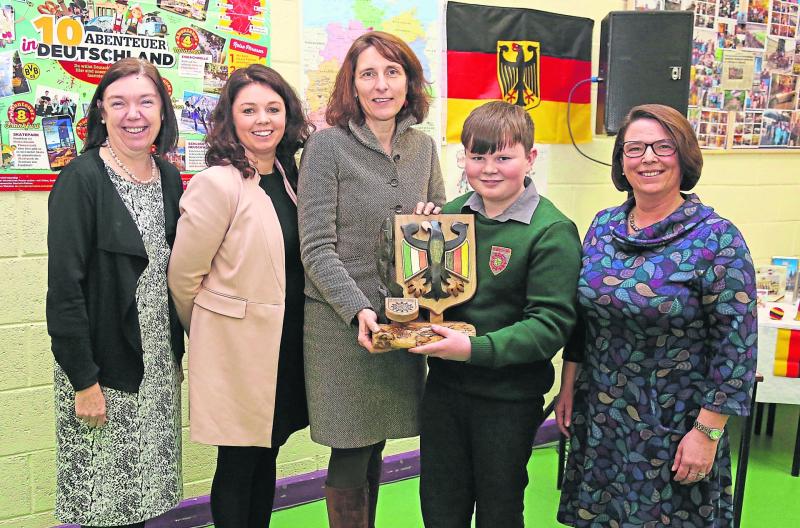 Ms Ailbhe Sheehan, the German teacher, introduced and welcomed Frau Potzel to the school. The school then had a full programme of events for the Ambassador.

The first years spoke in Geman giving the Ambassador an outline of the town, Lanesboro and Ballyleague and the school through a power point presentation. Some students sang, danced and played music, both traditional Irish music and German classical music by Mozart and Beethoven.

The TY students presented projects on various aspects of Germany, including the History of German Football, Festivals in Germany and the German Car Industry.

This was followed by a section of traditional Irish music and dance. Local musicians, Mr Noel Carberry, Mr Fergal McElgunn and Mr Johnny Duffy, whose children, nieces and nephews are past pupils of Lanesboro Community College, entertained the Ambassador with a selection of reels and jigs played on the Uilleann pipes and the guitar.

Some students and Mr McElgunn joined them with the flute, harp and Irish dancing.

The fifth year students spoke about their school tour to Munich and told the Ambassador about some of the places they had visited and the memories they had made while the second year students explained to Frau Potzel all about their experiences of cooking traditional German cookies.

The third years spoke of their experience of language learning in German class and of the importance of young people having an active involvement in politics and keeping themselves informed of current affairs.

The sixth years spoke of their experiences representing Lanesboro Community College in debating competitions and discussed issues such as gender quotas and GMOs. They also performed a short comedy sketch for Frau Potzel.

On behalf of the students and teachers a first year pupil presented the Ambassador with a gift to mark her visit to Lanesboro Community College.

It was a beautiful piece, designed, handmade and crafted by Mr Brian Concannon, our woodwork teacher and painted by our art teacher Ms Michele Spence.

Ms Sheehan explained to the Ambassador the relevance of the piece. It was made from individual pieces of wood- offcuts from our woodwork projects - Irish Oak, Red Deal, Teak, Spalted Beech and also beautiful Bog Oak, sourced locally less than a mile from the school.

The piece included the German Eagle, the German and Irish flags, the crest of Lanesboro Community College with our motto 'Ar agaidh le cheile' and a salmon representing not only the Shannon but also the Salmon of Knowledge, signifying education and the great learning experiences and academic excellence achieved in our school.

The ambassador then addressed the students and spoke about her life growing up in East Berlin before the wall was taken down.

She explained all about her childhood under the Communist Soviet regime and what it was like for her on November 9, 1989, the night the wall came down.

She was a young university student at the time. Frau Potzel also told us all about her life working in the foreign office and her work as an Ambassador.

After lunch the Ambassador was brought on a boat trip leaving from Ballyleague Marina, heading through the cut' and onto Lough Ree.

She spoke of her love of boating and her intention to return to our lovely region.