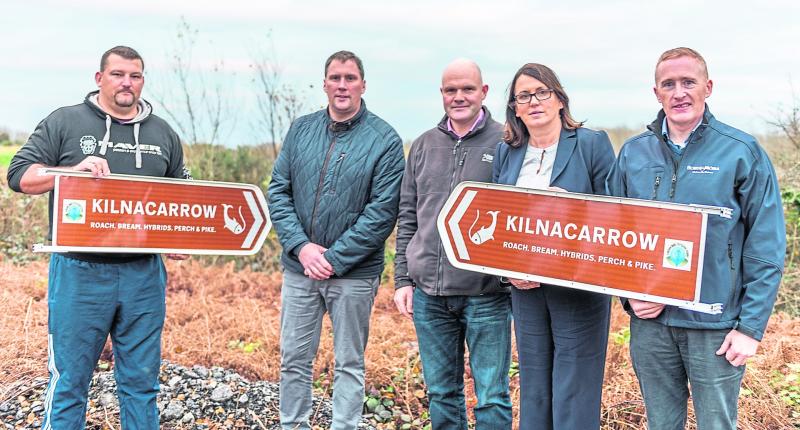 The angling tourism business of Longford and Roscommon has got a major boost with the development of new access facilities to one of Europe's best known fisheries at Kilnacarrow bridge north of Lanesboro and Ballyleague.

For over twenty years the Bord na Móna railway bridge at Kilnacarrow was one of the best known coarse fishery locations in Ireland with consistently high catches of breach, roach, hybrids , perch and pike.

In the 1970's hundreds of anglers from the UK and around Europe flocked to Lanesboro and Ballyleague and the surrounding areas with catches of the highest quantity and quality recorded.

Renowned English angler John Mills was just one of those who travelled to Ireland every year throughout the 1960s and 70s to fish at Kilnacarrow bridge and such were the high quality returns for his fishing adventures there that photographs of his catches dominated the UK angling press and print media - long before the arrival of social media and the internet.

In recent years the deterioration in general fish stock levels and the decline of the quality of the access road to Kilnacarrow bridge led to a decline of angling at this once popular location but in the last six months the Lough Ree Angling Hub has teamed up with Inland Fisheries Ireland with Roscommon County Council and a plethora of agencies and funding groups to extensively renovate the facilities and make them fully accessible again to both locals and visiting anglers.

Working with the local land owners and the local community, the Lough Ree Angling hub submitted an application to the Department of Transport Community Improvement scheme via Roscommon County Council and, with the assistance of the council and local political representatives in the area, approval for the repair of 3kms stretch of the Salmons lane road to Kilnacarrow bridge was granted.

The Angling Hub met last March and in June with local farmers, bog owners and the council and developed the project to be much more extensive than that, however.

The initial work that was carried out included trimming of hedges, recycling as well as the resurfacing of road surfaces and the provision of passing out bays.

The recycling and resurfacing of the road was carried out by Callington Ltd who won the procurement competition for similar roads in the Roscommon Municipal District.

When work started the old Salmon's Lane Road was resurfaced with a layer of double coat surface dressing, consisting of 2 layers of hard wearing limestone chips embedded on 2 coats of bitumen emulsion.

Pass out bays were then constructed at various intervals to allow two vehicles to meet given the narrow nature of the existing road. The location of these bays was determined in conjunction with the local landowners and community representatives.

The Department of Transport committed over €70,000 to complete the project but the total cost of work to be carried out was well in excess of €100,000 - including new access roads, a kissing gate at the river bank and six new brown information signs to direct anglers from the main Scramogue to Ballyleague road to the once popular fishery.

The angling hub held a public meeting of local landowners at St Faithleach's clubhouse and met with several agencies and groups before confirming support for the project from the Sliabh Bawn Wind Farm Community fund, Bord na Móna, ESB and local landowners.

The project was completed just before Christmas with new signage going up - thanks to the support of Roscommon County Council Community Enhancement funding and the local Municipal area staff.

"The access road to the angling at Kilnacarrow Bridge is now on par with anything in Europe" the chairman of the Lough Ree Angling Hub, Andy Burnett said. Mr Burnett added, "Anglers can now safely drive their vehicles to the end of the 4kms road and take the route onwards to the fishing by foot and we would like to extend sincere thanks to all local landowners and the agencies who helped us to achieve this.

“We have met again with landowners and the IFI in recent months and now hope to proceed with plans to extend the area for fishing along the Shannon so that more and more anglers can come back to the area and fish here with the obvious economic boost for the local community."

The fishery at Kilnacarrow will now be available for two major International competitions in 2019 when a prize fund of over €3,000 will be available - thanks to the support of Roscommon Tourism.

The Lough Ree Angling Hub wish to thank John Devanney, Oisin Naughton and Suzanne Campion of Inland Fisheries Ireland and Eugene Dwyer and John Mockler of Roscommon County Council for their help and advice with this project which is ongoing and the betterment of angling facilities.

The road improvements at Salmons Lane has also led to an increase in the number of pedestrians and cyclists visiting this area of natural beauty.

In the last 12 months Ballyleague Tidy Towns worked with the County Council to help clear rubbish and litter from the roadway and the drains and an appeal has been made to all who use the roadway not to litter it in the coming year.

CCTV cameras have now been installed to record all car registration numbers when there is littering in the area.

The Angling Hub has asked all visitors to respect the new roadway and all local property.