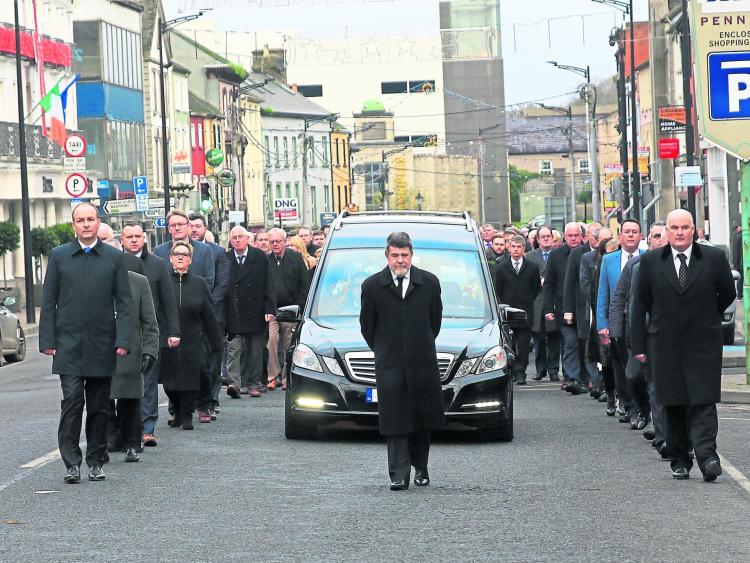 Many characterisations and tributes to the legacy left by the late Peter Kelly have already been well borne out.

Yet, one correlated accolade undoubtedly stands head and shoulders above all others.

A deeply devoted family man, who extolled the virtues of benevolence and common decency to unparalleled lengths, the former Fianna Fáíl TD will forever be remembered as a man who put his county and its inhabitants first.

ALSO READ: Former Fianna Fáil TD, Peter Kelly who has passed away described as 'a colossus of Longford life'

One of those who could attest to that distinction was his long time foot soldier, employee and political protege, Tony Flaherty.

A former member of the then Longford Town Council himself, Mr Flaherty first rubbed shoulders with his long time mentor after landing a job in his early teens collecting glasses in Mr Kelly’s pub on Longford’s Main Street.

“He was the reason why I got into politics,” said a sombre sounding Mr Flaherty, as he reflected on the father of three’s untimely passing last week.

“He took me to my first Fianna Fáil meeting in 1991 and helped me from the very start. Peter had a huge influence on me and was a true father to me politically.”

The bond between the pair blossomed both personally and professionally, so much so that within a short space of time, Mr Flaherty was immersed in the family undertaking, pub and off licence businesses.

He credited a large slice of his own election in 1994 to the part played by Mr Kelly and the know how passed on by the genial publican.

And it was during that time Mr Flaherty got to witness up close the finer workings of a politician he would quickly look up to and admire.

“One thing about Peter Kelly was he always put Longford and its people first,” he said. “Everywhere and anywhere we went he would always introduce himself as Peter Kelly, Longford, Ireland.

“He was so proud of Longford and its people.

“I will always remember in the run up to the Town Council elections in 1994 and 1999 when he would canvass in my home areas, he only always asked for the number two vote from people.

“He never asked people to give him their number ones, that was the mark of the man.”

One of his lasting contributions, Mr Flaherty recalled was the construction of the Mall swimming pool, a project he maintained was “single handedly” delivered by his long time friend and political running mate.

The events of the past week and suddenness of Mr Kelly’s passing have not surprisingly hit him hard.

“To be honest, it's like a family member having passed. I knew him for 24 years and there was never a cross word between us.”

The pair worked closely together, albeit in contrasting hardware firms, at a time when Ireland’s economic fortunes were a far cry from the opulences of today.

“I'd have known Peter for yonks. He was a great friend, like he was to a lot of people,” he said.

“I wouldn't have been involved in any committees with him or anything like that, it was purely socially and as a business friend.

“We were both in the hardware business and would have consulted with each other a lot at the time.”

Just like business, politics was the Longford native’s undeniable labour of love.

“I would have known the man and the boy,” confided the Aughnacliffe man.

“I knew Peter all my life and he was larger than life.”

By his own admission, Mr Reid said any predetermined misconceptions over the Kelly voting machine were swiftly extinguished.

“Some people, including myself, took him lightly in the beginning but I can say this much, spending a day canvassing with Peter Kelly as I ended up doing around Aughnacliffe and other places in Dromard and townlands down there, everywhere you went Peter Kelly was scooping up votes on the strength of his own charity and his father's charity.

“House after house, you would hear stories about bodies being repatriated from the UK and deeds of very substantial charity. One man actually said to me on one occasion: 'Oh, I have to vote for Kelly, he brought my son home from Birmingham and he wasn't paid for five years.'”

On another occasion, Mr Reid called to mind seeing the good natured local politician come to the aid of a widow in “straitened circumstances” at a graveside by discreetly slipping a €50 note into her jacket pocket.

“Peter Kelly was an unusual politician in that he took life lightly, but he took the hard knocks out of other people's lives seriously.

“He wouldn't have been that much into Brexit if there wasn't bread on the table and was just a great friend of poor people.”

Other long term political allies and incumbent county councillors naturally have their own enduring memories of the irrepressible Fianna Fáil stalwart.

Fine Gael’s Micheál Carrigy described him as a “fine, decent and honourable family man” who worked tirelessly for the good of Longford and its wider populous.

Like Tony Flaherty, Cllr Mae Sexton served alongside Mr Kelly on the former Longford Town Council as well as its countywide equivalent in 1991.

The pair would later rejoice in unison when both were elected to the Dáil following the 2002 general election.

“I can truly say that Peter always had the interest of Longford first and foremost in his role as a dedicated and committed public representative,” said Cllr Sexton.

“I remember well him stating in an interview that he was so proud to be a ‘messenger of the people’ and his heart and soul was Longford.

“He was a very witty, funny man and a dedicated family man.”

They were sentiments another of his seasoned Fianna Fáil party colleagues attested to.

Cllr PJ Reilly said he first crossed paths with the impressionable future TD during his adolescent years going in and out of Longford town.

“I first got to know him when I used to go into Longford with my parents, we would break up and the meeting place would nearly always have been Kelly's shop,” he said.

“That's when I got to know the young Peter.

“I canvassed with him in 2002 when he was successful in getting elected to the Dáil and we worked together for the following nine years until he lost his seat in 2011.”

Gains made by various local groups in the Granard, Abbeylara and wider north Longford areas as a consequence of Mr Kelly’s involvement as a government TD were particular highlights for Cllr Reilly.

“The homeless person was the same to Peter as the millionaire,” he said, as he told of Mr Kelly’s penchant to break into song.

“We often travelled to different conferences all over Ireland and he really was the life and soul of the party, especially if there was a sing song in the bar.

“Elvis Presley wouldn’t hold a candle to Peter. He was great company to be with, a true gent and a real friend.”

And just like the world of rock music still eulogises over its own ‘king’ more than 40 years on, you get the feeling Longford and its 40,000 plus citizens will continue to do likewise in upholding the merits and virtues of the late, great, inimitable Peter Kelly.