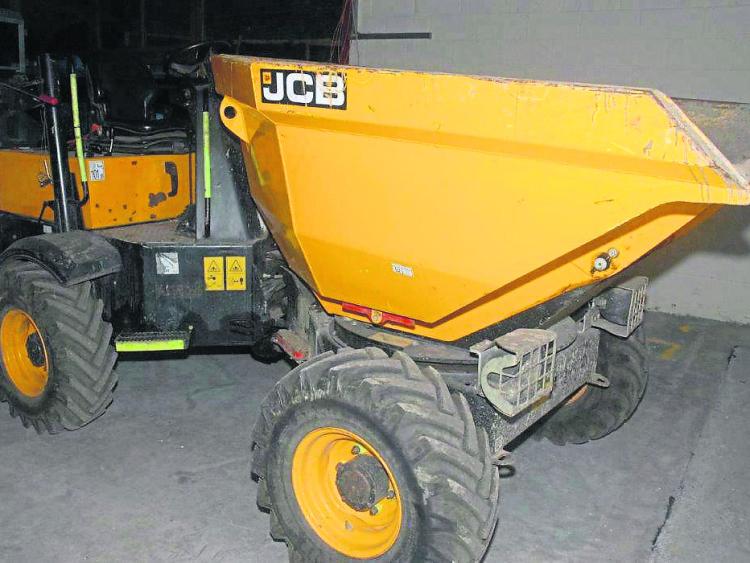 Some of the stolen property that was recovered by Gardaí recently.

Senior garda chiefs believe the recent discoveries of over €500,000 in suspected stolen industrial and plant machinery following two separate raids in Co Longford is one which carries not just domestic, but also cross border and international dimensions.

Diggers, dump trucks and trailers, together with a stream of construction related items are currently being analysed by forensic specialists after seizures in Edgeworthstown and, more recently, Shroid last Wednesday evening.

And though both investigations, which garda chiefs are linking to the workings of a sophisticated organised crime gang, remain at an early stage its anticipated the total haul seized could reach the €650,000 mark.

One of those heading up those inquiries is Supt Brian Mohan.

The Granard based garda boss admitted that, while the events of the past two weeks have provided positive results from an anti-crime perspective, both episodes have thrown the spotlight on an industry law enforcement agencies are finding increasingly difficult to nullify.

“I wouldn't say it's becoming more and more prevalent as it has always been there but it's certainly one of those crimes that is difficult to combat because the majority of the vehicles which are involved in this type of activity are ones that you don't see on the road.

“Whereas with other cases you have the likes of various registration documents which can be used to identify and solve vehicle theft, more often than not this type of equipment are found in non public areas and taken from construction sites which makes it more difficult for us to detect and keep a handle on.”

One possible solution gardaí routinely ask the owners of such types of machinery to carry out is to mark or otherwise inscribe their respective property in order to make it easier to identify in the event of its theft.

Supt Mohan revealed there was nothing accidental about both seizures over the past few days, but rather a follow on from a locally devised investigation, codenamed Operation Butler.

Those efforts, first kick-started two years ago, specifically aimed against a criminal gang suspected of stealing vans in the UK and selling them in Ireland, uncovered 13 Ford Transit vans and one caravan following searches in Longford, Cavan and South Dublin.

“This is not just happening in Longford, this is all over,” he said.

“There has to be a lot of logistics involved in moving plant machinery from a building site in London to a site in Granard.”

His opposite number in Longford, Supt Jim Delaney agreed.

“It would take a certain amount of organisation to be able to provide the logistics to first of all steal the machinery, to transport the machinery and to then store the machinery,” he said. “This is not an opportunistic theft and there is obviously a market for this type of thing.”

He, together with his colleagues in Granard, have been liaising closely with London’s Metropolitan Police, the UK’s National Crime Agency (NCA) and various manufacturing companies to determine both the origins of those items seized and the possible orchestrators behind their theft and conveyance to Irish shores.

“Our investigations are still at a very early stage but we are satisfied that from our inquiries to date that the property detected is stolen,” he said, as he turned his focus to the various knock-on effects such crime can inflict on communities both locally and further afield.

“For small businesses that may be targeted by this type of activity, it can often be the straw that breaks the camel's back,” he said.

“We have to think of the victims in all of this, not just the owners of this type of equipment but the people who depend on it for their employment and for those people who rely on these type of companies to stay viable to protect their jobs.”

For others, the growing spectre of large scale plant and machinery theft has re-opened calls for key law enforcement agencies this side of the Irish Sea to take a more hard-line approach against organised crime gangs.

“The criminal activity of this small minority has been casting a black cloud over Longford for too many years now,” said Cllr Gerry Warnock, chairperson of Co Longford’s Joint Policing Committee.

“There are people that are sauntering around with the trappings of wealth but who don’t appear to have any immediately identifiable sources of income to back that up.

“It has worked in the past when they (CAB) followed the money which produced positive results and we will certainly be encouraging the CAB to step up their activities in trying to close the net on these people.”