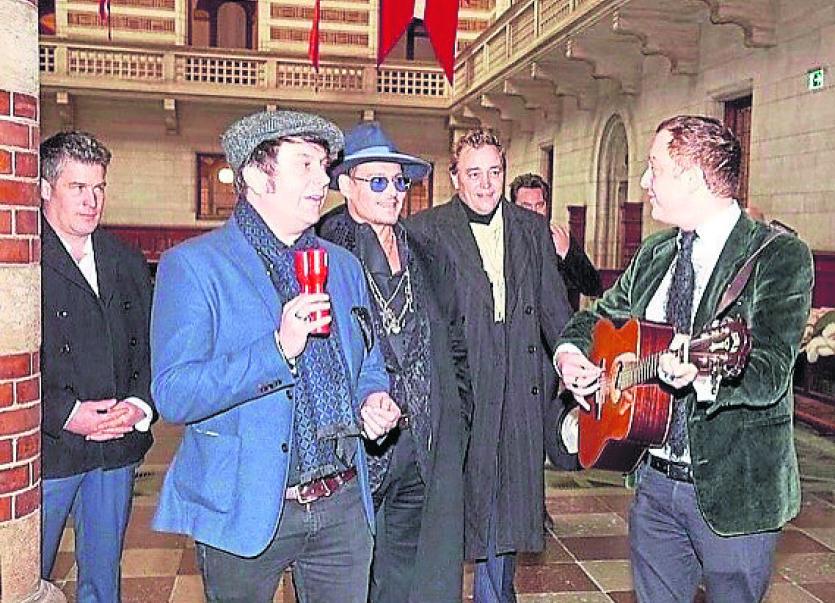 Longford band Cronin were honoured to play the wedding of Shane MacGowan and Victoria Mary Clarke in an intimate ceremony in Copenhagen at the end of November.

They were joined by celebrity A-lister and Hollywood stalwart Johnny Depp at Copenhagen City Hall where the happy couple tied the knot at midday.

Johnny and Mick Cronin sang the Pogues hit, 'Rainy Night in Soho' in front of a small gathering of friends and family, when Depp walked in.

“It was magical, Johnny (Depp) just appeared as I was singing the line 'We watched our friends grow up together' and he joined in to finish the song,” explains Johnny Cronin.

Mick Cronin, who earlier this year joined an all star band to celebrate MacGowan's 60th birthday in the National Concert Hall in Dublin, said:

“It was great to see and play with Johnny (Depp) again after all these months. It was really special to be part of Shane and Victoria's beautiful day.”

Johnny Depp, who has visited Mullingar on several occasions, talked about JP Donleavy, James Joyce's time spent there, and music.

“I told him the story of the Children of Lir and Lough Derraverragh. We talked music and films. We got to jam together,” added Johnny Cronin.

Speaking to Ryan Tubridy on Tuesday, Victoria Mary Clarke revealed how Depp and Cronin planned to do a repeat performance of 'Rainy Night in Soho' at the meal, but Shane stopped them and they did 'Astral Weeks' instead, one of the happy couple's favourite songs, and Shane joined in.

“Do you know the Cronins from Mullingar?' she asked Tubridy.

“They played a lot with Johnny (Depp), so they all (Shane MacGowan) play together a lot, they were really great,” continued Victoria.

“It was actually so beautiful. I couldn't have imagined it being more beautiful,” Victoria told Tubridy, adding that the reason they chose Copenhagen as their wedding destination is because she loves the city.

“I just really like it there, it's a beautiful city in the winter. They've got this thing called the Tivoli Gardens, which was like a magic funfair, one of the oldest funfairs in the world, full of Christmas trees, snowmen and snow, it's really pretty.”

Cronin release new single 'The First Kiss of Love/The Power of Love' this Friday, December 7, and have a number of dates across Ireland, the UK and Holland.

Irish dates include a gig in the Village Inn, Drumlish on St Stephen's Night - Wednesday, December 26.

On Saturday, December 29, the band will play the Stables at Smiddy's in Mullingar, Co Westmeath.

And they'll head west on New Year's Eve for a performance in Monroe's Live, Galway on Monday, December 31.