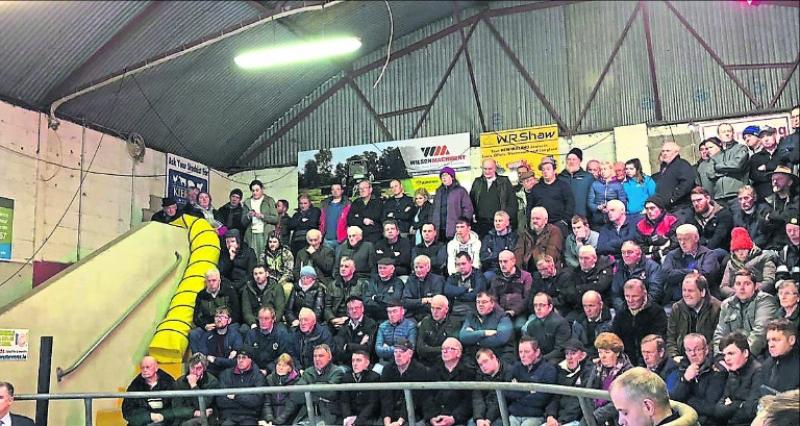 A section of the large attendance in Granard Farmers Mart on Tuesday, November 27 for the Protecting Livelihoods event, organised by Granard Mart, Axa Insurance, Kiernan Milling and Paul Belton Agricu

Dublin footballer Kevin McManamon spoke about mental health and the importance of becoming aware of the ‘inner voice’ during an interesting discussion on the topic at last week’s ‘Protecting Livelihoods’ meeting in Granard Mart.

McManamon who made his debut with Dublin in 2010 said that when he first came onto the panel he played well for the first six months of the year in the League and then things started to unravel. “All I ever wanted in sport was just one championship cap and basically what happened to me was when I went out to play, I froze,” he said.

“There was 50,000 people there; I didn’t know what was going on, I didn’t sleep for two or three days before the game, I was really tense and full of fear within myself.”

The footballer went on to say that when he got his place in the game against Wexford he had about four turnovers in the first half and only had possession of the ball about six times.

McManamon told those gathered in Granard last week that the following season went bad for him as well and it was at that point that he knew something was wrong within himself.

“We have all been there - whether its learning to drive or just stepping out of your comfort zone - anything that’s a bit new, a bit dangerous or a bit scary often brings on that bit of anxiety,” he continued.

Meanwhile, in January 2012, he came back fighting fit for the League and ended up being the top scorer in the competition that year.

But as soon as the Championship started the self doubt and anxiety reared its head.

He says too that he was being “too hard” on himself.

It was then that he realised, “this shit going on in my head is stopping me from achieving what I want to achieve”.

He also indicated that up to that point he had never told anyone about how he was continuously doubting himself.

He said he had a ‘tough as nails’ persona on the exterior, and didn’t want to show any weakness to anyone.

He met with the team psychologist and after chatting with her for a couple of hours in a hotel in Maynooth, McManamon began to unravel the mayhem within.

“I have had a little bit of mental health journey out of all of this,” he added before pointing out that these days he is at a much different level of self confidence, self belief and resilience.

“What is it that we all do for our head?,” he asked those gathered.

“Feed yourself the good stuff and become more aware of the messages you are sending yourselves,” he added.

“Fear, particularly where there is stress involved it can all get a bit messy.
“Anytime the stress comes in we are more likely to become negative.”

“The inner critique, we all have it and relates to taking notice - the stuff that chips away at our confidence,” he continued.
“I looked at all the people I looked up to people like Roy Keane and Michael Jordan - people who were really hard on themselves.

“But whatever happened to me when I started playing with Dublin, I never once gave myself credit for what was going well.
“I never one said, ‘you know what Kev, fair play to you, you did well this morning, that was great’.

“I was disqualifying the positives all the time and that is something that we all need to watch out for.
“The message I was left with was ‘feed yourself the good stuff'."