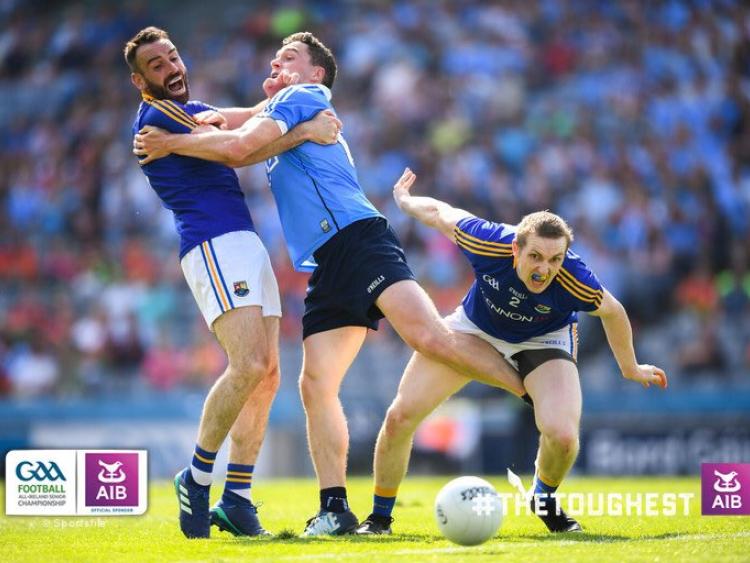 The Dublin juggernaut marched on convincingly to yet another Leinster Senior Football Championship Final after they crushed Longford by 19 points, 0-12 to 2-25, at Croke Park today.

Denis Connerton’s Longford trailed by 12 points at half time, 0-7 to 2-13, and their mission was made even more impossible following the 21st minute red card shown to James McGivney.

Longford’s 14-men battled gutsily in the second half but it just wasn’t to be and they will be in the qualifier draw in the morning.

Connerton told RTE Sport that Longford needed any bit of luck going on the day and that they didn't get it. He said he was very proud of how his players performed and that they are tired following their exertions against Dublin, what he termed the 'Real Madrid' of gaelic football.

Paddy Collum produced some good saves but Dublin were peerless, notching up 2-20 from play, 2-25 in all.

Eleven Dublin players got on the scoresheet, with Brian Fenton, Ciaran Kilkenny and Dean Rock leading their charge. Fenton, indeed, hasn’t lost a championship game since he made his debut and he scored four super points from midfield.

The strength in depth which the reigning Leinster and All-Ireland kingpins possess is incredible and they sprung an array of riches from the bench and Laois are going to find it extremely difficult against them in the provincial final.

Rian Brady’s 54th minute point, made it 0-12 to 2-16, but the Dubs, with fresh legs from the bench and players keen to made a huge impression, scored nine unanswered points before the shrill of the final whistle.

The Action
The Dubs were swiftly out of the traps with Philly McMahon, Con O’Callaghan and Ciaran Kilkenny landing points into the Hill 16 end by the third minute.

Two fine points from Robbie Smyth and Michael Quinn saw Longford settle into the game, however, Paddy Andrews quickly replied for Jim Gavin’s side, 0-4 to 0-2.

Longford captain Donal McElligott surged forward from centre back to hoist over his team’s third point, 0-4 to 0-3.

Points from Dean Rock (2 - play and a free), Brian Fenton and Brian Howard helped Dublin extend their lead to five points, 0-8 to 0-3 after 14 minutes.

Rock and Smyth traded converted frees before Longford were hit with an absolute sucker blow in the 18th minute as Rock fisted the ball beyond Paddy Collum after Michael Darragh Mcauley’s surging run, 1-8 to 0-4.

Things went from bad to worse for Longford as James McGivney was shown a straight red card in the 21st minute for a late tackle on Dublin ‘keeper Stephen Cluxton.

Dublin’s Jonny Cooper, already on a yellow card, was rather fortunate to escape picking up a second yellow for a reckless and high 29th minute tackle on Dessie Reynolds. Robbie Smyth converted the free, 2-10 to 0-5. Smyth landed a sublime point from play but Dublin hit back through James McCarthy and Brian Fenton.

In first half added time, Longford ‘keeper Paddy Collum landed a ‘45 and Mannion fisted a point at the opposite end in the 39th minute, to leave the interval scoreline reading: Dublin 2-13 Longford 0-7.

The Dublin management withdrew two defenders during the break. Michael Fitzsimons, who was been seriously tested by Robbie Smyth, made way for Darren Daly, while Jack McCaffrey, back from a cruciate ligament injury replaced Jonny Cooper, who was walking a disciplinary tightrope.

Smyth and Rock swapped converted frees, before Dessie Reynolds’ grabbed a fine individual point, 2-14 to 0-9. ‘Hawkeye’ ruled out a 42nd minute Darren Gallagher point that was awarded by the umpires and David McGivney suffered a similar fate with a free. McGivney (free) did land Longford’s 10th point in the 49th minute, 2-14 to 0-10.

Dublin sub Colm Basquel scored two points which were responded to by Sean McCormack and Rian Brady, 2-16 to 0-12 after 54 minutes. Longford lost Michael Quinn to a black card and he was replaced by Barry Gilleran and the Dubs reeled off four points on-the-trot through Rock (three frees) and Kilkenny, 2-20 to 0-12.

They added five more points before the end through Kilkenny (2) - one following yet another Collum save, Brian Fenton (2) and Niall Scully.

Up for the match, come on Longford! #Fanwall pic.twitter.com/9aPpd8iyLu

Great day for a clash with the Dubs! Hon Longford! #DUBvLONG pic.twitter.com/6kfd69rZrM