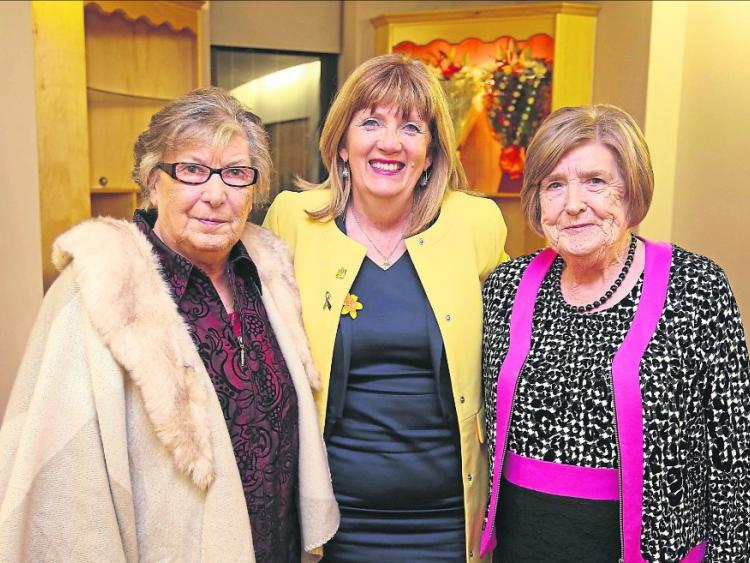 Marie Hand and Veronica Naughten have been described as two staunch Longford women whose voluntary efforts for the Irish Cancer Society has enabled them to raise over €300,000 during the past 30 years.

During the ceremony to mark the women’s massive contribution to Longford life, Cllr Peggy Nolan said there was not a family among those gathered that had not been touched by cancer.

“It is a horrible, horrible disease and you know when times were bad and families needed those women they were the rainbow in a very dark sky,” she added.

“These two wonderful ladies are retiring now and so it falls upon the next generation to pick up from where they have left off.”

Cllr Nolan went on to say that the event was a night of celebration, not just of community spirit, but of two women who were the gel that kept us all together.

“Veronica and Marie epitomise what Longford is all about,” the local area representative in the county town continued.

“We know, in this county, how to fundraise and how to look after people in need.

“That is what these women have done; nobody would pass Veronica or Marie - you would give them your last cent.”

“Veronica Naughten and Marie Hand have - for over 30 years now - worked tirelessly for the Irish Cancer Society,” he added.
“Over that period they have raised an incredible €333,000.

“That money has stayed in the county, has been spent within it and has eased the lives of so many people.”

Cllr Butler continued, “There is nobody in Longford who is not touched one way or another by cancer and these two women, after 30 years now, are stepping down and handing over the reigns to the next generation”.

The local Cathaoirleach also pointed to the fact that the Municipal District felt that Marie and Veronica deserved to be honoured for the wonderful work they have done over the years.

“Volunteers just like these women are the glue in our society,” added Cllr Butler.

“And if people don’t volunteer and do these things our society is much poorer for it.

“These two women are a shining example to the next generation to get involved in volunteering and with charitable work.

“Theirs is an exceptional story and we are all very proud of them.”