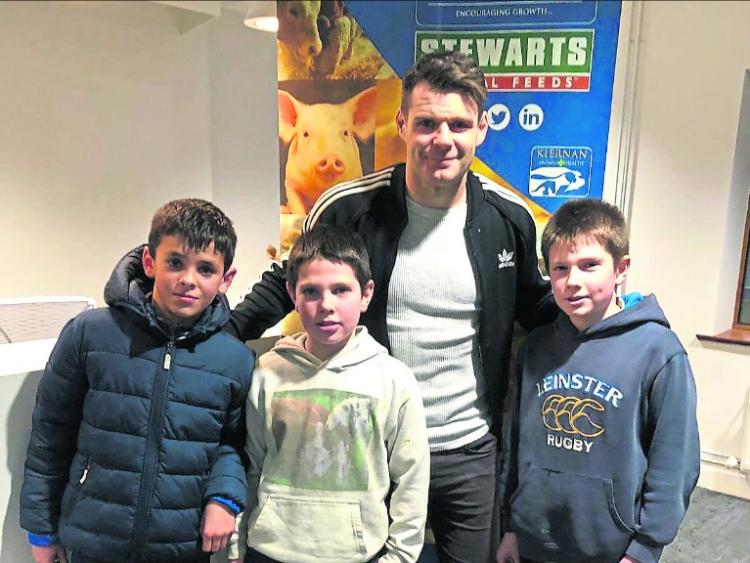 While, Dublin footballer Kevin McManamon (32) who plays for St Judes, was at the ‘Protecting Livelihoods’ meeting in Granard Mart to chat about mental health, the only thing on the locals minds when he entered the ring was the tips he could offer Mullinalaghta, St Columba’s in the side’s historic encounter with Kilmacud Crokes in the Leinster Club Final next Sunday.

McManamon made his senior debut in the O'Byrne Cup against Wexford in 2010 and also has a background in sports psychology.

“This is the first mart I have ever been in,” joked the footballer before pointing out that he knew very few farmers and would just speak about the topic of mental health from his own perspective.

With regards to the tips for Sunday next, the Dublin man said he had the experience himself of playing against Kilmacud in a Dublin final.

“I do have a few tips actually,” he laughed before asking if there were any Mullinalaghta players or mentors in the crowd.
Needless to say his question was rewarded with the sounds of rapturous cheering!

“I’ve only heard that Kilmacud have like 5,000 members and you guys have 200 or something like that,” smiled McManamon.
“What I would do is keep it tight at the back; prevent Kilmacud from creating goal chances.

“I’d get your biggest, fastest and toughest warrior to put his hand around Paul Mannion’s waist and don’t let go for 60 minutes.

“He scored 1-06 against us in the county final.

Meanwhile, the high achieving Dublin footballer told those gathered that he worked with people who were high performers including athletes, coaches, musicians, actors and business people.

“Basically anyone with high stress levels, and the idea is to build confidence and provide skills to help deal with pressure and stress in our lives,” he continued.

“Dealing with stress is all about what works for you; for me, it was watching that voice in my head that was always giving out to me.

“I had to start giving myself more credit.”

He went on to say that he had to watch the “unrealistic expectations” he was setting for himself and that applies to a lot of people in their everyday lives.

“It’s important to be active as well - exercise eases the burden of stress,” McManamon continued, before pointing out that connecting with other people was also very important.

“Don’t be afraid to have the conversation when you are stressed.

“There are all these rules for being a man; you are not allowed to show any weakness or vulnerability; you are not supposed to show any emotion etc, and so the whole idea then is that you have to take everything on your own shoulders.

“In fact we all have this armour that we wear; we need to be tough as nails.

For stress one of the biggest reliefs is to learn when to take that armour off.”