Longford's first citizen says: 'Time is right for me to go' 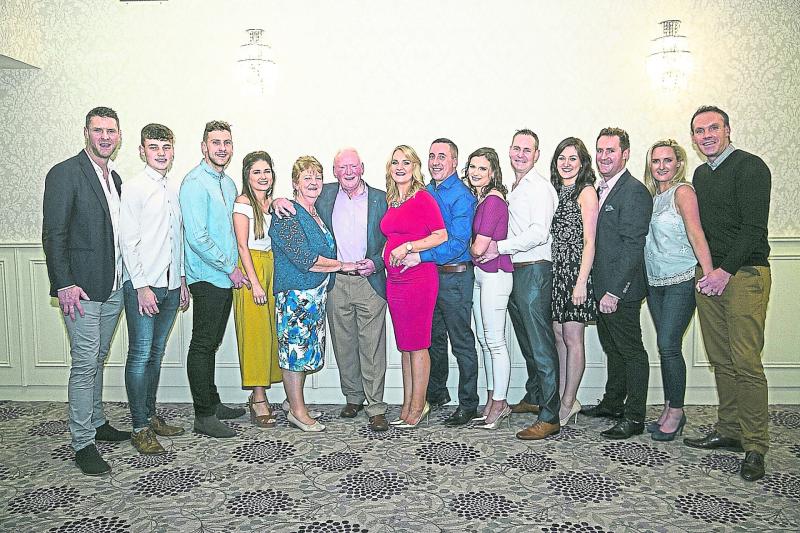 If you are looking for one of life's true gentlemen look no further than Luie McEntire.

The county's first citizen, or incumbent Cathaoirleach of Longford County Council to give the genial father of six his proper title, has revealed his intention to stand down at next year's local elections.

In doing so, Cllr McEntire, more fondly referred to as simply Luie by those who know and revere him best, will bring the curtain down on a flawless 40 year political career.

It's also one of the reasons why the name McEntire commands almost instant respect and admiration not just among the rolling hills of north Longford, but countywide and beyond.

Put simply, the man is a colossus in the arena of local politics, a repute which was not built up purely through longevity or political endurance.
Rather, it's been the Dromard native's inimitable down to earth persona and unique ability to engender reverance from across the political divide which has set him apart as arguably the finest local politician of his generation.

Why then, one may ask, is the county's longest serving county councillor willing to break the habit of almost half a lifetime and step away from a profession he has lived and breathed for the past four decades?
The answer is as lucid as it is predictable.

“I feel that it's just time,” said Luie, with a philosophical sharp intake of breath.

“I have a great interest in farming and I would like to spend more time at it.

“I also have seven grandchildren, that I don't spend enough time with and a wife and family.”

With living along the shores of Lough Annagh, comes another reason behind the Cathaoirleach's impending departure.

“I love to go out on the boat too and spend time on the lake,” he said, while alluding to a recent purchase he made from Mountnugent based firm, Sheelin Boats.

As is routinely the case when such a household name indicates their desire to retire, a member of that person's immediate family ordinarily steps forward to step into the breach.

On this occasion, however, it's a luxury that's not at the behest of the long serving Fianna Fáíl stalwart.

“I have five sons who are all working in Dublin and one daughter,” Luie proudly added.

“The assumption of the Fianna Fáíl party was that Louise (daughter) would consider running but due to family circumstances and three children under the age of six, the timing, at present isn't right.”

It's a dilemma you get the distinct impression he has toiled over for some time.

But like the consummate, but shrewd politician he has become renowned for over the years, it's a position that's not entirely set in stone either.

“Louise, for 20 years, has been my campaign manager and is heavily involved with the Fianna Fáíl party at both Cumann and Comhairle Ceantair level.

“She also has a great interest in Fianna Fáíl and politics in general, but at the moment the time is just not right, though who knows what the future holds?” Luie remarked.

Filling the shoes vacated by one of the country's longest serving local representatives will certainly be no easy task, whoever happens to put their name forward.

And, in typical McEntire fashion, the man still holding onto that seat is giving precious little away as to who that figure may be.

“I feel the time is right now for some young, passionate, hard-working, innovative candidate with new ideas to be given an opportunity,” noted Luie.

“In saying that, we (Fianna Fáíl) need to have somebody who is well known throughout the entire Granard electoral area.

“Now, that it has also gone from a six to a five seater means it will leave it a bit harder to get elected, and my biggest concern is that we hold onto the two Fianna Fáil seats in the area.”

The mention of retaining the party's two seat stranglehold is a challenge made all the more taxing given the well documented decision of his long time running mate and close acquaintance, Cllr Martin Mulleady to also depart from the local authority stage next May.

The close professional and personal affiliation between the pair is well known and frequently evidenced with an often impromptu set of tongue-in-cheek jibes that are traded at monthly council meetings.

Joking aside, there's no denying the sense of mutual respect both share for one another.

“I succeeded Frank Mulleady in 1979, who had served for 27 years,” reflected Luie, who revealed the combined level of service between both families stood at an impressive 67 years.

During that period, Luie contested and emerged victorious in no fewer than eight local elections, topping the poll on more than one occasion along the way.

Having rubbed shoulders with his grandfather and given the inexorable ties that exist between both families, it was hardly surprising to find Luie's predecessor as Cathaoirleach on the end of the telephone line this week when news of his looming retirement was confirmed.

“Luie has been an absolute pleasure to work with,” said Cllr Mulleady.

“He has been a close family friend for many, many years and even though we tried to stop him coming into Drumlish over the years because he was getting too many votes, he was always there to listen and give advice.

“One thing is for sure, you won't see the likes of Luie McEntire again.

Some people might think it (being a county councillor) is an easy job.Anyone who thinks that may think again because it's far from easy.

“Luie McEntire has given tremendous service to the people of north Longford and I, for one, wish him the very best of health and happiness into the future.”

Service and serving the people he has represented over the past 40 years has always been Luie's political bread and butter.

It's a mindest which has served him well over the years too, most notably with the umpteen committee roles and chairmanships he has notched up in that time.

They include spells on the Oireachtas' Prison's Visiting Committee for St Patrick's, Drumcondra and Castlerea, roles which were in part influenced by his close connections to the late Taoiseach Albert Reynolds.

Others worthy of mention include stints on the local authority's agricultural committee, VEC, Association of Libraries of Ireland and Directorship on the board of Irish Public Bodies.

The latter was a position he held down for 20 years, travelling the length and breadth of the country throughout much of it.

What's more, he still sits as member on the governing body of UCD and remains a serving member as well as the present chairman of Moyne Community School's Board of Management.

Arguably his biggest achievements carry a more recent relevance, typified by his elevation to Council Cathaoirleach for a second time and his election to the presidency of the Association of Irish Local Government (AILG) in September.

Even with such an illustrious list of accolades and titles behind him, there's one overriding burning ambition which has superseded all of those over the past four decades.

“I have had many highlights,” added Luie.

“Working with Albert when he got elected as Taoiseach and doing much the same alongside Peter Kelly when he was a TD are a couple.

“Then there was all the elections I was successful in over the years, thanks to the great team of workers who were there with me every step of the way.

“But it was the recognition of the people I represented in my area which always came first.

“Sure, without that I would be nowhere and wouldn't have got elected all of those times.

“Representing the people of my local area was, and still is, my top priority.”

Despite being in the final embers of that undertaking, he vowed to continue to work diligently for Fianna Fáíl at the next local and general elections “to make sure (Longford Fianna Fáíl candidate) Joe Flaherty is elected”.

And, as for how his number one supporter, confidante and beloved wife, Margaret will take to seeing a lot more of her husband from next May onwards, Luie admits even he remains in the dark on that score.
“It's hard to know,” he chuckled aloud.

“You can get under women's feet you know.

“Sure, I suppose the jury's still out on that one.”

One thing the jury is very much agreed on however, is the indellible impact this amiable, captivating and immensely popular character has left on Longford's local political landscape, a lanscape which will be all the poorer for his departure next May.