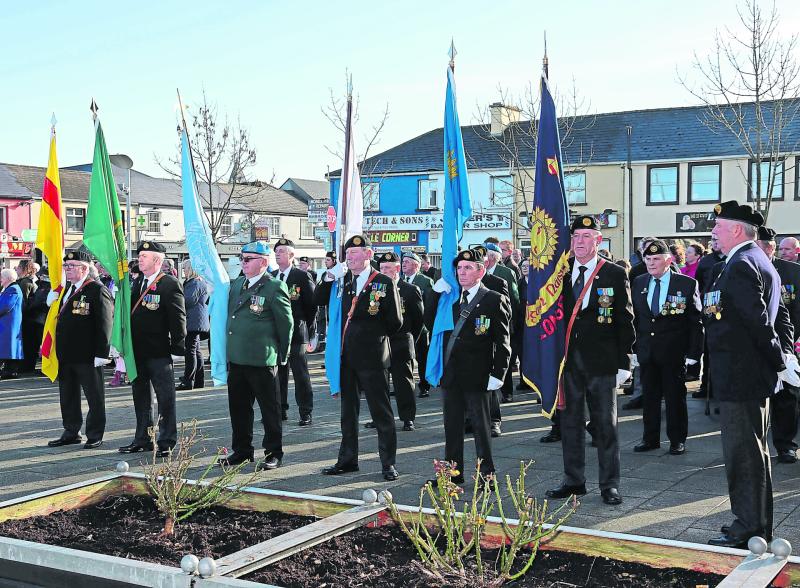 Members of the Peter Keenan ONE branch who were instrumental in organising the commemoration.

On Sunday last Longford commemorated the 280 or so local men who died in World War I.

The annual Remembrance Sunday ceremony was held on the Market Square, which is organised jointly by the Peter Keenan Branch of ONE and Longford County Council.

This was subsequently followed by a parade to St Mel’s Cathedral for a special Remembrance Mass at 11.30am and an exhibition on the History of World War I went on to draw large crowds throughout the day at the Temperance Hall.

Speaking to the Leader on Sunday, Longford Heritage Officer Mairéad Ni Chonghaile and county archivist Martin Morris discussed the impact the loss of life had on the people of the county at the time and the efforts that were made here to help the men at The Front.

The Leader also learned that at least three quarters of the World War I personnel records were destroyed in The Blitz during Nazi Germany's sustained aerial bombing campaign against Britain in World War II.

“The reason we have the information that we do have is because people actually went out during a bombing raid and gathered up as much of the paper as they could,” said Ms Ní Chonghaile.

“Now when you look at some of those records you can see the burnt edges and water marks from trying to put the fires out; so we are lucky really that we know what we do know.”

The core information that Co Longford has on its dead came from a list generated by the Commonwealth War Graves Commission in the 1920s which then formed the basis of the Irish Memorial Roles.

It listed the names of the dead, their regiment and where possible their place of birth.

“In Longford terms, probably the best we can say at the moment is that we had over 300 deaths,” pointed out Mr Morris.

“The vast majority of those served in the British Forces, while there were very small numbers serving in the Commonwealth countries like Canada, New Zealand and South Africa.

“In some cases there just isn’t enough clarity; the tightest count we can do would put the number in the British Forces at a little over 280.

“The War Memorial on the Market Square says 284; if you take that as about 13% or 14% of the total number of Longford men, then it is very likely that over 2,000 men from Co Longford served in the Great War.”

Meanwhile, the 1911 Census indicates there were 43,000 people living in Co Longford.

These days it’s close to 40,000, so population wise and despite the passing of 100 years, the county has remained fairly consistent on that scale.

“Back then of course, Longford town was pretty much a garrison town,” added Ms Ni Chonghaile.

“There was also a military barracks in Granard, so we do get a lot of people involved from say, certain streets in Granard like Silver Street, Ball Alley Lane and Main Street.

“A lot of families in Longford would have had military backgrounds going back a few generations and for that reason, people were comfortable with their men in service.

“There was strength in numbers and those who came back were a significant number within the town.

“They had an Ex Servicemen’s Club her in Longford town by 1919 and that went on to become a branch of the British Legion.”