Longford to feature in new World War One book 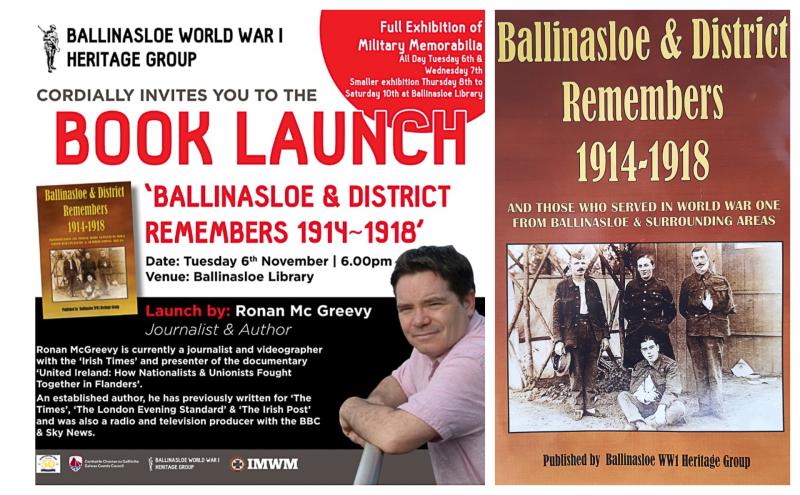 Longford to feature in new World War One book

Ballinasloe WW1 Heritage Group will host the launch of their book, Ballinasloe & District Remembers 1914-1918 on Tuesday, November 6 at 6pm in Ballinasloe Library.

The book is the culmination of five years work by the group and is a commemoration to mark the end of the Great War which occurred on the 11th hour of the 11th day in the 11th month of 1918. The book will be officially launched by well-known Irish Times Journalist, Ronan McGreevy.

The journey began with the restoration of a Roll of Honour which now hangs in Ballinasloe Library’s History Room.

While researching the eighty eight names on the Roll of Honour, countless other names were discovered and documented. The book gives an insight into the lives of those from Ballinasloe and surrounding areas, who served in WW1 and the lives of their families. In addition to the military records, there are photos and information on the families and also many chapters detailing life at the time.

It covers Ballinasloe town and its hinterlands from Mountbellew/Moylough, Tiernascragh, Ahascragh, Killure, Kiltormer, Laurencetown, Eyrecourt, Kilconnell, Aughrim, Moore and Taughmaconnell to name but a few.

While the book launch takes place at 6pm on November 6, there will be a week-long military display in the Church Gallery of the library from 11am Tuesday, November 6 until 5pm on Saturday, November 10,  closing from 1-2 for lunch.

On the Tuesday and Wednesday there will be a full military display with “soldiers” on hand to answer any questions and give hands on experience with the memorabilia. A slide show will also run alongside the display. A prearranged short talk can be arranged on any of the days.

Both primary and secondary schools are encouraged to schedule a visit, as are members of the public and admission is free.