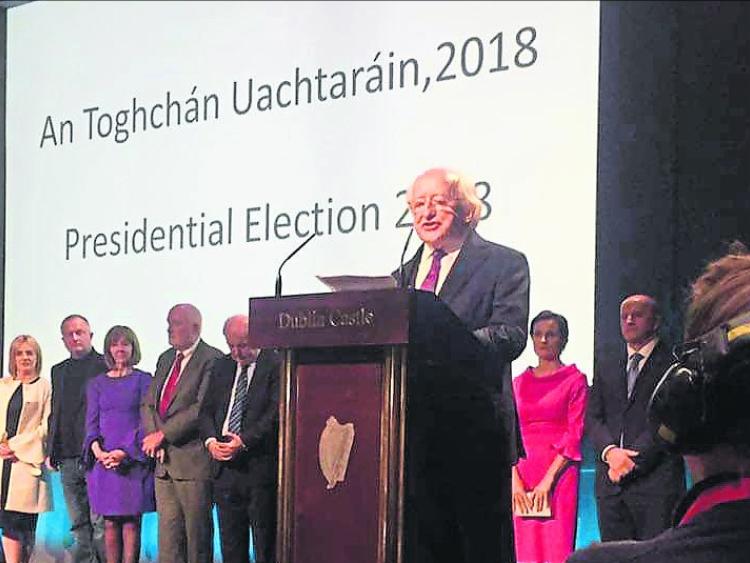 Michael D Higgins addresses onlookers in Dublin on Saturday evening as news of his re-election as President of Ireland is confirmed.

One of the most distinguishing features of the 2018 Presidential election and blasphemy referendum was the glaring obviousness of voters to stay away.

Just 41 per cent of Longford-Westmeath’s constituency took part in a campaign that never captured the public imagination its build-up had threatened.

Overall, 37,942 voters marked their ballot papers in favour of their preferred candidate out of a total electorate of 92,354.

When those figures were broken down further still, it conjured a final turnout of just 41 per cent, a considerable drop from the 53 per cent turnout of seven years earlier.

A bland collection of monotonous live debates led by a dour set of candidates didn’t exactly whet the political appetite of a disaffected electorate.

The absences of both the eventual clear winner, Michael D Higgins and the man seemingly best placed to take advantage of any slip-ups by the incumbent, Sean Gallagher in two of those verbal joustings did little to help the situation.

To compound matters further, not all of the candidates showed their faces in Longford or conducted media interviews in a bid to get their message across.

However, no conversations were held with either Joan Freeman or Peter Casey, making the impressive vote garnered by the latter in Longford all the more surprising.

It certainly played its part though in ensuring this side of the constituency registered one of the lowest turnouts ever witnessed for a presidential campaign.

By 10pm on Friday night, a count staff member stationed to a booth located in Longford town telephoned the Leader to reveal how just 40 per cent of registered voters had filed through its doors.

It summed up a campaign devoid of originality and one that will invariably go down as one of the most banal, uninspiring elections in living memory.