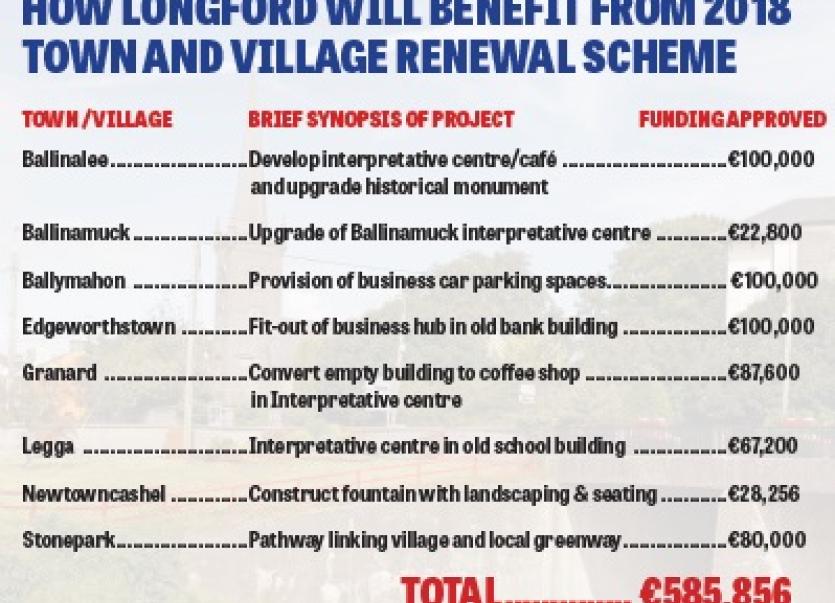 Eight towns and villages across Longford have been approved close to €600,000 under the Government's Town and Village Renewal Scheme.

Applications from towns, which can range from €20,000 to a maximum of €100,000, saw prospective ventures in Ballinalee, Ballymahon and Edgeworthstown secure the full six figure sum.

They provide for the development of an interpretative centre and café in the home parish of Longford Fine Gael general election candidate Cllr Micheal Carrigy alongside the upgrading of a historical monument.

In Edgeworthstown, Longford County Council's ongoing efforts to install a business hub inside the remnants of the town's former Ulster Bank premises received a boost when it too was awarded a €100,000 investment.

Minister for the Office of Public Works and Longford Westmeath Indepenent TD Kevin 'Boxer' Moran was the first to announce the news, adding that the dispersal of €100,000 for a for a car parking facility in Ballymahon was something he was especially pleased to see come to pass.

“I am also particularly pleased to see that the sum of €87,600 has been granted for the conversion of an empty building into a coffee shop in the Interpretative Centre,” he said, as he switched his focus to the continuing development of the Knights & Conquests Heritage & Visitor Centre in Granard.

His constituency counterpart and Fine Gael TD Peter Burke said the lateststream of funding was testimony to the Government's commitment towards putting an added spring in the step of rural Ireland.

“This investment will go a long way,” he maintained.

“I lobbied on behalf of a number of these projects, including the business hub for Edgeworthstown, which has been given €100,000 from the Minister.

“The business car parking is badly needed in Ballymahon, and a €100,000 will go a long way to facilitate this.”

His party colleagues at local level were just as enthused by the announcement.

Cllr Gerard Farrell said the €28,000 set aside for the development of a fountain in Newtowncashel, together with landscaping and seating enhancements had the promise of being a “huge addition” to the south Longford village.

The Lanesboro publican, together with Independent Cllr Mae Sexton, also took time to pay particular emphasis to the €80,000 which would go towards a pathway in Stonepark in order to link the village with the local greenway.

“I had a notice of motion in earlier this year that the footpath from the town right out to the village of Stonepark be completed as part of the overall outlined plan,” said Cllr Sexton.

For his part, Cllr Carrigy said the scale of the overall amounts distributed to various community groups was indicative of the spotlight that was now being thrust on rural Ireland and its future revivification.

“The Government’s commitment to supporting rural Ireland is further underscored through the new €1 billion Rural Regeneration and Development Fund which was launched this year as part of project Ireland 2040,” he outlined.

“This new Fund will provide an opportunity to deliver more integrated and ambitious projects, which will further support the revitalisation of our rural towns and villages in the coming years.”