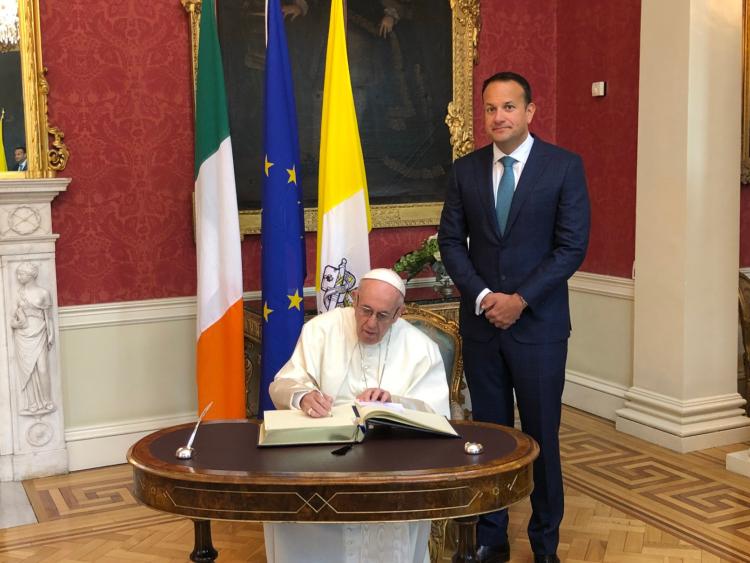 An Taoiseach, Leo Varadkar TD with Pope Francis as he signs the visitor book at Dublin Castle.

"Magdalene Laundries, Mother and Baby Homes, industrial schools, illegal adoptions and clerical child abuse are stains on our State, our society and also the Catholic Church," An Taoiseach, Leo Varadkar TD, said during his speech at Dublin Castle this morning on the occasion of the visit of Pope Francis.

Mr Varadkar added, "Wounds are still open and there is much to be done to bring about justice and truth and healing for victims and survivors."

And he issued this plea to Pope Francis, "Holy Father, I ask that you use your office and influence to ensure this is done here in Ireland and across the World."

Also read: Send us your photos from the Pope's visit to Ireland

Ireland today 'is a very different place than the one we had in the past' - @campaignforleo pic.twitter.com/kB6mtkQ9IL

Pope Francis signs the visitor book in Dublin Castle. While the Pope is visiting a very different Ireland to his predecessor in 1979, 78% of people here still identify as Catholic and faith remains an important part of many people’s lives. #popeinireland pic.twitter.com/EWMUcLwWn4

FULL TEXT OF AN TAOISEACH'S ADDRESS

Holy Father, on behalf of the Irish people, I want to greet you using one of the oldest blessings we use to welcome a special guest to Ireland - céad míle fáilte - one hundred thousand welcomes.

And, given the hundreds of thousands of people who will come out to see you, to hear you say mass, and to receive your blessing, I can think of no welcome more appropriate.

I know you spent a few weeks in Dublin in 1980 at the Jesuit centre in Milltown Park learning English, so we are delighted to welcome you back to Ireland.

1980 was a year after the visit of Pope John Paul II and we are so grateful that his prayers for peace on our island were eventually answered through the Good Friday Agreement.  A peace we will protect and nurture.

Today I am privileged to welcome representatives from all communities in Northern Ireland and from Britain here today.  Together we are guided by your words:
‘Make bridges, not walls, because walls fall’.

We are also joined here today by people from all walks of life, members of government and frontline public servants, those born here and those who have chosen to come here, men and women, young and old, Catholics, as well as members of other faiths and none.

We all share a common home – and it is our duty to nurture this planet and look after its people.
Holy Father, we thank you for your care for the earth, for emphasising the urgent challenge of climate change, and for reminding us of our responsibilities.  We thank you for the empathy you have shown for the poor, for migrants, and for refugees.

Although you are here principally for a Pastoral Visit in the form of the World Meeting of Families in Dublin, we are grateful that you have found time to do other things, including this event in Dublin Castle, a visit to our President, and mass in the Phoenix Park.  We are also delighted that you are taking time to visit the shrine at Knock, and we hope that, during a future visit, it will be possible for you to travel to Northern Ireland.

The Christian faith inspired many of the people, Catholic and Protestant, who led our campaigns for freedom and independence.  Indeed both the 1916 Proclamation of Independence and the Constitution invoke God in their opening lines.  In more recent years, Christian Democracy and Christian ideas also helped to inform and guide the founders of the European Union inspiring a continent to abandon war in favour of ever closer co-operation.

The Catholic Church has always helped us to understand that we are citizens of a wider world and part of a global family.

Our brave missionary priests and nuns provided an education to many around the world, and helped the sick, the poor and the vulnerable.  Today our UN peacekeepers and our international development workers around the world follow in that proud tradition, and charities like Trócaire and Concern help those who suffer from famine today, and also refugees.

People of profound Christian faith provided education to our children when the State did not, in the open air next to hedgerows and in the schools and educational institutions they built.  They founded our oldest hospitals, staffed them, and provided welfare for so many of our people.  We think of the many wonderful organizations today who continue that work, like St. Vincent de Paul to name just one.

These are now our two largest and best funded Government Departments accounting for more than half of Government spending between them today.  Providing healthcare, education and welfare is now considered a core function of our State.  When the state was founded, it was not.  The Catholic Church filled that gap to the benefit of many generations of our people.  We remain profoundly grateful for that contribution.

Even today, as we struggle with a housing shortage and homelessness, Catholic organizations and people inspired by their Catholic faith fill a gap in providing services, for example, through organizations like CrossCare.

Holy Father, during your papacy, we have all witnessed your compassion for those on the edge of our society, those who have not shared in our relative prosperity, those you have slipped through the net.

Your visit to the Capuchin Day Centre later today reminds us of work we still have to do to ensure that the promise of the New Testament is fulfilled, that we rejoice with the truth, always protect, always trust, always hope, always persevere.  And never fail.

At times in the past we have failed.  There are ‘dark aspects’ of the Catholic Church’s history, as one of our bishops recently said.  We think of the words of the Psalm which tells us that ‘children are a heritage from the Lord’ and we remember the way the failures of both Church and State and wider society created a bitter and broken heritage for so many, leaving a legacy of pain and suffering.

It is a history of sorrow and shame.

In place of Christian charity, forgiveness and compassion, far too often there was judgement, severity and cruelty, in particular, towards women and children and those on the margins.

Magdalene Laundries, Mother and Baby Homes, industrial schools, illegal adoptions and clerical child abuse are stains on our State, our society and also the Catholic Church.  Wounds are still open and there is much to be done to bring about justice and truth and healing for victims and survivors.

Holy Father, I ask that you use your office and influence to ensure this is done here in Ireland and across the World.

In recent weeks, we have all listened to heart-breaking stories from Pennsylvania of brutal crimes perpetrated by people within the Catholic Church, and then obscured to protect the institution at the expense of innocent victims.  It is a story all too tragically familiar here in Ireland.

There can only be zero tolerance for those who abuse innocent children or who facilitate that abuse.

We must now ensure that from words flow actions.

Above all, Holy Father, I ask to you to listen to the victims.

The Ireland of the 21st century is a very different place today than it was in the past.  Ireland is increasingly diverse.
One in six of us were not born here, and there are more and more people who adhere to other faiths, or who are comfortable in declaring that they subscribe to no organised religion.

We have voted in our parliament and by referendum to modernise our laws - understanding that marriages do not always work, that women should make their own decisions, and that families come in many forms including those headed by a grandparent, lone parent or same-sex parents or parents who are divorced.

Building on our intertwined history, and learning from our shared mistakes, it can be one in which religion is no longer at the centre of our society, but in which it still has an important place.

One with greater diversity and choice when it comes to the patronage of our schools – and where publicly-funded hospitals are imbued with a civic and scientific ethos.

Ireland is a different country than it was 39 years ago.  Modern Ireland is still a country with faith and spirit and values.  Family, community, enterprise, social justice, diversity, openness and internationalism, equality before the law, and individual liberty -these values describe the Republic we aspire to be.

We thank you for your visit, and ask for your prayers as we start on that journey together.

Your visit has caused many of us to reflect further and more deeply on the relationship between Ireland and the Roman Catholic Church, a faith brought to Ireland centuries ago.

In the 6th century it was an Irish poet, scholar and monk, St. Columbanus, who brought the message of the gospel back to the continent.  Because of his work he has been called Ireland’s first European and ‘the patron saint of all who seek to construct a united Europe’.